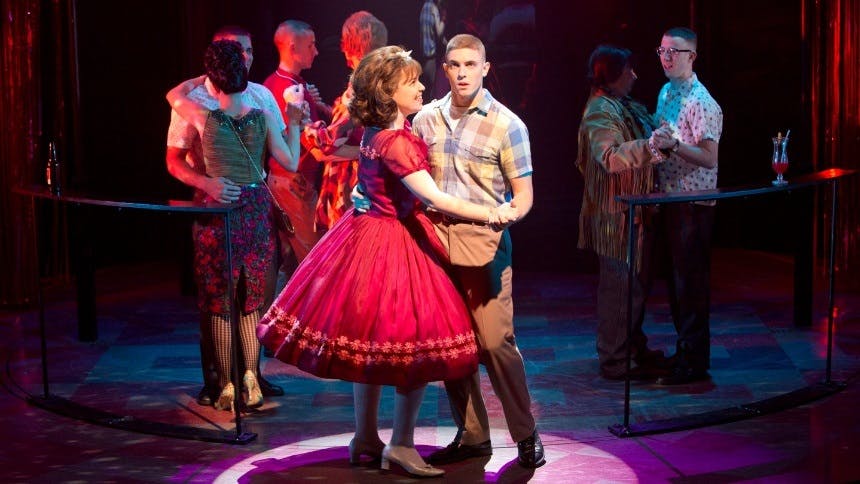 
Ulterior Motives: Before Dear Evan Hansen, before The Greatest Showman - there was Dogfight. Nine years ago, Second Stage Theatre was celebrating the July 16th opening night of the new Benj Pasek and Justin Paul musical Dogfight. The Off-Broadway musical with a book by Peter Duchan, direction by Joe Mantello and choreography by Christopher Gattelli had quite a cast! The musical starred Lindsay Mendez as Rose Fenny and Derek Klena portraying as Eddie Birdlace plus theater mainstays Josh Segarra, Nick Blaemire and future Tony Award winner Annaleigh Ashford. The musical set in the 1960's follows three Marines in San Francisco (portrayed by Klena, Segarra and Blaemire) who decide to play a really mean game looking for unattractive women to bring to a party for prize money. Derek's character Eddie Birdlace crosses paths with Rose Fenny (Lindsay Mendez) and their story begins over a period of four years including Eddie's participation in the Vietnam War. In honor of the show's opening night, we found this wonderful clip from earlier this year of Derek sharing his memories of the Off-Broadway production.

Ultimate 🙌 🙌 moment: At 2:49, we loved hearing Derek recall his final callback with Lindsay with such admiration and then how they became teammates over a between show dinner. It's wonderful to see these clips of the show once again. Thank goodness we have a cast album! Our favorite ultimate moment would have to be "First Date/Last Night." It's such a quiet moment and Derek says it himself at 5:20. The song and scene are so special to the show and the characters' journeys.