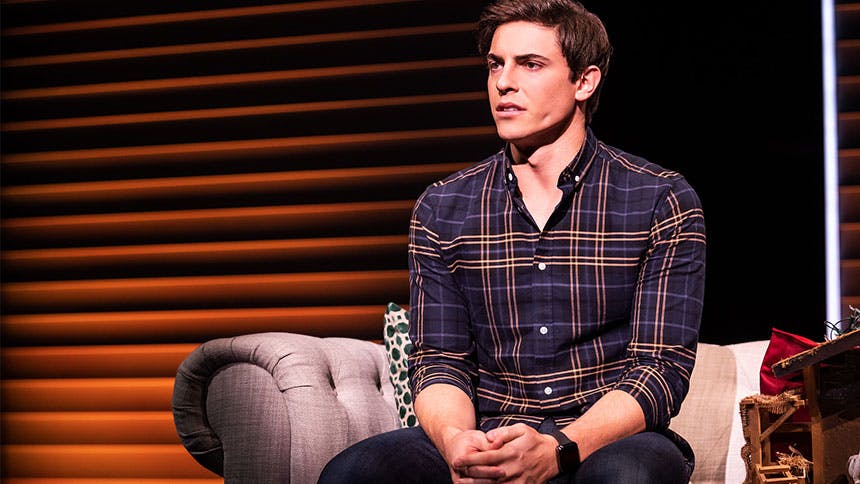 . Nick is a the perfect kid—a loving son and an all-star athlete, well on his way to an Ivy League school—when everything falls apart after one drunken high school party. His live performance of the Alanis Morrissette song "Perfect" will give you chills.


BroadwayBox chatted with Klena (who previously starred in Broadway's Anastasia, Wicked, Bridges of Madison County, and off-Broadway's Dogfight) about how the cast handles the heavy material in Jagged, advice for his 2012 self, and why he'd love to sit down with Hugh Jackman.

1. What is it about Jagged Little Pill and the character of Nick that you wanted to spend years of your life with this project (between workshops, out of town, and now Broadway)?
Obviously, the first thing that attracted me to the show when I got the offer for the first reading was this amazing team. It's kind of an embarrassment of riches in that room between all of our creators and, of course, Alanis' music. So, I jumped at that opportunity to work with everybody in the room. And then, once I found out the story that we were telling and types of issues that we were dealing with, and how powerful this story is, I knew I had to be a part of it.

I also recognized early on, there's a lot of similarities between the character Nick and who I am, and some of the things I've experienced in my life. So, I felt drawn to the character in that aspect as well. I developed a kind of ownership of it, and I'm proud to be working on this piece and telling the stories.

2. Diablo Cody wrote you a heavy track in this show. Does Nick’s arc take its toll on you? Are you good at leaving the weight of him at the Broadhurst? What do you do?
Yeah, I think that's the challenge with our show. My track in particular is pretty heavy, but many of the roles in the show deal with a lot of heavy material and take a lot emotionally and physically. So, during previews and in the early part of the run, that was a challenge, definitely—getting the show in our body, knowing what we needed to do to get in that mental and emotional place every night. But, I think that the thing that makes it easier and more manageable is being proud of the type of story that we're telling and the amount of focus that's involved to deliver the message respectfully as possible. That's a challenge, but it's also a huge responsibility and a privilege. We take that seriously, and that kind of helps us.
In a show where everyone has heavy tracks, is backstage lighter to try to counterbalance it or does it feel more somber?
It can be. There's only so much we can do. I think taking backstage and rehearsal times a little lighter helps to counter how serious the show can be. Me and Kathryn Gallagher hit it off and we're buds backstage, but our tracks intersect in the show at some crucial points. So, we try to lighten it up off stage, but there are parts of the show where Kathryn and I have an understanding that we can't really interact or joke around much or else we won't be able to do our job as successfully on stage. So, we manage it, but, all in all, we're a very close company. We get along super well, and I feel like maintaining that positive energy and unity in the building has been the secret to our success and everyone staying on the same page.

3. You've been on the scene now for eight years now—your breakout season of Carrie and Dogfight was 2012. What's one thing you know now that you wish you can go back and tell 2012 Derek?
Oh, so many things. I came to the city so young, and I think there are parts of my journey that I'm glad that I was naive to, in a way. The magnitude of some of the auditions that I've had and the experiences I've had—I'm grateful that I was naive to how big those were. Like my auditions for Dogfight, I really didn't know what I was getting myself into and that ended up being one of the most influential experiences in my life.

I think over the years I've learned—and I continue to learn—a lot about myself, but the thing that I would want to give myself eight years ago was how I prepare. I think the way I prepare for auditions and for roles and characters now is totally different than I did then. I didn't have a full understanding of how complex it can be and the different layers. Through every experience that I've had, I learned a little bit more of how to delve deeper, how to really do the research and find those characters, and how to deliver them every night successfully for long periods of time. So, I would give myself tips on how to prepare better.

4. So, jumping topics completely differently, tell me about the last TV show that you were obsessed with and recommending to your friends and family.
Oh, man. Cheer! I feel like it's the trending Netflix show right now, and we've just binged through it. We were late to the party on that one, because everybody had already seen it. But, we watched it and it reaffirmed that yes, it is an amazing show. Anybody who hasn't seen it, should.
Did you find yourself so invested in their journeys and who made it to mat?
Yeah! And you want to help them. They just do it because they love it, and you want to make sure that they keep doing what they love and they find the means to do that. It was an amazing show because it does touch on life outside of cheerleading–where they grew up and what they're going to do after cheerleading. As a viewer, you get invested and feel a responsibility to root for these people and hope that they find success after cheerleading. It definitely tugs at your heartstrings, and I was definitely rooting for them.

5. Finally, if you could sit down and interview any actor you admire, who would you want to sit and talk with?
Oh, gosh. Probably, Hugh Jackman. I admire him and the career that he's had. I admire how he's maintained a healthy personal life and also has remained so well-respected. Every decision he makes seems to be very careful and positive. He's had so many different experiences. I would just love to pick his brain on his life—from being Wolverine to having this very successful musical theater and touring life. He's just done everything. There's so much that I respect about him and so much I would want to know.

Jagged Little Pill
Best Priced Tickets
Newer
Check Out These Fresh, Fetch Character Portraits of the New Mean Girls Stars
Older
Steven Sater Talks Adapting Alice By Heart From Musical to YA Novel, the Future of the Show, and What's Actually Happening with the Spring Awakening Movie
Sign up for BroadwayBox Discount Alerts