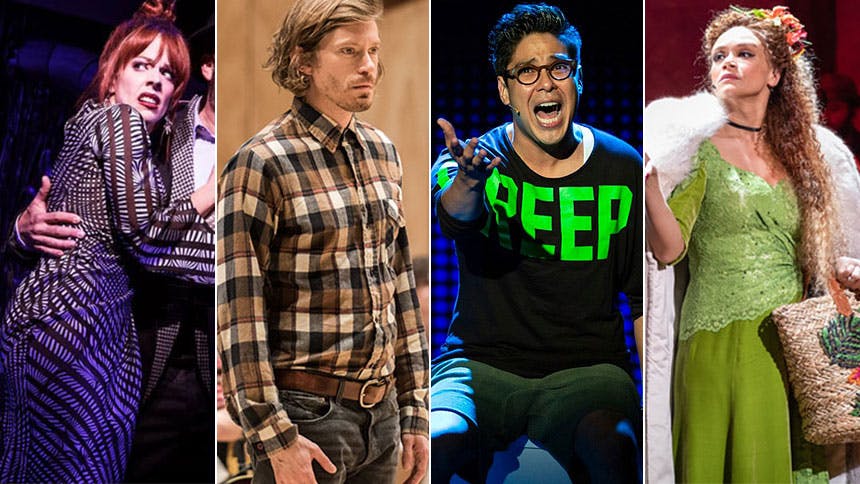 For a select group of theatre nerds (like myself), there's nothing more exciting and satisfying than a featured character who comes in, mesmerizes the audience, and steals the show. In the fall, we saw fantastic featured performances from Bonnie Milligan in Head Over Heels, Robin de Jesus in The Boys in the Band, Mercedes Ruehl in Torch Song, and Micaela Diamond & Jarrod Spector in The Cher Show. Now, despite some snow still on the ground, it is in fact the spring on Broadway, and looking ahead to this season, here are 10 featured performances that we are beyond excited to experience (presented alphabetically by show).

George Salazar as Michael Mell in Be More Chill


It wouldn’t be the craziest thing to say that Be More Chill is on Broadway today partly because of George Salazar and his performance of the Joe Iconis showstopper “Michael in the Bathroom”. The video has over 3 million views on YouTube and sparked a social media revolution and die-hard fandom. He is to this musical what Frances Ruffelle was to Eponine & Les Miserables in the 1980s. Lots of hype, but the Godspell, tick, tick...BOOM, Here Lies Love and Lightning Thief alum truly delivered in the off-Broadway run. His performance was charming and funny and his vocals were beyond next level. Can’t wait to see what happens for George and BMC this spring on Broadway!


It’s about damn time that we all bend at the knee of Queen Kritzer. She has long been a musical comedy secret weapon, from her now infamous Fanny Brice at Paper Mill to her Lortel-winning performance in RTC’s The Robber Bridegroom revival (not to mention her amazing recreation Patti LuPone’s Les Mouches cabaret). In Beetlejuice, she finally gets that juicy, hilarious, high-profile Broadway role. I truly can’t wait to see her spin on this lovably demented character made famous by comedy genius Catherine O’Hara in the film.

Brandon Uranowitz as Larry in Burn This


Two-time Tony nominee Brandon Uranowitz has quickly built a reputation as one of Broadway’s most talented men of his generation. He made his Broadway debut in 2011 in Baby It’s You, and then he landed his breakout Tony-nominated role in An American in Paris in 2015. From there, he’s been busy starring as Mendel in the first revival of Falsettos (another Tony nom), losing himself in a dozen iconic roles in Prince of Broadway, and then jumping into the Tony-winning musical The Band’s Visit. This spring, he co-stars in the scene-stealing role of Larry (the hilarious gay roommate to Keri Russell’s Anna) in the first Broadway revival of Burn This. The role earned its originator, Lou Liberatore, a Tony nomination, and we eagerly await to see what Brandon brings to it.

Julie White as Carol in Gary: A Sequel To Titus Andronicus


In a crazy turn of events, Andrea Martin injures herself and departs Broadway’s Gary. The always perfect Kristine Nielsen steps up and takes her role, and then—as if a gift from Heaven—Tony winner Julie White joins as Carol (Nielsen’s original role). If you have seen Julie White onstage, you know she is a supernova. Her performances are always hilarious and always grounded in truth, from The Little Dog Laughed to Airline Highway. She made Vanya and Sonia and Masha and Spike and A Doll’s House, Part 2 better shows when she joined. Just imagine what she is going to deliver in Taylor Mac’s new comedy Gary.

Amber Gray as Persephone in Hadestown


It’s no secret that Amber Gray stole The Great Comet for me. Her performance as Helene was masterful, but it was an appetizer for the meal she is serving as Persephone in the new musical Hadestown. From her incredible entrance to her quieter moments with co-star Patrick Page, this is the kind of featured performance where you can’t wait for that character to return to stage. Broadway get ready for Amber Gray.


Her last name says it all. Time and time again, Elizabeth Marvel has shown herself to be one of the finest actresses working, whether onstage or onscreen. And the thing about Elizabeth is, she’s best when she’s bad; and there’s no badder bitch than Shakespeare’s Goneril, the manipulative and cunning eldest daughter to the king. It’s going to be something to watch Elizabeth Marvel dig her teeth into this wicked woman.

Corbin Bleu as Lucentio/Bill Calhoun in Kiss Me, Kate


Corbin Bleu is having a moment in Kiss Me, Kate, and, boy, does he have it coming. He broke out in the High School Musical franchise and then quickly proved his musical chops onstage leading the Broadway productions of In the Heights and Godspell and The Muny’s Singin’ in the Rain. He gained a lot of attention for his incredible moves in RTC’s Holiday Inn, and now he’s living his best life in Kiss Me, Kate. His insane tap number “Bianca” is going to be the talk of the town this spring.

Ali Stroker as Ado Annie in in Oklahoma!


Ali Stroker came to musical fans' attention with her breakout appearance on the reality competition The Glee Project and then her subsequent arc on the TV series Glee. She made her Broadway debut (and history) in Michael Arden’s Spring Awakening, and now she takes on the classic role of Ado Annie in this must-see revisionist Oklahoma! Hearing her powerful voice sing stripped down versions of these beloved R&H tunes is going to be a treat, but even better is going to be watching her nail this comedy.


Patrick Vaill made his Broadway debut in the ensemble of LCT’s Macbeth, and he’s about to have a full-out breakthrough moment as Jud Fry in the reimagined Oklahoma! revival. He has been with the production since its premiere at Bard College's annual SummerScape, and his performance is a complete overhaul on this Tony-winning character you thought you knew. There’s no way to talk about how electrifyingly different this Oklahoma! is without also talking about Patrick’s Jud Fry.


Sarah Stiles is a Tony nominee for her hilarious star-turn in Hand to God, and she’s had us laughing with her incredibly unique and funny delivery in musicals like Avenue Q, Spelling Bee, On a Clear Day, and Into the Woods. Now, she has a role that she could knock out the park in a million different ways. In Tootsie, she plays a wildly insecure actress by the name of Sandy Lester. The role earned Teri Garr an Oscar nomination for her LOL portrayal in the film, and no doubt Sarah is going to match that bet and then raise it.