Introduce Your Self(ie): 10 Questions with An American in Paris Standout Brandon Uranowitz 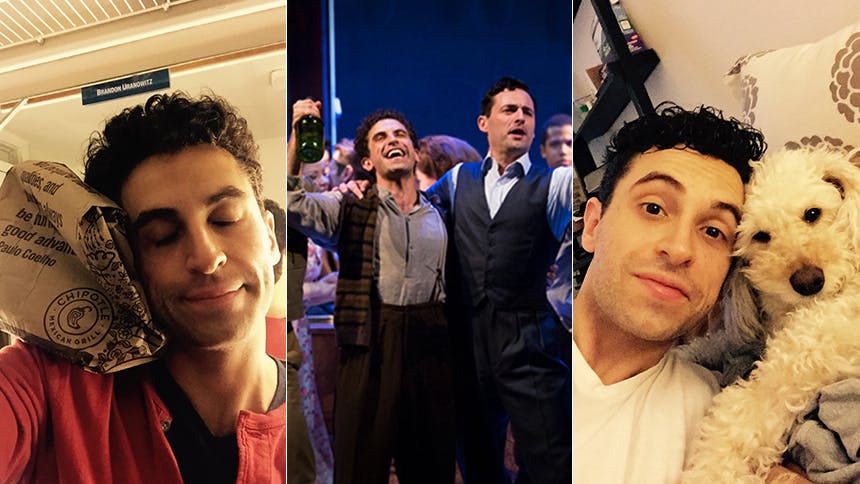 Brandon Uranowitz returns to Broadway this spring as the lovable composer (narrator and, some would argue, title character) Adam Hochberg in the stunning new musical An American in Paris.

Below, the Baby It’s You! vet shares with BroadwayBox his Sister Act 2 dreams, piano panic attack triggers and why Abby Lee Miller should totally spend a night at the Palace Theatre.

1. True or false: I can actually play the piano:
Truuue-ish? I played as a kid, and can still play some basic piano (rebelling against my mother's demands to practice haunts me to this day). But if you asked me to drop everything and play my favorite piano concerto I'd have a panic attack.

2. Modern musical theatre composer who rocks my world:
Michael R. Jackson. YouTube him immediately. I did a musical of his (co-written with Rachel Peters) at NYU called Only Children—the only time I've ever been fully nude on stage (never again, please and thank you). Michael has one of the most fearless and honest points of view in musical theatre writing today, in my opinion.

3. Favorite French food:
I mean, that's impossible. BUT, there was a patisserie near my apartment in Paris called Stohrer that made an almond croissant that could make you cry. I had to walk a different route to the Châtelet some days just to avoid eating too many. I'm not kidding.

4. If someone were attending a Brandon Uranowitz concert, they would most definitely hear the song:
The final, competition-winning choral performance from Sister Act 2. Including the pre-show backstage banter and the post-show confrontation between Rita and her mom. Duh.

5. Reality TV show I can’t get enough of:
I don't watch reality TV... THAT'S SUCH A LIE. The answer is obviously Dance Moms. But, shhhh, please do not tell Christopher Wheeldon.

6. My go-to Seamless order:
Checking my current (EXTENSIVE) order history. And right now, I'm being told it's Aperture—an Italian place in my neighborhood. The Cavatelli is nailing it.

7. My New York City happy place:
The new apartment that I share with my boyfriend Zach and my stepdog, Bessie. It's also steps away from the Promenade in Brooklyn Heights, which might be the most magical place in New York City.

8. Gershwin song that always moves me when I hear it:
“But Not For Me.” And, the “An American in Paris Symphony.” It's perfect.

9. Starring in Torch Song Trilogy taught me:
Confidence. 99.999% of working in this business is being told "no." And while it thickens the skin, that much perpetual rejection takes a pretty serious toll. Full disclosure: I've come extremely close to quitting the business a number of times, simply thinking I was neither wanted nor needed. And when the director Michael Kahn—who indirectly said "no" to me when I auditioned for Juilliard at 17—offered me the role in the room at my final callback, I remembered that I'm enough. And that confidence only made the work and experience that much more rewarding.

10. The best part of growing up in the Garden State:
Being close enough to see lots Broadway shows and eating at Pal's Cabin with my family. We all fully mourned its closing last year.