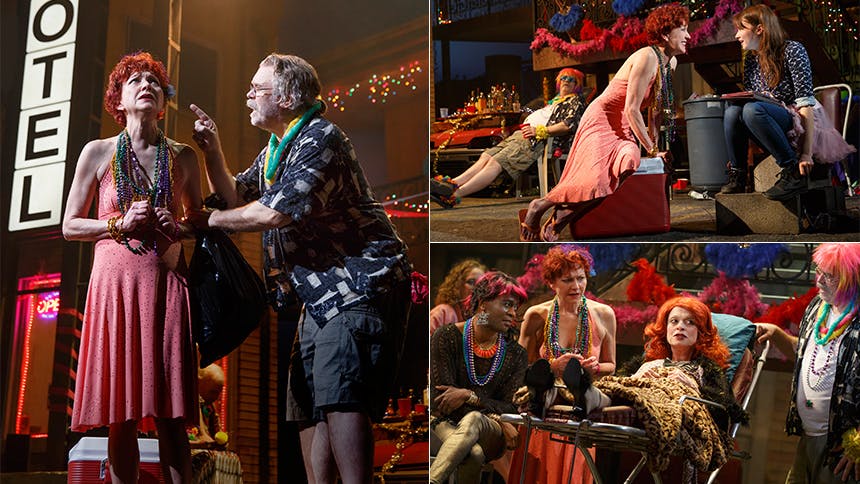 It’s hard to believe the formidable talent Julie White has only been on Broadway four times: the original Tony-winning production of The Heidi Chronicles, her Tony Award-winning star turn as the agent from hell in The Little Dog Laughed, as the pitch-perfect Masha in the Tony-winning Vanya and Sonia and Masha and Spike and now as Tanya, a NOLA hooker struggling to stay sober as she throws a living funeral for the matriarch of their ragtag community, in MTC & Steppenwolf’s can’t-miss new American play Airline Highway.

Below, BroadwayBox chats with the stage and screen favorite about playing a craigslist hooker, bug spraying her Tony and her dream TV gig: The Bachelorette.

1. The last time we talked, you mentioned Tanya was a craigslist hooker. What do you think her ad says?
I think Tanya is probably technologically challenged so maybe she had Krista help her with it. I feel its pretty bare bone; it just might be: for a good time call.

2. What is the most challenging and rewarding part of playing a character as complicated as Tanya?
It really is a roller-coaster. Now that I’m doing it, I’m like, ‘oof, this is hard.’ The challenge I have found has been to leave the character at the stage door and not let her come home with me. I need to get better at it. And the reward is that I don't often get to do a play with so many people. It’s great to have all these connections and interactions with all these other actors on stage. And a lot of them aren’t really scripted ‘cause it’s not that kind of play, so it’s about discovering and deepening those connections and creating that crazy dysfunctional family of which I guess I’m Mary Tyrone. That has been really rewarding.

3. I live for your amazing Tony speech (working that gown). Where do you keep "the tchotchke"?
In my apartment in Brooklyn, I never had any place good for it but I recently moved up to Cortland Manor, New York—up the Hudson and I encourage everyone to do the same—and it has all these beautiful old built-in paneling and shelves in the living room and dining room. I could move it from shelf to shelf.

It’s such an amazing item to have but you actually don't think about it much until you have people over who want to hold the Tony. The best place it has been was, right after I won it, I went to Texas to the family ranch we had it sitting on an ice chest by the Cherokee Creek. I think I have the only Tony with bug spray on it.

4. What's the trashiest TV show you love?
The Bachelor. I watch The Bachelor and The Bachelorette with my daughter Alex in San Francisco and her friend Jaclyn in Austin, Texas. We have this text chain just commenting ad nauseam as if we are sociologists or something. We have so much to say about The Bachelor and Bachelorette. Why cant there be a 53-year-old Bachelorette? I think it would be big, especially if it was me. I think Lifetime should pick that up. Come on! Somebody make that happen.

5. I love that Tanya was so obsessed with Francis bringing the right chips to Miss Ruby's party; what do you need to have at a party to have a good time?
I love parties that have a theme and an event that you’re watching. I throw a really good Oscar party. There has to be a real involved game and scoring system. I’ve thrown parties to watch the Westminster Kennel Club dog show, in which there is a betting bowl and you have to call your dog. ‘I get the springer spaniel for $500!’ I’m a big party thrower; I love to cook. So that aspect of Tanya—who wants to throw a kickass party—is very much me. It's a very Southern girl thing.

Do not let the opportunity pass you by to see Julie White’s performance in ‘Airline Highway.’