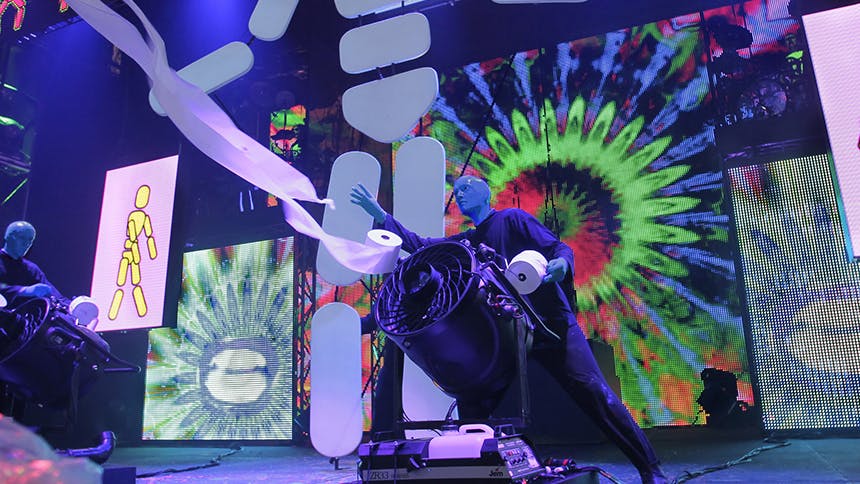 Just about everyone can close their eyes and clearly picture the characters of Blue Man Group, but not many know these fun facts about the international sensation.


Blue Man Group was co-created Chris Wink, Phil Stanton, and Matt Goldman. Wink and Goldman knew each other since middle school and they met Stanton in 1986 at college. The group first started performing at iconic and experimental off-Broadway spots like LaMaMa and PS 122. Then in 1988, they did a performance piece titled a “Funeral for the 80’s” where they marched through Central Park burning what they considered some of the worst aspects of the decade, including a Rambo doll and a piece of the Berlin Wall. The event was captured by MTV correspondent Kurt Loder, and the group took off. By 1991, Wink, Stanton, and Goldman had opened Blue Man Group at their home on Astor Place. They won an OBIE Award and a Drama Desk Award. For the first three years on Astor Place, the show’s three creators and stars performed without understudies. In 2004, the trio founded The Blue School, a progressive private school in New York City which aimed to reimagine the approach to education by putting creativity and community first.

Why You So Blue?


The name “blue man” was apparently born because of its similarity to the word “human”. Cool, right? The trio of creators were also inspired by the French painter and performance artist Yves Klein, known for his continued work with the color blue. In fact, Klein invented a color “Yves Klein blue”, and the Blue Men wear that shade in the show to stay shiny and blue (the greasepaint they wear over their bald caps also helps with the shine!). The show uses about 28 cakes of blue makeup a week, and it typically takes Blue Men an hour to get into makeup for the 90-minute show—that’s dedication.


Everyone loves some numbers thrown at them, so here they come: Blue Man Group uses eight boxes of Cap’n Crunch, 385 marshmallows, 40 pieces of white chocolate, 44 boxes of twinkle lights, and 32 pounds of Jell-O a week. Also, since drumming is such an integral part of the piece, nearly 70 drums are used in each production of Blue Man Group.

Blue Man Group for All


Blue Man Group teamed up with Autism Speaks (the world's leading autism science and advocacy organization) to present special autism-friendly performances since 2014. The show makes slight sensory-friendly modifications to better accommodate children with autism, such as reducing sound and light levels, providing earplugs, and including less chair-walking and audience interaction. During these performances, the lobby serves as a quiet, soothing space for anyone desiring a break from the stimulation. Also at these performances, a portion of the proceeds foes to Autisim Speaks.

What You Need to Know to Audition


Here’s what you need to know about joining the show. Blue Man Group holds auditions throughout the year, nationally and internationally, and individuals auditioning should have acting and drumming/instrumental skills. Blue Man Group hires union and non-union actors, so anyone can audition—though there is a height requirement. You need to be between 5’10” and 6’2″. Once chosen, Blue Men attend a five-week boot camp in NYC where they learn to spew paint, throw and catch marshmallows, play the tubes and more! If you don’t read music, don’t worry. Blue Man Group has a tradition of passing down music orally and by demonstration and not by sheet music.