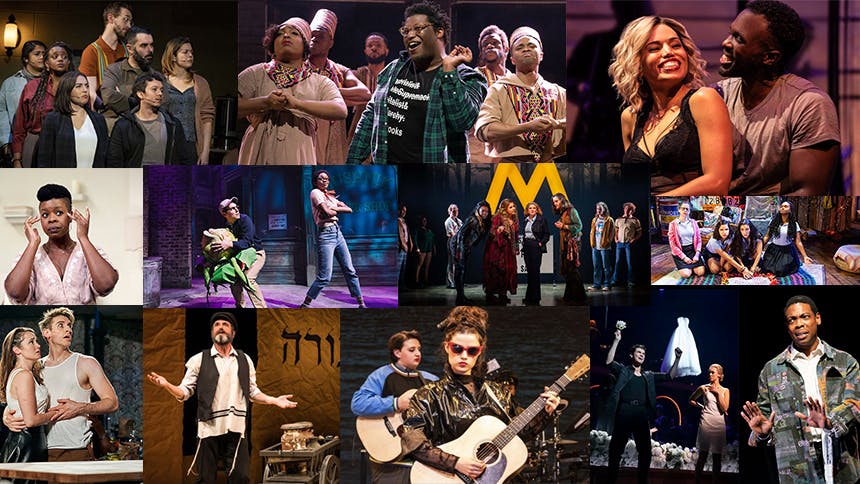 Everyone knows some of the best work in the New York theatre scene happens off-Broadway, especially at the subscription houses and non-profits, where daring new work can leave audiences shaken. Scroll on as Bbox looks back on a dozen incredible off-Broadway productions from 2019, and what made each so special. This isn’t as much a best of list, since seeing all the off-Broadway options feels impossible, this is just a spotlight of what stood out in the crowd.


Playwrights Horizon’s production of Michael R. Jackson’s meta-musical A Strange Loop is not only the most memorable off-Broadway show of the year, it was also the best. Filled with humor, heart, and a harsh reality, the examination of Usher, a fem gay Black man of a certain size, was revolutionary. When have we seen this character or heard this story before? Larry Owens gave a star is born performance as Usher—his “Inner White Girl” is instantly iconic. Like the Pulitzer-winning Fairview, it made you check your white privilege in a real, immediate way. Let’s hope Broadway audiences see it in 2020.


Theatre For a New Audience’s remounting of the Pulitzer Prize-winning play Fairview was incredibly memorable. As each act unfolded, the audience was left wondering what was happening (much like the brilliant Slave Play), and then the final audience-splitting pay off was shocking and important. It was a great year, during the wildness of American politics, to have your privilege checked at the theatre—Fairview, Slave Play and A Strange Loop all had something very important to say about the African American experience in even post Obama America, and I feel like a better person for having seen them.

3. Fiddler on the Roof in Yiddish


Yiddish Fiddler, as it’s known around town, earned its reputation as “the best Fiddler on the Roof you’ll ever see". The simple Joel Grey-helmed production is the musical you love, performed in Yiddish with subtitles and somehow it is the most real, moving production I’ve seen. Much of the credit goes to the central performance of Steven Skybell as Tevye. In his next talk with God, I hope Tveye asks PBS Great Performances to record this Fiddler.


The one-act Ross Golan musical really worked for me on every level. Joshua Henry and Ciara Renee gave career best performances (and both have been pretty incredible before) and it was a breakout performance for Ryan Vasquez. The Travis Wall choreography helped raise the book and tell the story in a beautiful, visual way. I hope there’s an MCC cast recording coming soon so we can all fall in love with The Wrong Man like we did with the cult off-Broadway musicals Songs for a New World and The Last Five Years.


Anyone who saw The Great Comet knows Dave Malloy is a genius, but Octet felt like going all in on a winning hand. The intimate eight-person a cappella musical about our addictions to our cell phones and the internet was so incredibly special and well-done. I don’t know if it belongs on Broadway but it has a place in the heart of every audience member who experienced it at Signature Theatre.


Much like The Wolves or Dance Nation before it, our Dear Dead Drug Lord was about teenage girls, their bonds, and their unleashed power. This disturbing, mysterious thriller had four unbelievable lead performances, and a third act that’s impossible to erase from your memory. 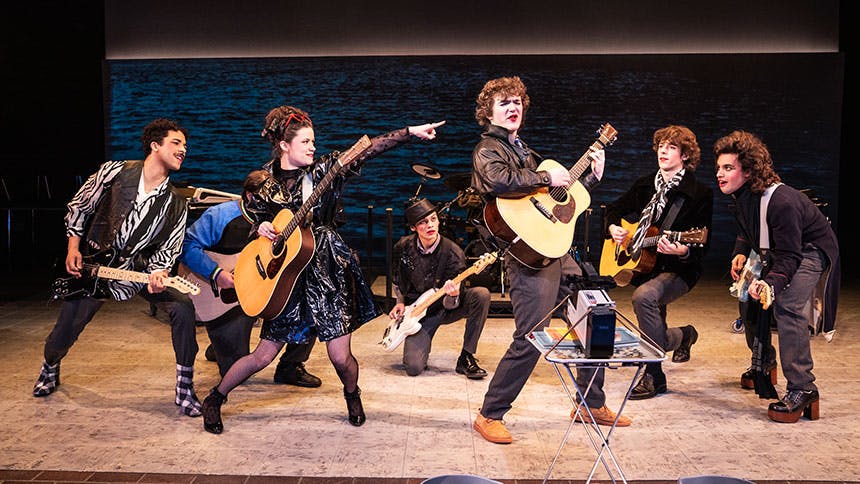 
New York Theatre Workshop recaptured lightning in a bottle with their new musical adaptation of Sing Street. Like Once before it, Sing Street is an intimate Irish musical with mass appeal. The performances were so well-crafted and the music was just electrifying—seeing those kids play in that band brought real joy.


Encores! limited revival of Evita this fall was just what the doctor prescribed. The clever staging by Sammi Cannold offered a fresh look at ALW’s beloved musical and Solea Pfeiffer and Jason Gotay gave breakout performances as Eva Peron and Che. The talented pair delivered everything Evita could want—vocals on vocals, passionate acting, all the moments and more.

9. Fires in the Mirror


Michael Benjamin Washington gave one of the most memorable and strongest performances of 2019 in the Signature Theatre revival of Anna Deavere Smith's one-person play about the 1991 Crown Heights riots and the relationship between the Black and Jewish communities living there. Watching him transform between 25 characters was intoxicating. This is why you go to the theatre.


In my time, I have seen more productions of A Midsummer Night's Dream than there are names in the Bible, but this immersive production from Food of Love & Third Rail Projects will stick with me for years to come. It was so fresh and alive. You felt the magic of Shakespeare’s love story all around you—and the performers were as good as the best Public Theater Shakespeare show. It was a dream I never wanted to wake from. 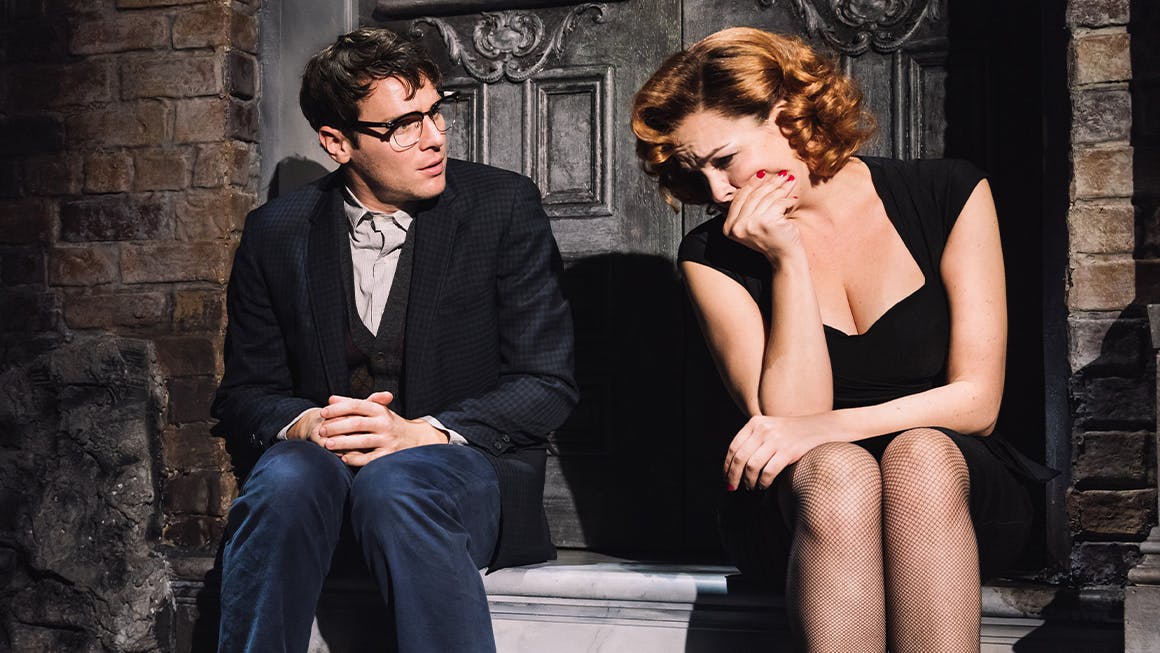 Tammy Blanchard and Jonathan Groff in Little Shop of Horrors

Seeing Alan Menken and Howard Ashman’s jewel in the small, off-Broadway Westside Theatre felt like being a part of something long past that you learned about in stories. A trio of Broadway headliners brought these beloved characters back to their off-Broadway roots, but here the Michae Mayer production is the real star. Like environmental Sweeney downtown, you can recast this a dozen different ways and not lose a single thing. Long live Audrey II!


Roundabout’s off-Broadway musical take on Macbeth was a joyful surprise—this fast food 1970s Macbeth was a total happy meal in large part thanks to the fantastic cast. Ryan McCartan was a true stage star, finally; the sky’s the limit for Taylor Iman Jones; and Jay Armstrong Johnson needs to be nominated for all the big off-Broadway awards in 2020. It was weird but in a wonderful off-Broadway way, like Bat Boy and the great musicals of the early 2000s. This is what the true off-Broadway musical is for—not a springboard to Broadway, just a cool, funky musical for theatre fans.

Fiddler on the Roof in Yiddish
Best Priced Tickets