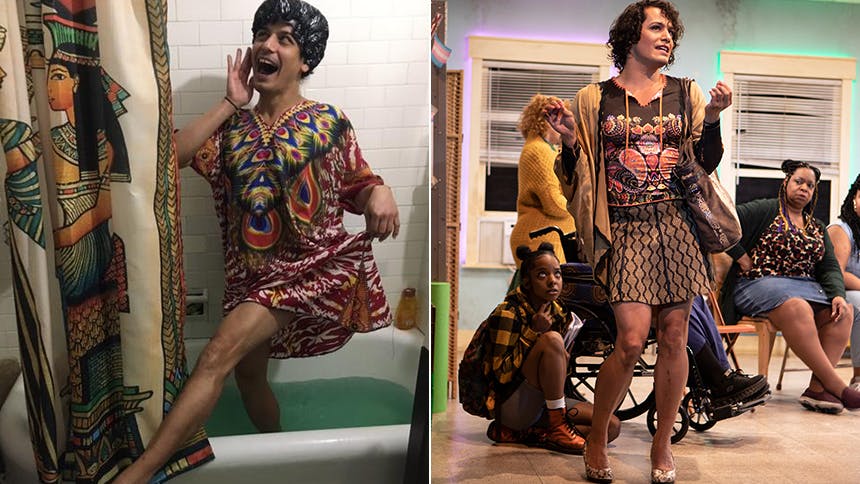 . The Jeff Award winner makes their off-Broadway debut with the Atlantic Theater Company production, running through January 5. BroadwayBox caught up with Esteban to discuss the play, their work with Stephen Adly Guirgis, and how they prepare for the emotionally journey of Venus each night.


1. This is your off-Broadway debut. How did this happen for you?
When I found out I won TCG’s Fox Acting Fellowship, I asked if they knew Stephen and if they would mind introducing us. They publish his plays and were very enthusiastic to oblige. Stephen and I met for dinner at 5 Napkin and he invited back out to NY to read in LAB’s Barn Series in January 2018. We’ve been collaborating on this play and another ever since, and I’ve been out to NY several times and joined LAB’s intensive in 2018 and taught my technique; Contemporary Naturalism at Brooklyn College for LAB’s educational intensive this past summer.

2. Does off-Broadway feel somehow different than the award-winning work you’ve been doing in Chicago?
Absolutely! In Chicago, our preview process is much shorter and not much changes. Even with new plays. In other ways, it’s not different at all. The Atlantic, specifically, treats you like royalty—which is how we try and make artists feel in Chicago.  NY, in general, has been very kind to me.

3. How did you begin crafting Venus? What was most important for you to infuse this character with?
Honesty and speaking truthfully were the most important to begin—as it is for all of Stephen’s plays. Then embracing the “uglies” and also bringing myself to Venus. Her story, in many ways, is my story and some things I say as her are things from my life.  Stephen’s process is unique and such a gift to be a part of because he writes upon inspiration. So, in telling some of my truth onstage and with what Venus endures in the play, self-care was paramount. And taking care of and being gentle with my fellow actors.

4. What’s the most striking or influential thing Stephen Adly Guirgis said to you about Venus?
It was striking to find out what really happened to Bella, and the ways in which Venus, as an addict and a person who doesn’t always make the best choices—it was very insightful to know that she ain’t no saint.  “Don’t be precious with her” is probably the most influential thing Stephen told me about her.

5. You have such a tough, emotional arc throughout this show. How do you prepare mentally and emotionally for a performance, and how do you come down or leave it behind after?
Self-care. I practice yoga regularly before the shows, and afterwards I dance out my feelings. Early in the rehearsal process, I requested that post show, Liza (who plays Sarge and is a dear friend and another hero of mine) have a hug to clean the slate. A reminder that we really love each other.

6. What’s it like to be part of a big ensemble piece like this? How does it compare to playing something more intimate like Motherfucker with the Hat?
What a great question!  Both were absolute joys! Cousin Julio felt so much myself and for me that was centered around one relationship—mine with Jackie. HB is very much about the odd wo-man out. And for much of the play, I feel like everyone is against me and so I’m desperately searching for “my people”.  So, Venus’ need definitely feels more desperate—I mean you’ve got pretty much all the women against you and their ringleader wants to kill you.

Still a lot of the conflict is focused on my relationship to Sarge but these conflicts happen in mostly ensemble scenes. Chicago is an ensemble city and most of us (Chicago actors) know how to be support. We know how to be the bass player in a jazz combo. In this play, there are a lot of solos and you have to know when to comp and when to take the stage. Everyone in this cast is a star, so it’s nice to shine among them and twinkle behind them.

7. You went to Puerto Rico after Hurricane Maria. What did that experience teach you? What did you come away with?
Oh wow. Thank you so much for asking about this. I went to volunteer and spent three months repairing roofs after the hurricane, but I did have a selfish intent. I never lived there, my father was born in Las Marias. He raised us to be proud but I never knew why. Within less than a week, I found out. Despite being discounted from the mainland and ill-treated—I’d never met a community of people with a stronger sense of their own human dignity. It was beautiful and inspiring. We might not have much, but our clothes are clean. And the way we take care of each other. If you are Puerto Rican, you got family no matter where you go.

9. How does your history as a ballet dancer influence how you work as a stage performer?
You’ve done your homework! My work as an actor definitely comes from a physical place. Having lived two lives as a dancer and an actor—I never trained as an actor. In my mind, it was something you could or could not do and no class could teach it. Dancing was a real discipline. I like to think that that discipline carries over too. And when you get a note as a dancer, the proper response is “thank you”. I did end up doing the School at Steppenwolf in Chicago and was introduced to Viewpoints by Alexandra Billings. That changed my life. Because all of a sudden I had this VOCABULARY to communicate to other actors how I understood things.  And also, Alex’s spiritual approach to the work reminded me of our ephemeral nature as beings. So, with viewpoints, Meisner, my years doing improv at iO and dance, I developed this technique I call Cobtemporary Naturalism that is my way into Stephen’s plays. I use a lot of repetition, gesture, and shape to find a character.

10. What is one thing you feel passionate about outside of performing?
Kindness. We are in threat of losing our humanity as a species and certain things have pushed aside the virtue of compassion. I feel it is our duty to take care of one another as human beings. Basically, whatever you are doing—if love is its seed, you can do no wrong.  I pray this country can give up on cancel culture and move towards an empathetic one.