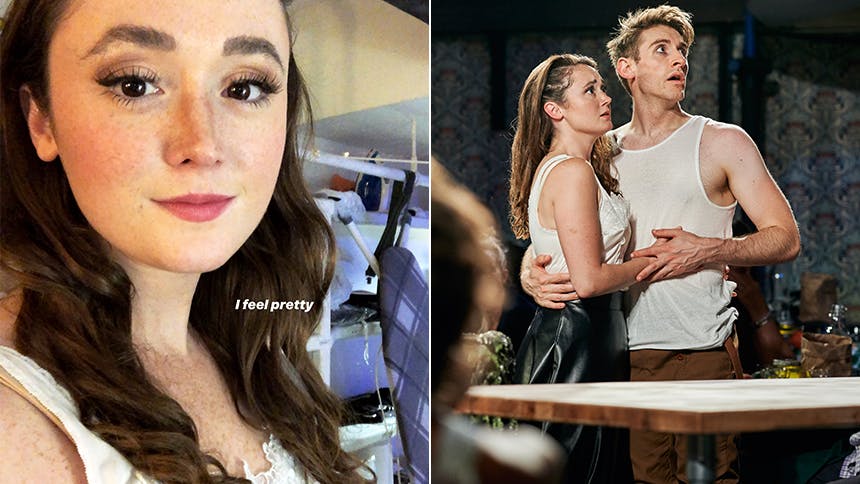 Caroline Amos delivers a breakout performance as Hermia, Snug, & others in Food of Love & Third Rail Projects' immersive off-Broadway production of Midsummer: A Banquet. This wildly-creative, must-see Midsummer combines all the joy and romance of Shakespeare’s classic comedy with multiple tasting courses served throughout the show. The whole evening comes together to create a truly magical and memorable experience, in large part due to the leading performance of Caroline Amos. She's magnetic and her delivery of Shakespeare feels so distinct and so accessible.


BroadwayBox caught up with Caroline to discuss how she approaches Shakespeare performance, her unique and wonderful experience with Hermia, and making connections with strangers throughout NYC.

1. What was the biggest thing you wanted to bring to your Hermia in this production?
She’s one of my favorites! This is my fourth time playing Hermia, so my priority is keeping it fresh and present. I try to bring as much of myself to her as possible because I identify with her so much—she’s sharp, passionate, impulsive, and fights for what she wants. She’s got a little bit of a temper, but not without reason. And she’s been a total joy to play with over the past ten years—I get to see her change with me, which is a uniquely weird and wonderful experience.

2. How did you create Snug for this production? How did you find that character?
I think I tried out a voice during callbacks? And on day one of rehearsal, the director (Zach Morris) was like, “Do that! Do what you did at callbacks!” When they handed me the glasses, the rest just made sense. I wanted there to be a stark contrast between a fierce, outspoken Hermia and a quiet, timid, sweet Snug.

3. Your performance of Shakespeare feels so singular and fresh. How do you approach these characters? What’s your process?
Thank you! I’m a firm believer in the text. I start there and spend a little too much time on it probably, but it makes the transition onto feet easier. Shakespeare has done most of the work for us, so I try to use his words and sounds to influence the physical life I can bring to a play. When I’m connected to the text I find it easier to act on impulse too.

4. Which of Shakespeare’s traditionally male roles are on your bucket list?
Prince Hal is top of my list right now. I’m identifying with him a lot lately—coming to terms with my leadership capabilities, wanting to make changes within myself, the conflict of honoring who you were before and the person you are meant to become. As a queer woman, I find the male lovers super appealing too: Romeo, Lysander, Orlando—it’s necessary for women to start playing these roles more often.

5. Which job do you feel taught you the most? What did you learn?
This is a great question. I spent five summers at the Great River Shakespeare Festival, starting as an apprentice in 2014 and eventually becoming a company member from 2015-2018. The people there were so gracious and patient with me, and every summer was an exercise in humility. Sometimes I succeeded, sometimes I didn’t. I learned how important it is to surround yourself with people with virtues you want to emulate.

6. What’s one thing you are passionate about outside performing?
I just celebrated my one year anniversary with New York City so I’m passionate about exploring this city! There’s so much to celebrate about this place! Food! Art! Architecture! History! People!

7. Tell us a memorable audition story.
One time I walked into an audition and got in a great conversation with the casting director for 10 minutes and walked out ,and later realized I never performed my monologue. Still got a callback though!

8. Which movie do you love so much you know every word?
School of Rock! And Pirates of the Caribbean (the first one)!

9. Who inspires you most as an artist?
If I could grow up and be a combination of Judi Dench and Julia Louis-Dreyfus, I’d be thrilled. Both of them command text in vastly different ways and I admire them immensely for it.

10.  On your website, it says that you enjoy talking to strangers. What was the last great interaction you had with a stranger?
I’ve had a lot of good ones recently. I held hands with a crying woman on the subway the other day and neither of us exchanged a word, but she smiled at me when she got off the train. I shared a black and white cookie with a man at the bus stop a couple weeks ago. This weekend, I was literally late to my places call in Midsummer because I was talking to an audience member about how she was an English teacher, and how she just directed the play, and she had some fascinating things to say about it. I think people are so cool and I love them.

Hurry to Café Fae in Union Square before September 7 to experience Caroline Amos in the fantastic Midsummer: A Banquet.

Midsummer: A Banquet
New
Best Priced Tickets
Newer
#BoysDanceToo: The Guys of Dancing Through My Resume
Older
Exclusive Clip from You Are Here: The People of Gander React to First Hearing About Come From Away