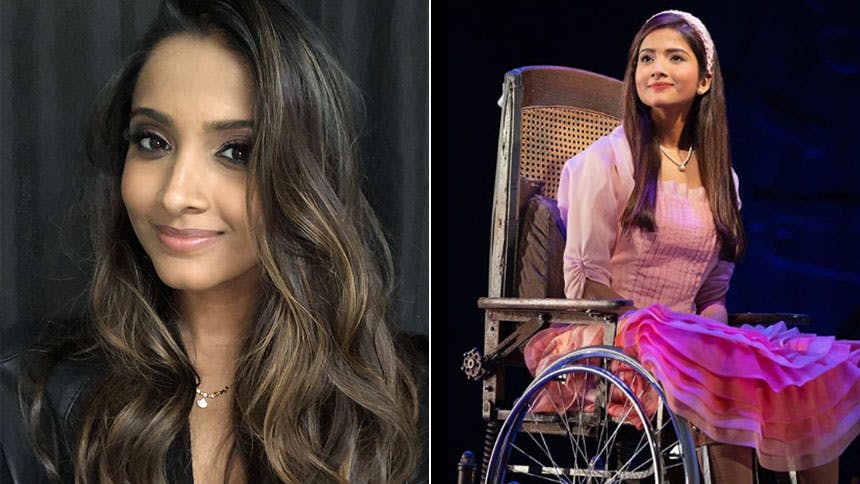 Shoba Narayan makes history in Oz as the first South-Asian American to play the role of Nessarose, aka the Wicked Witch of the East, in the Broadway blockbuster Wicked

. The gifted singer and actress made her B'way debut understudying the lead role of Natasha in Natasha, Pierre, and the Great Comet of 1812 before touring the nation as Eliza in Hamilton and appearing on TV’s Quantico. BroadwayBox gets to know Shoba a bit better below as she talks Idina love, Great Comet fans, Hamilton mishaps, and the joy of going on Nessarose's first date every night.

1. Do you remember the first time you listened to Wicked? What role did the musical play in your younger years?
Of course! I was introduced to Wicked in 2003 by one of my ballet-school friends who was more in the “Broadway know” at the time. On one of our playdates, she played me the cast recording, and I fell in love with it. Up until that point, most of what I’d listen to in the musical theater genre was in the world of Rodgers and Hammerstein and Irving Berlin. So hearing contemporary/pop music on the Wicked cast recording expanded my scope and excitement about the artform. I remember being so mesmerized by the power of Idina’s voice. The message and power of “Defying Gravity” shook me to my core. She soon became an icon of everything I wanted and aspired to be.

2. What does it mean for you to make history in a show that’s been running on Broadway for 15+ years?
Wicked was way ahead of its time and made its mark on Broadway as a show about strong female leads and their friendship. I am not only honored to be part of its legacy, but also because of the creative team’s decision to open up these beautiful roles to minority actors. I hope this inspires others who feel underrepresented to follow their Broadway dreams.

3. What is the biggest challenge in playing Nessa (other than the wheelchair on a rake stage)? What do you love most about it so far?
Getting to channel the deeper essence of Nessa is one of the most amazing parts of my experience so far. Nessa is one of the most misunderstood characters in Wicked. No question she has her rough edges (shrinking Munchkin hearts is never going to win a ton of praise) but it is easy for the audience to forget the life she's faced (being disabled / her sister’s abandonment after waging a war with Oz / seeking love). Now, of course, I don't agree with all her methods, but I think there is a deeper side to Nessa. Who knows what she might have become had a house not fallen on her? Channeling that tragic beauty every day is really fun.

4. When you look back on your Broadway debut in The Great Comet, what is the memory you cherish most?
The Great Comet brought so many wonderful things: my Broadway debut, a performance on the Tonys, and an overall amazing experience with musical talents like Rachel Chavkin and Dave Malloy. I think the most unexpected and cherishable moments were with the fans.

It was the young minority women who came to see me play Natasha and who through words, letters, and art, shared how much the performance meant to them. Saying things like, “not only did I see myself on stage, but for the first time I saw myself as someone who could be desired and powerful.’ This was deep for me and is why I got into this business. I grew up without seeing someone like me star on Broadway. The fact that I was able to do that for others, for even a moment, makes it all worth it.

5. What was your biggest onstage mishap from your time touring with Hamilton?
One night in “Quiet Uptown,” during a moment when the floor of the stage is supposed to be still, the turntable kept turning at a pretty high velocity. My Hamilton (Joseph Morales) and I had to do the whole emotional reconciliation on what felt like a treadmill, without bursting into a fit of laughter. It was a good lesson in staying collected while the ground beneath you is moving...literally!

6. What was a tougher sing for you, “Burn” or “No One Else”?
Both are super challenging, but if I had to choose, it would be “No One Else”. I think Dave Malloy wrote one of the most technically challenging arias out there! It takes an incredible amount of vocal control to navigate tricky interval jumps to different vocal registers.

7. Tell us a memorable audition story.
Oh man, tough to keep count. I remember when I had my final callback for Gossip Girl. It was to play a high school queen bee, someone who was a well- put -together perfectionist. You know, one of those people that don't make mistakes. Channeling this inner character, I strolled into the room, confidence at 110%, looking directly at the creatives.

Of course, my confidence led to me not looking at the floor. I tripped on a camera cord and face-planted onto the floor—pretty much the opposite of a graceful, perfectionist. Everyone was super quiet. I got up, let out a massive laugh and fortunately the group was with me on this. I did the audition a bit more relaxed than high strung. And believe it or not I booked the gig. It always serves as a reminder not to take yourself too seriously... and to look at the floor when walking into a room.

8. You have a stunning voice. Who is the voice you grew up idolizing?
Thank you!! I’ve always loved listening to singers who were able to skillfully bridge the gap between classical or “legit” singing and belting—singers who could do the “big sing” roles. I grew up listening to Idina Menzel, Lea Salonga, Sutton Foster, Sierra Boggess, Judy Garland...and Beyonce :)

9. For those who are unfamiliar with the art of Bharatanatyam, what is one YouTube video you love that we should watch as an introduction, and why?
For those who are unfamiliar, Bharathanatyam is a classical Indian dance style that originated in the temples of India over 2000 years ago. It can be thought of as the “classical ballet” of India. The artform can be thought of in two main parts: there’s the story-telling element, and there’s the “pure dance” element that doesn’t have any particular meaning other than the physical embodiment of rhythm and melody.

This video is an excerpt of a piece that will acquaint you with both of these aspects. You’ll see the “pure dance,” specifically a rhythmic sequence of steps that escalates into 3 speeds. About 2 minutes in, you’ll start seeing me communicate a story through hand gestures (called mudras) and facial expression (called abhinaya).


10. Wicked is known for these huge theatrical moments. What’s your favorite small moment you have in the show?
Lately, I’ve been loving a moment I have in the Ozdust Ballroom scene with my Boq. Boq (Riley Costello) and I play “pretend first date” before he wheels me out for our scene. We crack silly jokes and make each other laugh... It’s a sweet moment that perfectly describes two young wide-eyed kids at a party.

Head to Broadway's Gershwin Theatre to see Shoba Narayan as Nessarose in 'Wicked'.

Wicked
Best Priced Tickets
Newer
Spend a Two-Show Day of the Hit Off-Broadway Musical Sing Street with Skyler Volpe
Older
Six Spring 2020 Shows We’re Crazy Excited to See (And You Should Be Too!)