Michael Benjamin Washington Talks Fires in the Mirror, Working with Anna Deavere Smith, and Filming Netflix's Boys in the Band 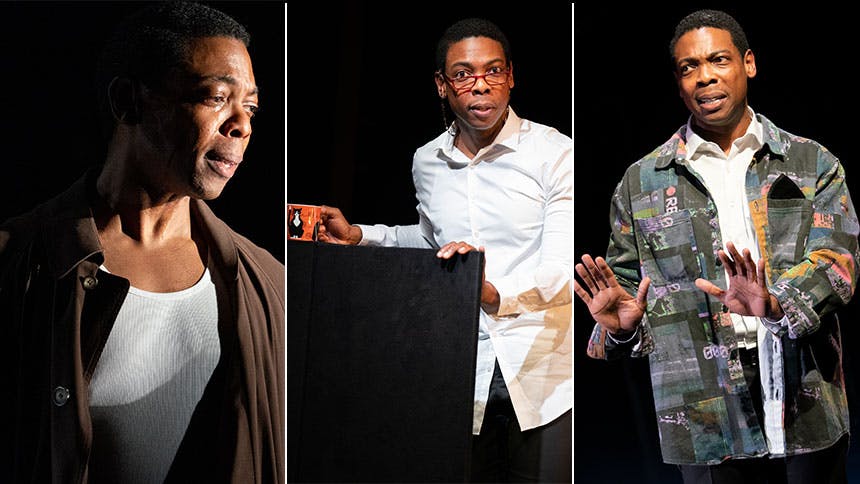 Michael Benjamin Washington gives one of the most incredible performances of the year starring in Anna Deavere Smith's one-person play about the 1991 Crown Heights riots and the relationship between the black and Jewish communities living there, Fires in the Mirror

. The revival runs at Signature Theatre Center through December 22, so hurry to see him. BroadwayBox recently caught up with Michael Benjamin Washington to discuss playing 25 characters, The Boys in the Band movie, and advice from Anna Deavere Smith.


How did this incredible, herculean opportunity happen for you?
Many thanks to David Caparelliotis, the casting director of Boys and Fires, who has kept me on his short list for years! I’m proud to say, “I came from Casting!” I was filming the Netflix feature of The Boys in the Band in Los Angeles and my agent, David Kalodner, informed me there was interest for the revival of Fires, and as a long time Anna Deavere Smith fan, I was thrilled, but was very focused on staying in the world of Joe Mantello’s 1968 screen adaptation. I put myself on tape (in my trailer), sent it off and heard 15 hours later that the tape was very well received and if I could get to New York, as soon as possible, Signature Theatre would pay for it. I hopped on a flight on my next day off, learned four new monologues on the way, auditioned for Anna and the team, hopped back on a flight and resumed filming the next day.


After being cast in this piece, where did you begin your process? What kind of research did you do for this performance?
I watched the PBS Great Performances production once, to get an idea of Anna’s take on the characters. Because this was a journalistic/linguistic study, it was very helpful to hear the intentions of the characters she interviewed, as I was not given the tape recordings to study. Anna wanted to see if the piece could exist as a legitimate play on the black male body. I approached the text as I would any other play I was cast in. What do you want? From whom? What’s in the way? How are you going to get it? What is the physical, vocal and emotional life of each person? How does each laugh? Cry?

The director and I went on a field trip to Crown Heights to walk around and check out the neighborhood and that gave some lovely context to how things have shifted, positively, since 1991. Other than that, three weeks of rehearsals, no television/cable or internet in my new apartment, and I read the play, everyday, twice a day, until two weeks after we opened. I’ve lived like a monk for this show and it’s been well worth it.


Which of these 25 characters or monologues took the most time for you to master? How did you eventually crack it?
Angela Davis was the monologue Anna asked me to cold read in my callback and proved to be the most difficult. She goes on a rollercoaster exploring huge themes and ideas, from feminism to lynchings to Clarence Thomas and Anita Hill during her four to five pages. It takes a lot of patience to unravel, still. Anna kept questioning the sense of the front part of the monologue and a week before opening, sent me the original text which had been poorly paraphrased in translations, over time. Once we reinstated that, it started falling out of my mouth like butter. She’s a brilliant woman. Angela and Anna, both!

What was the most important thing Anna Deavere Smith said or shared with you that influenced your performance?
She prepared me for the inevitable fatigue that comes with doing this kind of work and volunteered three great videos, digitally, to me. One was of a professional surfer expertly riding big and small waves in a contest; one was of the great Judith Jamison dancing Alvin Aliey’s Cry (the creation of which I’ve been writing a play with dance about for two years); and the other was a piece of classical music that has a steady insistence and mastery of technique that has been the underscoring for my half hour preparation. All of these videos are about stamina and handling moments and events with grace. The best piece of advice was: “Remember, opera singers don’t sing everyday and you’re singing a one-man opera. Learn to pace yourself”. I’m from the “...leave it all on the floor” school of performance, but that mantra will leave your battered, broken body on the floor. I’ve learned to pace it.


Is it tough to leave this piece behind at the door each night? How do you come down after a performance?
Excellent question. YES! Leaving these characters behind is impossible. I feel like a wrangler who’s been assigned them for the duration of the run. I don’t drink or go out after a show. I sleep or rest ALL THE TIME. Boys in the Band taught me how to take off an emotional or painful character, but they all jump into my bag or coat pocket when I head home. Sometimes they visit me at 3 AM or in the shower. I’ve learned to not be scared of them, but I do love them more the next day when they let me sleep!


Tell me about your favorite day filming The Boys in the Band for Netflix.
As I was learning monologues for my audition and callback for Fires, we were actively shooting. Luckily, we filmed in sequence, so the first half of shooting was all fun and party mode. I flew out to New York on Saturday morning, had my callback Sunday at noon and got back on a plane that night, heading to Los Angeles. Monday morning, we were scheduled to film my character’s “phone call” (if you know the show). Joe Mantello and ALL the boys handled me with the sweetest, kindest, most gentle gloves because they knew what I just did that weekend and what I was required to do that day. They tried so hard not to ask “how’d it go”; “how’d you do”, and I could feel the most positive vibes and pure love from each of them because they wanted this job for me more than I wanted it for myself. The next day, when I got the official offer, Jim Parsons was the first one I told and his eyes beamed in a way I’ll never forget. “You deserve this, Michael. I hope you know that.” It was the most magnificent 72 hours of 2019!


Don't miss Michael Benjamin Washington in Fires in the Mirror at Signature Theatre through Sunday, December 22.

Newer
Rachel Prather Takes On Seven Questions About A Christmas Carol, Holiday Traditions, and Why Scrooge's Sister Is the Ghost of Christmas Yet to Come
Older
Five Burning Questions with Tootsie Tony Award Winner Santino Fontana