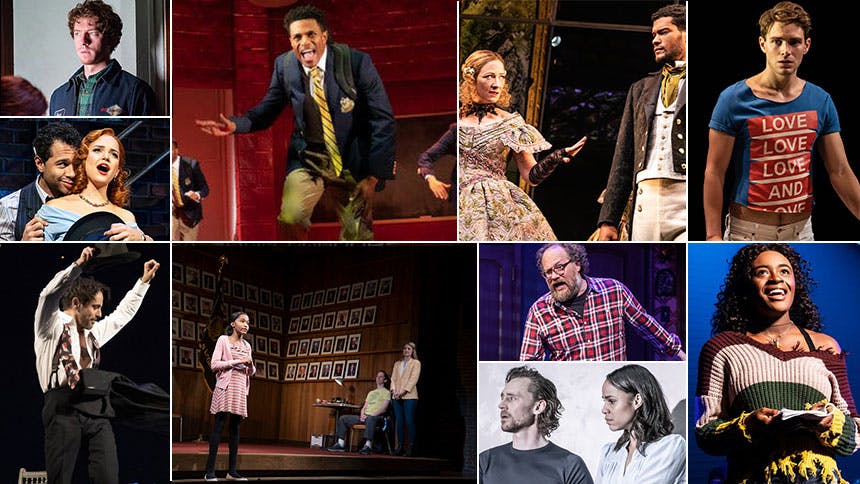 These 10 actors gave sensational Broadway debuts this year. Let's give it up for the first-timers (presented alphabetically)!

Everyone in the acclaimed Broadway transfer of Betrayal made their debuts with the show, and all were fantastic. But when we think back to the play, it’s Ashton and Hiddleston expertly performed scene in the Italian hotel room that stands out most. Hiddleston’s silent mastery of the subtext paired with Ashton’s emotionally-gutted confession was nothing short of brilliant.

Andrew Burnap has the toughest job in the new Broadway drama The Inheritance. By all means, the narcissistic and damaged playwright Toby Darling is not a likable guy, but in order for the nearly seven-hour epic to work, audiences have to care for Toby, his past, and his future, and Andrew Burnap’s performance makes that happen. You see how he charms even as he destroys those around him. You root for him despite knowing his fate is sealed. His “heal or burn” monologue is piercing. It’s by far one of the most memorable debuts of the year.


The Scottish actor made his debut playing the lovable Italian suitor to Marisa Tomei’s Serafina Delle Rose. Together they were rom-com perfection, in large part thanks to Emun’s funny, heartfelt performance.


Celia Rose Gooding has a hard job over at Jagged Little Pill; the world is falling apart around her but you have to root for her Frankie to come through it all. She rides Diablo Cody’s book like a wave, hitting all the highs and lows but never getting taken under the weight of it.

Andy received a Tony Award nomination this year for his debut performance as the best friend and roommate in Tootsie. His delivery and comic timing makes Robert Horn’s Tony-winning book feel like your favorite sitcom. Every moment he’s onstage, you know you’re going to laugh—and how often does a performer manage that?

Will Hochman (Christopher Dunn in The Sound Inside)


Imagine making your Broadway debut in a two-hander, opposite Tony and Emmy Award-winning ace, Mary-Louise Parker? Then, imagine she’s doing some of her best work onstage, and you’re keeping up right alongside her as an equal. That’s Will Hochman in The Sound Inside. His skilled performance is so based in reality and truth, that you feel this person exists. It’s a true treat to watch him and MLP hit that ball back and forth for 90 thrilling minutes.

Slave Play is brilliant, but it’s not easy to sit through emotionally; thankfully, Sullivan Jones and Annie McNamara are there to provide laughter in the show’s toughest moments. Their paired performance as Phillip and Alana is a joy to watch unfold each and every time-they are the Jack and Karen to the other pairs’ Will & Grace. Their sex scene in Act I offers audiences the first opportunity to really let loose and laugh with the show. Then in the therapy scenes, Sullivan’s Phillip shines and anytime your eye catches Annie’s Alana there’s something hilarious and real happening. What a truly dynamic duo.


What is there to say about Jeremy Pope? In 2019, he made his Broadway debut in the drama Choir Boy and then jumped right into the new musical, Ain’t Too Proud, securing Tony Award nominations for each performance. He showed Tony Award viewers his range, and his year, that night with performances from both shows—each wildly different. His performance as Pharus will long be remembered by audience members lucky enough to have seen it. It was electrifying in every way. That face and talent have called him to the screen for a bit now, but we can’t wait to see what project brings him back to the stage next.


Stephanie Styles made her highly-anticipated Broadway debut in a role that showcased her thriple-threat talents. She danced Warren Carlyle’s choreography with ease; she made theatre nerds’ hearts happy when she belted that “Always True to You (in My Fashion)”; and she had real old-fashion Broadway star quality.

The Company of What The Constitution Means To Me


There’s no picking just one person from this play. Heidi Schreck gave one of the most organic performances I’ve seen. It was so conversational and real that I was actually surprised she cried in the same places every night because it didn’t feel like an actor’s performance in that sense. Mike Iveson brought heart to the piece and an entirely different perspective. Then introducing the two brilliant and passionate young women, Thursday Williams and Rosdely Ciprian, was the icing on the cake. In the fierce debate and the quiet Q&A after, Thursday and Rosdely brought such emergency to the proceedings—reminding us that this isn’t just Heidi’s story, it’s every American girl and woman’s.