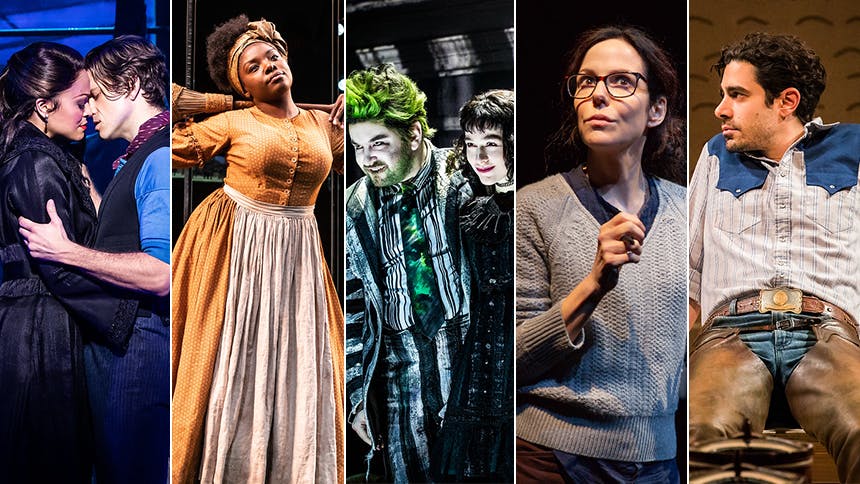 
The Charles Dickens classic got a fresh, moving new spin on Broadway thanks to Tony Award-winning director Matthew Warchus (the man behind Matilda) and Cursed Child’s Jack Thorne. The production was inventively staged, and I don’t know anyone who saw it without crying at some point.


One of the most memorable Broadway shows of 2019 was the musical adaptation of Tim Burton’s Beetlejuice. The design was next level (David Korins’ sets, William Ivey Long’s costumes, & Michael Curry’s puppets), the performances were fantastic, and their story was by far the most memorable of the year. The show struggled a bit after opening, received a Best Musical Tony Award nomination (along with seven others), turned it out on the Tony telecast and found a huge fan base online thanks to that performance, the cast album, and the app TikTok. As the year came to a close, Beetejuice was all the buzz on Broadway when the show announced it was being vacated from the Winter Garden Theatre in June 2020. Here’s to hoping the fan-favorite finds another home to haunt in the new year.


Adam Rapp’s mysterious two-hander was a 90-minute thrill ride for audiences. Anchored by two incredible performances by stars Mary-Louise Parker and Will Hochman, the drama about a dying Yale writing professor and her brilliant student was one of those shows that reminded New Yorkers why they go to the theatre and why new work matters.


This combo of two incredible monologues was one of the most special nights in the theatre. Tony nominee Tom Sturridge began with his hyper-realistic and heartbreaking performance of Simon Stephens’ monologue “Sea Wall”, about a young father who loses his child. Then Oscar nominee Jake Gyllenhaal came in and delivered a gut-wrenching yet wildly funny performance in Nick Payne’s monologue “A Life”, about a new father who loses his dad. It was a magical night for anyone who has been a father or a son or has experienced the profound grief that comes with loss.


Matthew Lopez’s two-part, Olivier Award-winning epic about a group of gay men living in present-day New York is already a benchmark in LGBT culture—much like its predecessor Angels in America. It captured the challenges and joys of modern gay relationships, the lasting effect of the AIDs epidemic, and life in America during the Trump administration.


This year’s Tony Award-winning Best Musical was a true work of art thanks to Tony-winning director Rachel Chavkin and her stunning creative team. The Anaïs Mitchell musical weaved together two mythical legends and gave the proceedings a cool New Orleans flair. For years to come people will remember the lights coming into the audience during “Wait for Me”, Eva Noblezada belting in the “Wait For Me (Reprise)”, and André De Shields as the ultimate master of ceremonies.


Alex Timbers’ stage adaptation of the Baz Luhrmann movie musical was everything fans have wanted in the years since the film first debuted. The 70 pop songs performed by the unbelievably talented company kept the party going and the energy up, and the design was probably the best right now on Broadway. It’s more than musical, Moulin Rouge is an event.


Jeremy O. Harris’ debut Broadway play was nothing short of brilliant. It’s better to see it not knowing too much going in, but Slave Play was an uncomfortable, in-your-face examination of the sexual power dynamics between black and white people in America throughout our shared history. You won’t see another play like it. There’s no way to see this and not have an opinion about what you saw. You feel, you examine, you look inward—it’s what theatre is able to do at its best.

2. What the Constitution Means to Me


Heidi Schreck’s Tony and Pulitzer-nominated play about the American constitution, who it is designed to protect, and how the rest of us fit into it was so incredibly special. It should be shown in schools and universities and aired once a year on television, like The Wizard of Oz. Heidi’s Tony-nominated performance was astonishing and her political points were sharp, immediate, and relatable. It was a superb piece of theatre.


This reinvention of Rodgers and Hammerstein’s Oklahoma! was one of the most daring and rewarding theatrical experiences of the decade. It was the finest acted book musical I’ve seen in memory, the orchestrations were genius, and the vision unparalleled. After seeing it, I felt I had never really seen Oklahoma! before this production, and each time back at the Circle in the Square theatre provided another rich layer. Hopefully, this production inspires a revolution in the musical revival.

Slave Play
Discount up to $30