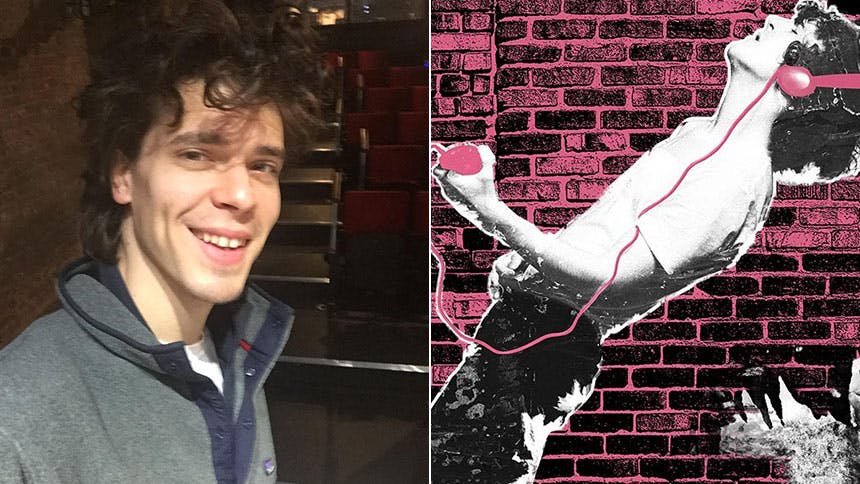 . Living in 1982 Dublin, Brendan is a bright young man in his early 20s who loves music and his little brother but whose depression and addiction keep him from leaving the family house. Based on John Carney’s 2016 film, Sing Street features a book by Once Tony Award winner Enda Walsh, a score by Carney & Gary Clark, and direction by Tony winner Rebecca Taichman and runs through January 26.


BroadwayBox caught up with Gus (who received a Lortel nomination for his New York stage debut in 2016's Ride the Cyclone and has gone on to appear on TV's Jett, Dickinson, Power and Law & Order True Crime: The Menendez Murders, as well as the film Goat) to discuss Sing Street, his screen projects, and why he stays off social media.

1. Since Ride the Cyclone, your screen career has taken off. What was it about Sing Street that made you want to return to the stage with this project?
It was the sibling relationship that really moved me. I have an older brother, and when I read the script I just cried and cried. Also, film and TV is fun, but there’s nothing quite as exhilarating as live theater.

2. When crafting the character of Brendan, what was most important to you? What did you hope audiences came away with from his arc?
The gravity of his mental condition. It’s easy to dismiss the fact that he doesn’t go outside as just a plot point. But I think he’s grappling with some serious mental illness. And that’s important, because it makes him so much more generous that he’s able to push through in order to lift his little brother up. Luckily that story was helped by the beautiful staging and design.

3. What was the most illuminating thing that Enda, John, or Rebecca offered you during the process of creating Sing Street?
That there’s no limit to the complexity that this story and these characters can hold.

4. This is set in 1982 Ireland. What do you think happens to Brendan in the 35+ years after?
God, what a question. I saw a guy on the train who struck me as the pessimistic answer to that question. Hunched over, scraggly hair, high as a kite, emotional support dog, clearly very sick but soldiering on. I don’t know though. I like to think that Brendan would be off in London, managing his little brothers booming music career. Call me an optimist.

5. Looking back, what was the highlight of your experience with Ride the Cyclone?
Our first preview was the day after Trump was elected, and for whatever reason the New York theater-going audience was really in the mood to watch a dark comedy about a bunch of dead kids that night. It was a pretty great show honestly.

6. Growing up in New York, do you remember the first play or musical you saw that really rocked your world?
The Lion King. That’s the first one that I remember being totally floored by... I have to give a shout out to The Normal Heart though. It was far from the first play I ever saw, but it’s easily the most electric theater experience I’ve had to this day. I saw it twice, the second time on gay pride day just a few days after gay marriage was legalized. I can’t describe the level of collective catharsis in the audience. Theater at its best.

7. What was your experience like shooting Law & Order True Crime: The Menendez Murders? Was it emotionally exhausting to dig into the role of Erik day after day?
Totally, one hundred percent, mind-bendingly emotionally exhausting. But luckily, we had a really great cast and crew, so we had as much fun as we possibly could given the circumstances.

8. Tell us a memorable audition story.
I once had to do an audition where no one read the scene with me. I just said all of my lines to the camera and then left. I don’t think I’ll ever forget that.

9. Which movie do you think you’ve seen the most in your lifetime? What speaks to you about it?
It’s such a lame answer, but probably Wedding Crashers. I just found that movie so unbelievably hilarious when it came out. I still do. Their screen chemistry and Christopher Walken. It’s got everything. I should have lied and said something cool like Raging Bull. But I’m laying it all bare. This is the real me.

10. What influenced your decision to stay off Instagram/social media? Is it tough at times?
I don’t interact healthily with that stuff. If I had social media, I would be on it all the time. I can just tell. It would make me obsessive and anxious. Some people seem to be able to fold it into their lives nicely. Not me. It’s actually very easy to stay off it if you’ve never started.