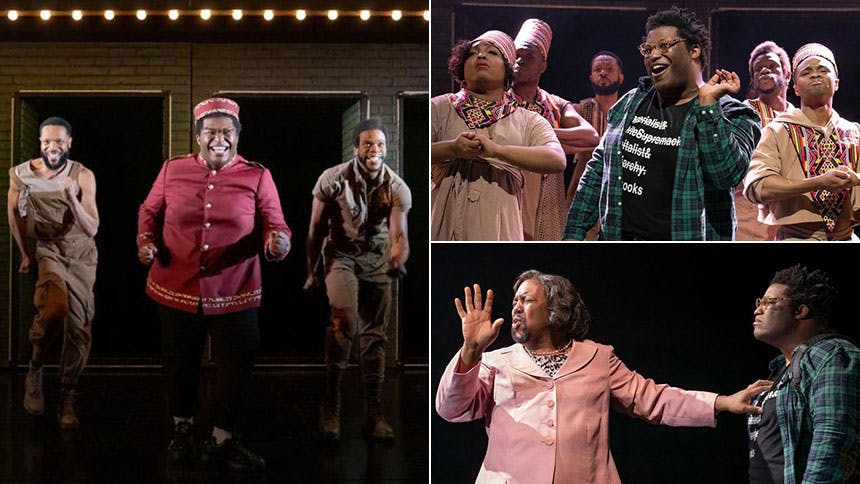 Larry Owens gives a breakout starring performance as Usher, a struggling musical theatre composer by day and a Disney usher by night, in the critically-acclaimed, must-see new off-Broadway musical A Strange Loop

. Written by Michael R. Jackson and produced by Playwrights Horizons in association with Page 73, A Strange Loop explores the black gay experience and how it relates to family, religion, sex, self-loathing, and the white gaze. The world premiere musical runs off-Broadway at Playwrights through July 28.


BroadwayBox caught up with Larry to discuss the hit musical, how his training at Steppenwolf prepared him for this epic journey, and playing the role of a lifetime at the beginning of his career.

1. You barely leave the stage in A Strange Loop. How do you find the stamina to go on this physically and emotionally exhausting journey without an intermission? What is your pre-show like—how do you get to where you have to be each performance?
I have to credit the training I received at the School at Steppenwolf in Chicago. Tarell Alvin McCraney, Amy Morton, K. Todd Freeman were amongst my teachers, and each has a living, breathing body of work that requires the rigor and stamina that I put over. I feel like they gave me everything I ever could need for each and every part of this process: from reading the script, developing the role, rehearsing and building the production, and playing it every night in a repeatable way that is bred completely of the moment. The only religious part of my process is my vocal warm up. Some of the lessons from Steppenwolf are intentionally crude and visceral—in an effort to show how low and real acting is—and one phrase I take to heart here is, “don’t blow your wad.” I try to spend as much of my day not thinking about Usher, so that when I show up at the stage, I’m able to be immersed anew in Michael’s text and the brilliance of my scene partners L Morgan Lee, James Jackson Jr., John-Michael Lyles, John-Andrew Morrison, Jason Veasey and Antwayn Hopper, and the songs!

2. What’s the most important or striking thing Michael R. Jackson has said to you about Usher and his journey?
It’s something he says in the press which is that the show is self-referential and not autobiographical. In older drafts, the character of Usher dissolved into a character that was ultimately called Michael; but that doesn’t exist anymore. The character I play now is a character named Usher who is writing a musical, not Michael actually writing A Strange Loop. Which gives me tremendous freedom in crafting a character that doesn’t have to be a facsimile of Michael R. Jackson. There are parts of Michael and parts of Larry but it all adds up to being a perception of Usher.

3. What does it mean for you to be a part of A Strange Loop and share this story that musical theatre audiences have really never seen before?
Ask me in a few months! I’m overwhelmed by the beauty and power of this physical production—rendered with precision and care by the entire creative team, including set designer Arnulfo Maldonado, lighting designer Jen Schreiver, and costume designer Montana Levi Blanco. Watching people who overlooked Michael’s script now crying in the theatre is a retribution that tastes so sweet. Playing a protagonist in an original musical for the American theatre is a dream of mine that is now realized! It’s the role of a lifetime and it’s just the beginning of my career. That’s kind of scary!

4. Your podcast, What Makes U Sing, explores the music that made your guests’ lives. Who is the musical artist that has made your life? What did you latch onto about their music or lyrics?
I’m a Playwrights Horizons baby through and through. The musicals produced here marry my need for sophisticated storytelling with sublimely constructed music. William Finn is the tentpole of how I approach musical storytelling. The chords he uses and his specificity of character in lyric feels like a direct link to Michael’s work. As an alum of Stagedoor Manor, Stephen Sondheim is Bible. The rate of thought and the hyper intelligence of his lyric writing—and the rigor of performing work done by a master of the form—also made me drawn to the material I get to perform every night…onstage at Playwrights. Mary Testa is my patron saint. Aesthetically, I’m a human amalgam of March of the Falsettos, Sunday in the Park With George, and Bubbly Black Girl Sheds Her Chameleon Skin.

5. You’re a comedian and a writer as well as an actor. How does your skill set as a comedian help you navigate the tougher moments of A Strange Loop? Do you think your history with stand-up helps you maintain your seemingly personal relationship with the audience here as Usher?
My debut year in comedy was last year. In a short time, I went from singing songs from musicals accompanied by slideshows to writing my own musical material—songs that exposed the pain of living in my body but that, in their honesty, made the audience laugh. Repurposing pain for liberation, or illumination, is also the heart of Usher’s journey. Using the comedy stage to unpack the death of my sister or my isolation as a fat black gay man with dignity was incredibly formative for me as a performer and human! My relationship with the audience in A Strange Loop is completely different than in comedy. Audience reaction, for me, in comedy, has to be immediate...and boisterous. If the audience isn’t behaving like they're having the best night of their lives, I feel like I’m failing. In the theatre, I have to trust Michael’s script and wait one hundred and five minutes to know what they’re thinking. Luckily, it overwhelmingly turns out to be positive.

Don't dare miss your chance to see Larry Owens performance in 'A Strange Loop' at Playwrights Horizons through July 28.