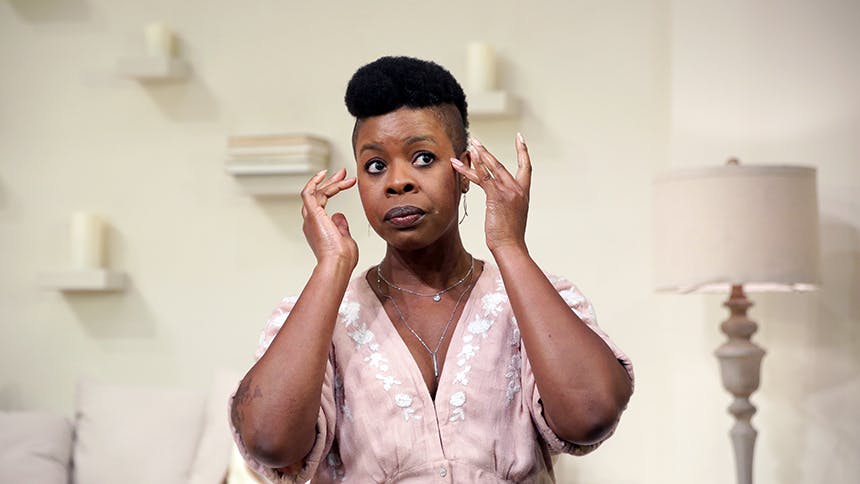 is a testament to her vast talents. Soho Rep's acclaimed production has been remounted for the summer at the stunning Polonsky Shakespeare Center, Theatre for a New Audience's home in Brooklyn, and to miss this theatrical event would be a crime. There's truly nothing else quite like it, but to explain too much about the play would ruin the experience of seeing it.


BroadwayBox caught up with Roslyn Ruff to discuss building her character, why the piece resonates with her and with audiences, and why she's reluctant to give too much away about Fairview.

1. You’ve been a part of Fairview since its inception, and director Sarah Benson credits you with helping to shape the work and the character. Can you expand on that and share with us specifically how that collaboration worked? What was most important for you to see on the stage or have included/represented in the piece?
My cast mate Hannah Cabell and I were a part of the last workshop prior to production in the fall of 2017. They hired actors for two weeks to read and get up on our feet and do scene work, so Jackie and Sarah Benson, our director, could figure some things out. I honestly leaned heavily on what Jackie wrote. In terms of the character, Jasmine was right there on the page. All I had to do was say the words. There's a distinct and specific rhythm there. I just followed it and there she was. The workshop process was great for me because, due to the experimental nature of the piece, I had no real attachment to anything. I didn't really know what was going on! So, nothing was precious. No stakes. It was easy and fun because the character was different from what I usually get asked to play and that was refreshing. I've mostly played serious characters and as a result people question if I can be funny/play comedy, or decide for me that I can't. Opportunity is powerful. Opportunity is everything.

That carried over to the rehearsal process for the actual production. I clung to the character and tried to surrender to the rest until the big picture became clear. It was challenging because every day was an experiment of figuring how the show worked. I just tried to be as open, free and honest as possible. I'm not musical at all but I definitely look at plays like a piece of music. I listen and try to find and play the notes that seem to fit. It was most important to me that Jackie and Sarah's vision be realized on stage.

2. Did Sarah or Jackie Sibblies Drury give the cast any specific pop cultural references or touchstones to study when piecing together Fairview? Were there any you found yourself latching onto when crafting Jasmine?
Yes. We started out with the idea of referencing African American sitcoms from ‘70s, ‘80s, and ‘90s. Then the conversation became more focused on the ‘90s and ultimately the conversation stopped. I think the references put us on the path until our unique world emerged. I watched so much TV growing up and Jasmine is absolutely influenced by much of what I digested. I'm also my own research by virtue of being an artist (of color) constantly dancing between the artist I am, the artist I'm "allowed" to be, and the artist I dream of being. This piece is so special. The layers of resonance are like a hall of mirrors.

3. Without giving away too much of Fairview’s powerful Act III, what do you hear most often from friends and family after they see this show? And what conversations do you hope to have with people—be it friends or Fairview fans—after a performance?
I personally think that no one should be doing interviews for this show. I'm already struggling with my answers. So, you don't have to worry about me giving too much more away.

But the things I hear most post-show generally have to do with the experience as a whole: "I need to process this for a few days," "That was insane," "I need to see it again," "I have so many questions," "I can't believe what I just witnessed," "I didn't understand and then...."  "I didn't understand," "I laughed so hard and then..." & "I'm shook."

I prefer to listen mostly. I'm fascinated by people's reactions—how they interpret the piece as a whole or specific moments. They're all so different.

The most rewarding is I get to go to work and do something that feels so important, special, meaningful. It also feels great to get to express myself and be challenged in a way that's rare for me. This show is so physical. It's a crazy mix of precision and reckless abandon.

5. You have an incredible, OBIE-winning stage resume that ranges from Shakespeare to contemporary, political work. How do you choose projects? What would you like to see more of in terms of roles & jobs for black women in the theatre?
For a long time, when an audition or job presented itself, I'd take it. Now I'm more thoughtful about what I'll go out for. Theatre is so hard. It needs to be worth the toughest of days you may have. I want to have fun, enjoy the people I work with, be inspired, challenged and, most importantly, a bit scared.

Hurry to Theatre for a New Audience in Brooklyn to see Roslyn Ruff in 'Fairview' before August 11.