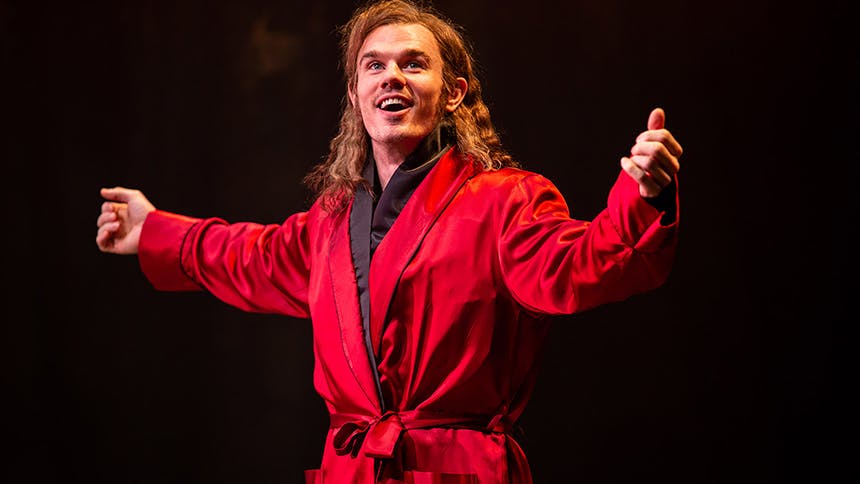 Jay Armstrong Johnson gives a performance that has to be seen in the new off-Broadway musical Scotland, PA

. A twisted take on Shakespeare’s Macbeth set in a fast food chain during the 1970s, the musical is hilarious and dark, and Jay steals every scene he’s in as Banko, the dim-witted stoner with a heart of gold. He’s so endearing, you can’t help but love him, and he’s so hilarious, you can’t take your eyes off him. His big number “Kick Ass Party” needs to be preserved somehow.


BroadwayBox caught up with the former star of On the Town, The Phantom of the Opera, The Mad Ones, and Hands on a Hardbody to discuss his begging to be part of Scotland, PA, Banko's capacity to love, and how growing up gay in Texas helped inform his comedy.

1. How did Banko and Scotland, PA first appear on your radar? How did we get here?
What's funny is that when I first auditioned for Scotland, PA it was for the role of Mac. I knew that Lonny Price was doing a new musical, and I wanted to get back in a room with him because I had such a good time with him working on Sweeney Todd. I essentially begged him for an audition and he had me submit a tape for Mac. I did not put a good tape together for him. I ended up emailing him like, “I just sent you a tape that I am not confident with, just so you know. If you're having in-person, studio auditions any time soon I would love if you saw me for it. Then they ended up having auditions, and [Lonny] asked me to prepare the Mac material but he also asked me to prepare the Banko material. I walked in and I did the Mac material, and it went well—it wasn't bad—but then he had me do the Banko material. I didn't really focus on the Banko material because I really, really focused on the Mac material. Mac is such an epic role; it really is like an Elphaba-style, on-stage-the-whole-time, full-journey-through-the-show kind of role. When I did the Banko stuff, I was super relaxed about it because I had this attitude of this is not what I was really going for. It was just my instinct as Jay putting on the best dumb stoner that I could possibly put on, and it fit like a fucking glove, I guess. I didn't even realize I was being funny in the room until they were laughing. Then, all of a sudden, there I was—I was Banko and I hadn't planned it, not even a little bit.

2. Seeing you here, like in On the Town or Hands on a Hardbody, it’s clear you have a gift for comedy. Who were your comedy idols growing up? Who helped influence your style?
I guess I got to that place of humor through Jim Carrey. He's one of my heroes. He's totally my favorite actor ever, with his work in The Mask and The Ace Ventura movies. (I've always wanted to be The Mask for Halloween.) Lucille Ball is another actor that I've loved my whole life. I think she's a genius. I would watch I Love Lucy on Nick at Nite with my family all the time. Also Beavis and Butt-Head.

I was always the class clown. I was the queer kid in Texas that made people laugh, and it just came naturally to me. My dad was also a big influence on me as well—he was a goofball, life of the party, center of attention, knew how to hold court. Growing up in Texas in the ‘90s and the early 2000s—when Will and Grace hadn't quite hit the mainstream yet— humor was absolutely a way that I was able to get by, make friends, and make light of a situation that was actually kind of terrifying.

3. When you were in rehearsal for Scotland, PA, what did you really want to get across with Banko? What did you feel like you wanted to lean into or fight against with this character?
I wanted to find what made Banko tick. I didn't just want to be this surface value, stupid guy that smokes a lot of pot in the ‘70s. I wanted to give him a very strong purpose in life, and the text helped me a lot with that because all Banko really wants is love. He really wants Brenda to like him. He really looks up to Mac and Pat because their relationship seems so perfect. He just really wants someone to love and someone to love him. So, I just wanted to make sure that every single thing I said on stage hearkened back to that.
What did director Lonny Price offer during that time?
Lonny would reel me in every now and again when the characterizations that I came up with would overtake the need. So, it was nice to have him there as someone that was checking me, because I was having so much fun with the role and getting such a good response that sometimes I would lean in to getting the response as opposed to sticking with the truth. You're only going to find the humor if you can find the absolute realism.

4. What’s your pre-show like for Scotland, PA? What are you doing or listening to in order to get yourself there? Does that epic wig play a part in the process?
It's definitely the wig, man. The wig does 75% of the work for me. They glue sideburns on my face too. The look is crazy! It truly does help me transform. I also know growing up in Texas, I have a tendency to have bad posture—because I was trying to hide myself a lot growing up and I'm a little hunched over—I don't carry necessarily myself with strength and confidence a lot in life. I really fought my whole life against that—I tried to go to yoga and tried to stand up straight and tried to walk down the street like a man. But I made sure that Banko absolutely had none of that manliness; he's constantly guarding his heart. I truly wanted to go back to a physicality that was Jay in middle school, so that that part of it did a lot of the work for me too. As long as I had bad posture and that wig, everything was fine.

There will be good tunes for sure. My taste in music is so eclectic that I don't Spotify or any of the other streaming music services to try to fit me into a box with their algorithms. My playlists that I make are crazy, and they go anywhere from like women in jazz to musical theatre in the ‘80s to classic rock to pop and rap. My playlist will be eclectic AF.

The third thing would be good lighting, man. Lighting is so important. For my birthday, my boyfriend got me those Philips Hue lights that you can control from your phone. They are so much fun. You can create any ambiance you want with any color that you want.