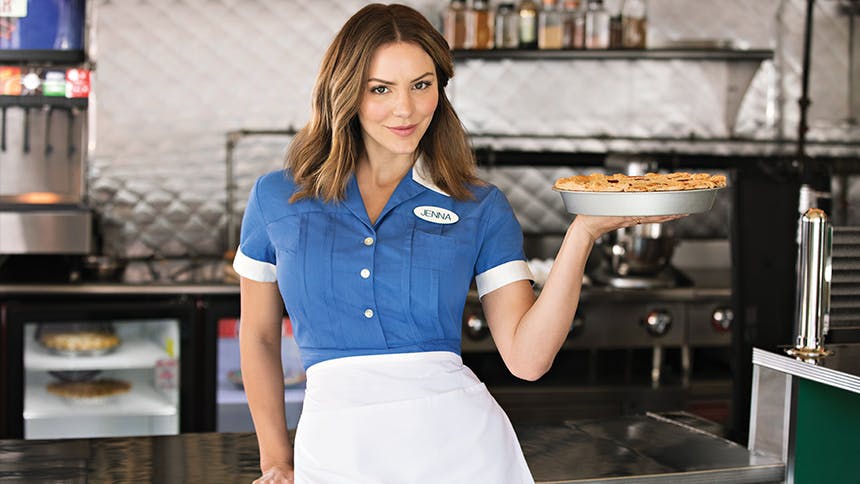 I was fortunate enough to return to Broadway’s Waitress

for the fifth time to see my fourth Jenna (American Idol and Smash star Katharine McPhee in a smashing Broadway debut), and somehow each time I see this show it grows on me more and more. We made no secret of how much we loved Betsy Wolfe as Jenna a few months back, but there’s a magic happening now at the Brooks Atkinson Theatre that needs to be witnessed.

In its second year on Broadway, Waitress truly soars, thanks to a killer casting combination. Let’s start at the top: Katharine McPhee picked a pretty perfect vehicle to make her Broadway debut. She lands all the comedy; she delivers on those heartbreaking moments; she finds a strength in this character that makes her journey feel all the more rewarding; and she sings the most incredible live version of “She Used to Be Mine” that I have ever heard—no hyperbole. It was stunning and the prolonged applause stopped her first performance.

Next, we look at the OGs of Waitress: Drew Gehling & Christopher Fitzgerald. Drew is bigger, broader, goofier, and yet more charming than ever as Dr. Pomatter. He’s so adorkable you can’t help but love him and his and Jenna’s budding romance. In his track, Christopher Fitzgerald amps up his Tony-nominated performance to the point where every time he exits the stage, there is applause. In other words, he remains a complete joy.

The ladies, NaTasha Yvette Williams and Caitlin Houlahan, are like ingredients in one of Jenna’s pies. They seem so different and so unique that you think how is this going to come together, but the result is absolutely delicious. NaTasha lands joke after joke like a sitcom queen of yesteryear. Like Lucy or Bea Arthur, she does more with her facial expression than most actresses can with Neil Simon. Then her explosive voice on “I Didn’t Plan It” brought that number to the next level for me. Meanwhile, Caitlin remains the most charming Dawn I’ve seen. Her “When He Sees Me” is a highlight of the entire evening. By the musical’s end, I wanted to be these characters’ friends IRL.


Lastly but most certainly not least, Ben Thompson makes for a compelling, polarizing Earl. He’s wonderful in the role in that you don’t like him or root for him—he’s menacing and selfish. But Ben is also so talented that I wanted more and more of the character. When he sang “You Will Still be Mine”, I shouted, “Damn!” His breakdown before “She Used to Be Mine” was one of the finest acted moments in the show. He and McPhee are a dynamic duo and their scenes are truly next level.

All this to say, get yourself over to Waitress before this lightning in a bottle company changes up.