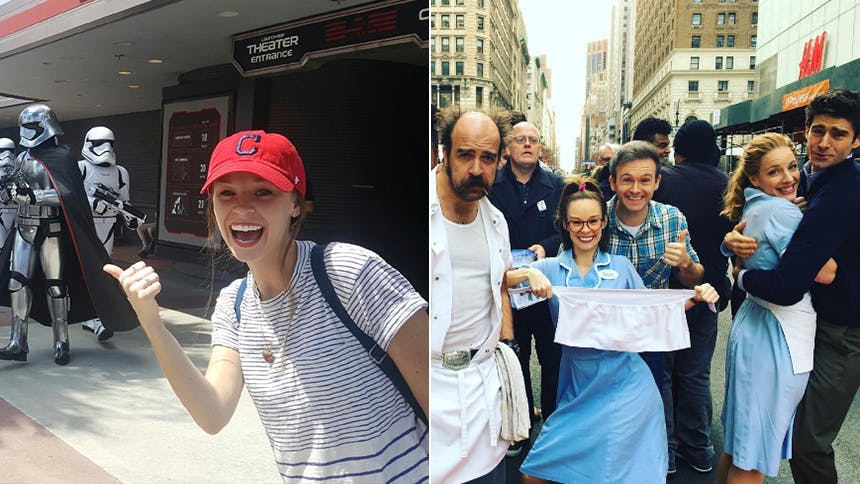 . Fans of TV's Girls may recognize Houlahan from her appearance as surf camp hostess Amanda-Lane on the season six premiere. She also appeared as Jane Darling in Peter Pan Live! and as Carolyn in The Bridges of Madison County tour.

Get to know Caitlin better as she talks with BroadwayBox about joining Waitress, pre-show rituals, and her standing Monday night date with The Bachelor.

1. The first person I called when I booked Waitress:
My mom, of course! She had heard "I Choose You" by Sara on the radio multiple times that day, was convinced it was a sign, and was totally waiting for me to call.

2. My pre-show prep for Waitress includes:
Chatting and giggling with Charity Angél Dawson while we put on our makeup. And then all of us gather backstage before the show and do a "pie" huddle and choose a pie of the day. And then I go into my corner and I do a few quick yoga poses/stretch and a couple final vocal warm ups.

4. The thing that surprised me most about joining the Waitress company:
That joining felt like a warm hug :)

5. My most memorable audition story:
I honestly don't have one. Most bad auditions I try to forget immediately. For my own sanity. LoL.

6. The coolest or most special thing I bought while on tour with The Bridges of Madison County:
I got these awesome vintage roper Justin boots from this cool little store in Deep Ellum in Dallas that happened to be in my size (aka toddler-size feet). They may be my favorite purchase ever.

7. Three adjectives to describe myself in high school:
agreeable (my senior year I was voted "nicest"), outgoing, empathetic.

8. Girls character I most relate to:
Shosh, fer sure.

9. My ideal day off from Waitress includes:
Sleeping in, making a big breakfast with a nice cup of coffee, watching Kathie Lee and Hoda, taking our dog, Moony, to the dog park, doing all the laundry, talking to my mom on the phone, ordering pizza, and then sitting down to watch The Bachelor (with candles lit). This is pretty much what happens every Monday.

10. The thing I hear most often at the Waitress stage door:
"She really wears her hair like Dawn!" And, "You look like you're 12."

Get yourself over to Broadway's Brooks Atkinson Theatre to see Caitlin Houlahan as Dawn in 'Waitress'.