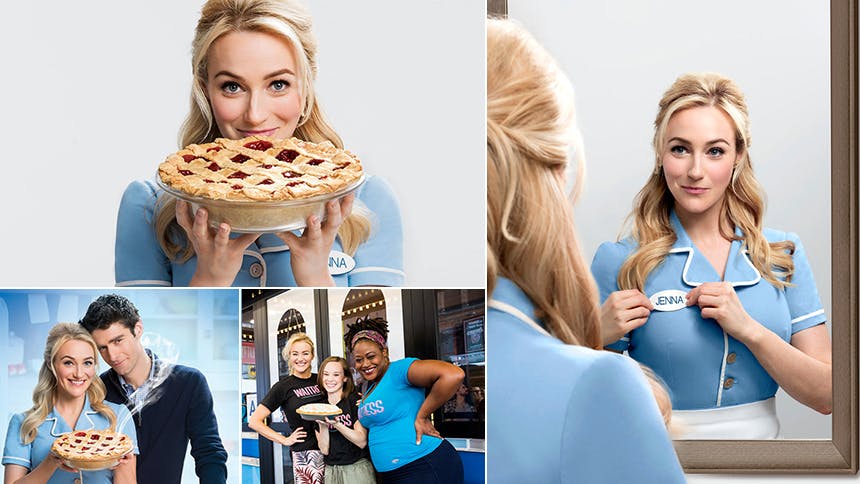 Like Bernadette Peters in A Little Night Music, Brandy Norwood in Chicago, and Heather Headley in The Color Purple, Betsy Wolfe's star turn as Jenna in Waitress

is a reinvention and a triumph that shouldn’t be missed.

Here are just five reasons why you need to run over to Broadway’s Brooks Atkinson Theatre to see her live.

“What Baking Can Do”

Anyone with even a passing familiarity of the Broadway scene over the last seven years or so knows Betsy Wolfe has some serious pipes, and when she unleashes their full potential in her first big number, you can feel an energy shift in the theatre. It takes her a mere 3:30 seconds to have the house in the palm of her hand. It’s remarkable. I want to own this version. She’s serving major star quality—so much so that there was a moment where I thought, “Is she always finding her spotlight like that or is Betsy absolutely radiant right now?”

The performance I attended Dr. Pomatter was played by the brilliant, hunky comedian Chris Diamantopoulos, and their scenes together are an absolute highlight. In her interactions with him, Betsy’s Jenna is charming, effortless, and just the right amount of self-deprecating. This Jenna is not defeated yet; from the jump, you know she can get through it, you just don’t know how. In their later scenes (like the scene where she teaches him how to bake a pie), I love how Betsy is always surprised (with tears in her eyes) by his kindness and interest in her. It’s so moving.

The Work Dynamic at the Diner


It’s a very tricky dance to take three very different types, throw them together, and have the audience believe that yes, in fact, these three people would be friends IRL. The dynamic happening at Joe’s Pie Diner right now nails it. You see why these women would be friends and not just co-workers, and there’s never a doubt that there is real feelings between them.

There is a beautiful journey Betsy Wolfe takes in these “dear baby” speeches. You watch a change in this character with each repetition—you see her grow from reluctant mom to the kind of mother who would make life-changing sacrifices for her newborn. It really demonstrates what a terrific actress she is.

Betsy Wolfe does more in the last 25 minutes of Waitress than some leading ladies do their whole show. The “She Used to Be Mine” is everything you want, but more importantly the labor scene (which always felt a little like an epilogue to the 11 o’clock number) now feels like the climax of the show. Her performance is as layered as a prize-winning Jenna pie. There is so much comedy there, mixed with these beautiful, raw moments of emotion, and the LIT vocals are just a sweet topping. Betsy illuminated moments in that scene that I did not know where there the first three times I saw this musical. Bravo!

Run over to Broadway’s Brooks Atkinson Theatre to see Betsy Wolfe as Jenna in ‘Waitress’.

Waitress
Best Priced Tickets
Newer
Get Ready to See Violet as Trista Dollison Brings Instagram Along for a Two-Show Day at Broadway's Charlie and the Chocolate Factory
Older
Friday Playlist: Summer on Broadway—Beach, BBQ, or Road Trip
Sign up for BroadwayBox Discount Alerts