Once On This Island Star Lea Salonga Reveals the Stories Behind Her Disney Hits, Miss Saigon, Les Miserables & Other Beloved YouTube Videos 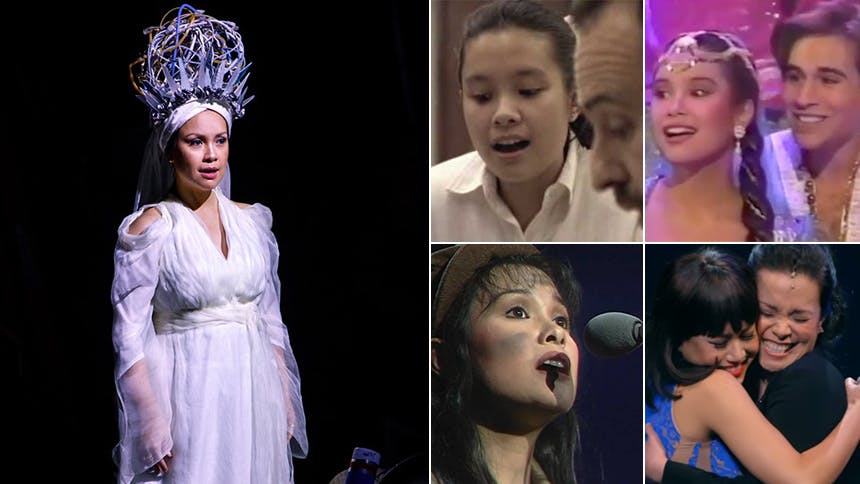 Tony Award-winning stage icon Lea Salonga is back on Broadway thrilling audiences as Erzulie (the beautiful Goddess of Love) in the acclaimed, can't-miss revival of Once On This Island

. Her gorgeous song "Human Heart" is a highlight of the entire evening.


BroadwayBox caught up with Lea to reminisce about some of her beloved musical and film credits and get the stories behind six of her most popular YouTube clips.


When I look back on it, there are still parts of me that can’t believe it actually happened because it was epic and majestic.

The Royal Albert Hall is such a beautiful place—you have to actually see it to feel how incredible it is. Video can only show so much. I remember there was a dress rehearsal that afternoon and the actual performance that night so after that rehearsal I headed as far up as I could at the suggestion of one of the people in charge. (I think the Associate Director of the production that was running at the Palace.) He said, “Go as far up as you possibly can and then look down and see the stage from that vantage point.” I followed his advice and he was totally right. It’s breathtaking. It gives you a sense of scale and perspective and just how big a deal celebrating 10 years of Les Miserables in the UK actually is.

Then I went back down and we all started to get ready. I remember sitting beside Ruthie Henshall—she and I were friends from Miss Saigon so I was most comfortable by her. It was great to be able to just sit there and watch her prepare to play Fantine, and for me to play Eponine, and us to be at this stage in our lives. She was in the ensemble of Miss Saigon and an Ellen cover and to see her in this elevated position was incredible to witness.

The 25th Anniversary didn’t seem as weird, and it was great I was getting to play the role [of Fantine] for a substantial amount of time by the time the 25th came along. I felt I had the role in my body, as where for Eponine I had only played it for two and a half/three months on Broadway; but yet I am so closely identified with Eponine more than I think I ever will be with Fantine. I think because of what my casting signified and what it meant. It was a big deal when they cast me as Eponine because no Asian actor had ever played it until then. Then it opened so much after that.


They actually got the original people that voiced the song to perform it at the Oscars, and that was really cool. I had to leave Les Miz a week early in order to do that. I had a week of rehearsal for this. A couple of dancers first walked us through the path we had to take, and looking at it, you wouldn’t think it would require a week, but it did. We were surrounded by dancers, a lady with a snake, fire. It was a visual feast. Because of the tech requirements, we were not able to sing it live. We did a prerecord a couple days before because the forklift that did the magic carpet move at the end was so loud and the sound would go into our microphones. It was one less thing to stress out about. That forklift would have totally destroyed the illusion—and it was not smooth. Nope!


That was nuts! It was so much fun though to do. It was so expansive! The experience of actually rehearsing it and singing it with that orchestra was crazy. The 10th Anniversary of Les Miz had just finished, so I flew from London to New York for a week (if that) and then headed off to Los Angeles to record it then back to Manila. It was a whirlwind trip. Those two things happened one right after the other. It was great, but then a year later I had to come back and rerecord the vocals, and then come back a year after that and rerecord it again. It was a process! Thankfully I got lucky with “Reflection” and “A Whole New World”. I could just sing them until I die and it will be fine.


It’s nuts how many views this has. It’s coming on 30 years, this November, since the audition—and this video is actually my first callback. If it was the actual audition, you’d see me singing “On My Own” for the very first time—that was my audition, that and “The Greatest Love of All”. There were no cameras for the first couple of days of auditions but they came in for callbacks. I still get mail from kids that watch it in drama class and a lot of the kids were not born when this happened. To put it in perspective, Hailey Kilgore (the star of Once On This Island) was not born when I got the Tony Award. It’s wild. I am just too thankful that people still think of my work as relevant enough to hire me still, 27 years after my debut. If I could tell the girl in this video something, I would say, “Strap yourself in!” The ride is crazy and you don’t know what to expect. It demands a lot not only of the actor but of the human. It’s not just the show you’re preparing for, it’s everything that surrounds it.


They had invited members of the original company to come in and sing for this gala to celebrate 25 years from Miss Saigon’s opening in the UK. It was less of a big deal for me to sing the song, but it was a big deal for me to be able to watch Rachelle sing it. I pretty much kept my eyes on her for much of that. When we were in Manila, she asked me if she should even audition for this. I said, “You have to! You never know what the outcome is going to be. If you don’t get the job, you don’t get the job but you have to try. You don’t know until you walk in and give it a shot!” So, she did and now look at her. Her life literally has changed. Rachelle is now back in the West End playing Eliza Hamilton, which is so cool. She’s incredible. I’m so glad she decided to give it a shot.

“Total Eclipse of the Heart”, The Voice Philippines Finale, 2013


The experience of The Voice is always fun. It is quite stressful. All the way up until the last day, it’s a stressful process for everybody (the coaches, the contestants, the production). It’s a BIG deal and incredibly popular. Stakes are really high, and it could quite possibly change the life of the person that wins (and even the person that doesn’t win). We got lucky that year, we recruited a very popular comedian named Vice Ganda, who performed the number with us. But we knew in order for it to be really, really funny, we had to take it to an extreme level of seriousness. We can’t make the obvious jokes or ham it up. We have to be in it, and we were, and I think that’s why it ended up being an incredibly popular clip on YouTube for people to watch after the fact. This was one of the most fun things we’ve ever done.

Don't miss Lea Salonga live in 'Once On This Island' at Broadway's Circle in the Square Theatre.