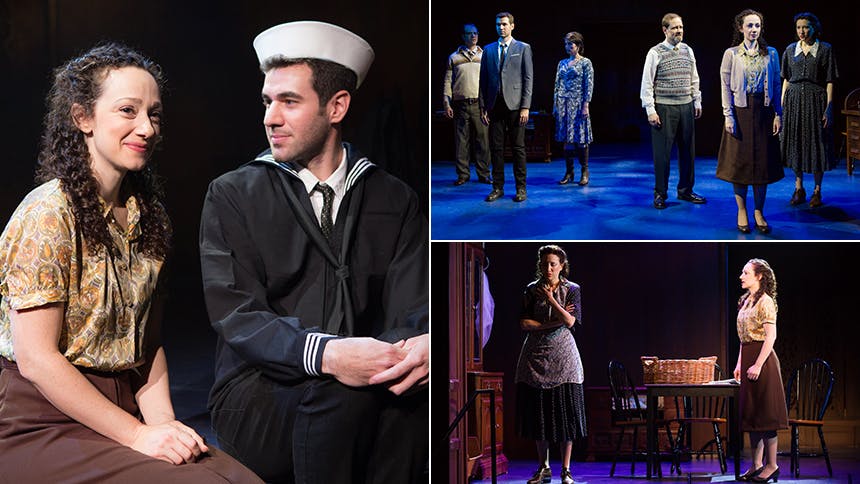 Megan McGinnis stars as Sherri in Goldstein, a new off-Broadway musical that follows three generations of a Jewish-American family. Megan previously starred in Beauty and the Beast, Little Women, Les Miserables, Thoroughly Modern Millie, Side Show and off-Broadway's Daddy Long Legs. BroadwayBox caught up with her to discuss exploring a new side of herself in Goldstein, the most challenging role of her career, and her dream project with her hubby.


1. Goldstein is described as Rags mixed with a touch of Fiddler on the Roof. How do you actually describe the piece to friends and family before they come?
Goldstein tells the story of three generations of an immigrant family. It spans from 1910 (when the first generation arrives in America) to present day. Louis Goldstein, of the third generation, publishes a book about his family’s history. You see how all three generations are affected by the novel, through flashbacks. It’s got secrets and lies and grudges and regret and eventually, healing. It’s family!

2. What do you especially love about the story of Goldstein? What attracted you to the piece?
I love playing one character from age 10 to age 70! It’s a great challenge and tons of fun. It’s also been really gratifying to portray a family that mirrors some of my own background. It’s rare I get to portray the Russian-Jewish side of my heritage. It’s encouraged me to delve into my own family history and learn more about what my ancestors went through to survive in this country.

3. What’s your favorite memoir you’ve read?
Oh gosh, does How Toddlers Thrive count? Because all I read these days are books to help me raise my 15-month-old son! Seriously though, I’ve read so many good ones (in the days before my son). Frank McCourt’s Angela’s Ashes stands out because I read it in my snobby years of thinking only classic fiction was any good. That book made me realize there was so much more out there.

4. Which stage credit of yours challenged you most at first, and how did you overcome the challenge?
When I began rehearsals for Daddy Long Legs, I couldn’t imaging carrying a show where I didn’t leave the stage. I couldn’t imagine singing that many songs—or honestly, learning all those lines! We were creating the show, so everything was constantly changing—songs were put in and taken out, lines were rearranged and scene were rewritten, and we only had a three week rehearsal process. I was a nervous wreck. I think only time allowed me to overcome my fear. I also loved every minute of working on the show, so my passion overpowered the obstacles. Soon enough, I was seven years into doing the show, while it became much easier, it never felt old.


5. What was the highlight of the Thoroughly Modern Millie reunion concert for you?
I have to pick one?! Every minute was perfection. Millie was such a dream to be in when I was in the ensemble, back in 2003. I had seen the show ten or so times before I even auditioned. I was so in love with it. To be able to play Miss Dorothy now—to be given the honor of joining the incredible original cast—was beyond my wildest dreams. And I got to play the best friend of my actual best friend! What could be better?


6. What’s a movie about family that could always make you cry?
It’s A Wonderful Life. And my husband does an incredible Jimmy Stewart impression.

7. You and your husband Adam Halpin just performed together in off-Broadway's Daddy Long Legs. What’s the next dream project to do onstage together?
Sunday in the Park with George, please!