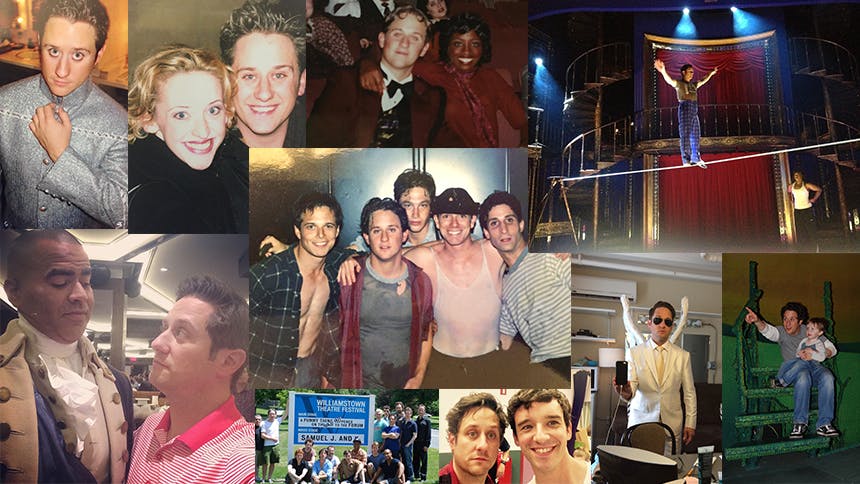 Scroll on as Chris shares with BroadwayBox his Broadway scrapbook—filled with cool, rare photos and awesome unheard stories from his acclaimed stage career.

Isn’t this fun? We did Grand Hotel at the Central Piedmont Summer Theatre in Charlotte, NC after my junior year in college. Montego Glover and I were in this company together and we were pals. I can’t tell you how long it took me to get those two little curls on the top of my head. It was hours and hours and lots of trial and error to get that.

Nicholas Martin revived this play at Williamstown, and it was easy one of my top three theatrical experiences ever. It was incredible. They put an entire city street on stage and the East River was a swimming pool in the orchestra pit. This was around ’96, and Scott Wolf and I are still best friends from that experience.

You can see Joe Mantello on the left, Jeremy Shamos, and then me, then Drew McVety at the piano, then Ben Schaeffer and Michael C. Hall, Michael Irby, Greg Zola, and Ken Leung. A bunch of these guys are still dear friends of mine. That was the Terrence McNally show that got protested. It was exciting to be a part of something that was having an effect on people—somehow our play and the way we were telling it could inspire such strong feelings and dialogue. It made what we do feel important and necessary somehow. 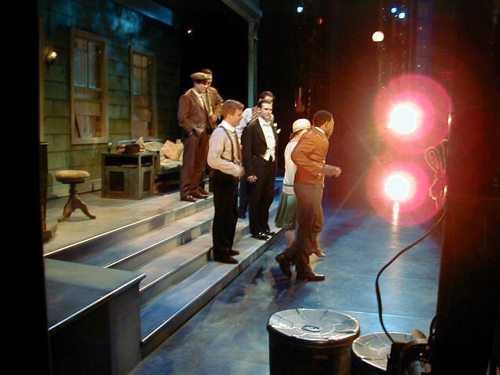 This is Saturday Night at Second Stage. The first show Sondheim ever wrote 40 years ago, and it was my first official musical in the city and my first Drama Desk nomination. To work with Sondheim that young in my career…It was one of those parts that came along early on and it was such a great fit for me. The song “Exhibit A” was a great beginning for me learning how I worked. 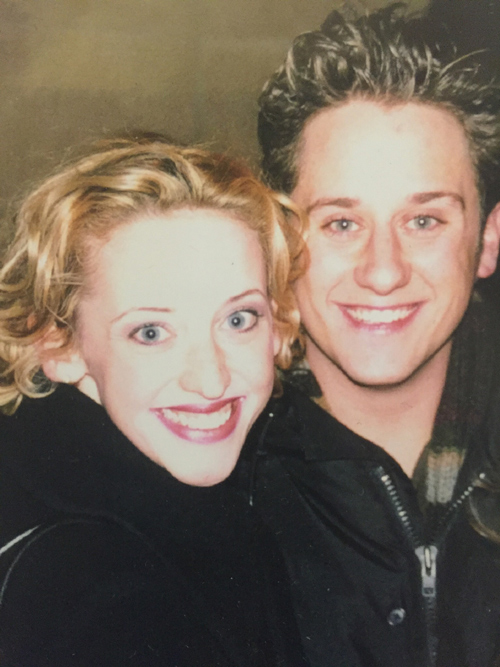 This was the workshop of Amour right before we went into official rehearsals on Broadway. One of the great things about making my debut in Amour is if I go to Joe Allen’s I could see my name on the wall—not just the show poster but my name is on the actual poster—so that’s one great thing that’s come out of it. But very early on, it gave me a window into the realities of the Broadway business, and the good news is we all had a delightful time. The stars have to align and sometimes it’s in your control and most of the time it’s totally out of your control. 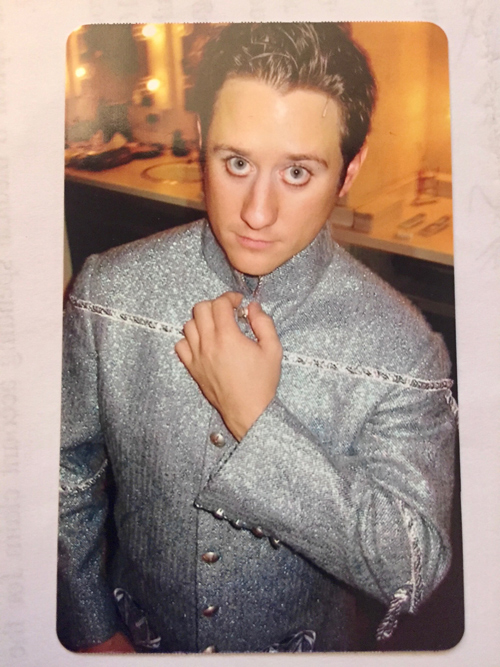 Joe Mantello took this picture. He was going around taking portraits of everybody, and he took this of me in my Tin Man outfit. Wicked was just remarkable. You feel like you know what is going to have an impact on people in the rehearsal room, but, for me, it wasn’t until the first preview in front of an audience when those first famous chords played. The response to that, the wall of sound that came from the audience, something crystalized in that moment for me about what was going on. This was going to be something that was very special. You could feel it in a way I don’t know if I ever felt since really. 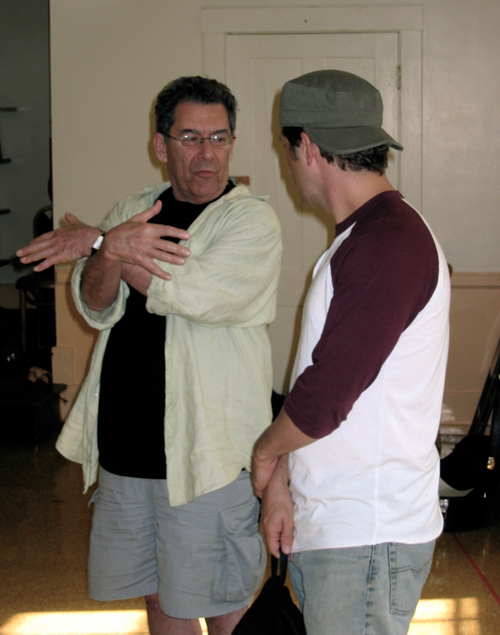 I’ve been going to Williamstown for 15 seasons. It’s such a beautiful spot in the Berkshire Mountains. I started in 1993 as an apprentice and what has kept me going back are the people. Everything has run through that place for me, from meeting my best friends to working with my favorite people that I’ve ever worked with. Jessica and I got married up there, we worked up there as actors together, and with her directing me. It’s just been an artistic home for all those years. It’s one of those places that will remain very special. 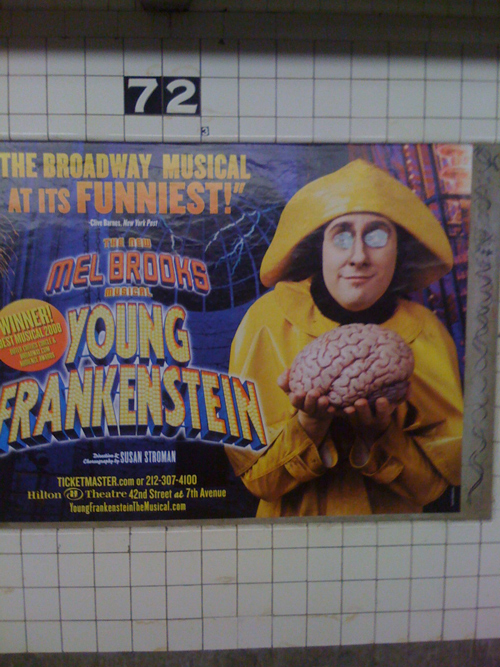 I was in my subway station on my way to go do Young Frankenstein and there was this ad where someone gouged out my eyes. It was very humbling and it tickled me. I grew up utterly worshiping Mel Brooks, so that was a dream come true without question. On the first table read for rehearsals, my son Charlie was born so it added an extra layer of goodness and challenge to that whole experience. 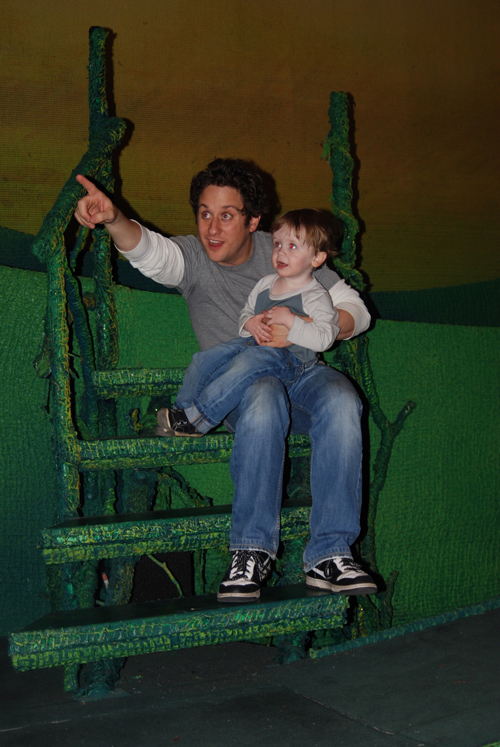 This is me and my son, Charlie, on the Finian’s Rainbow set. That show was like getting to sing the most glorious music ever written with a big, juicy orchestra and the most delicious lyrics ever. The richness of the material, for me, is what made that so special.

Forum was really [my wife and the production’s director] Jessica’s idea. Nicholas Martin, who was the Artistic Director of Williamstown at the time, was going to direct it himself, and he asked her to be in it. She was not interested in being in it, but she said, ‘I just love the show so much. What would be a fun idea is if you took it back to Plautus’ time (where the stories take place) and presented it the way they did back then with an all-male troupe. That would be another possible way into the comedy.’ Nicky in that moment looked at her and said, ‘You do it. You direct it. That’s the idea.’ It was one of those magical moments where somebody gives you a break and it was a marvelous hit for them and all of us.

Then we got an opportunity to do it again in Red Bank, NJ, and Michael Urie joined us on that one. He’s the bees knees. I think the world of him. He’s really fun and so skilled and so generous.

Trying to find a way this fits on Broadway is the challenge of it. I would love to do it again. Sondheim loved it. He’s a huge fan of the idea and loved the production. 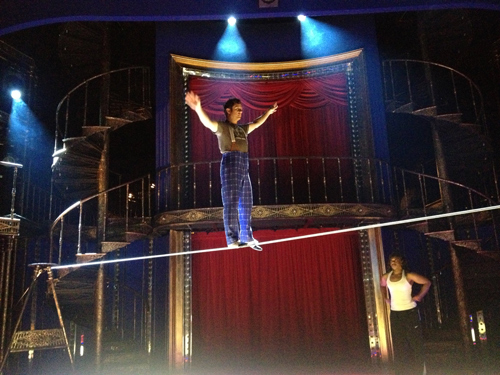 Barnum was really incredibly challenging and incredibly innovating. It basically required every possible skill that I’ve ever thought I might have. These were skills I’ve been toying with and fascinated by my whole life—juggling, tumbling, gymnastics, slight of hand magic—and they culminated in this character and this show.

I was at an opening night at BAM in Brooklyn and [Chicago producer] Barry Weissler was there. Out of the blue he goes, ‘I was thinking, do you want to play Billy Flynn? I think you would be great.’ And I think I just laughed at him. I thought he was kidding. Then the phone call came; and the schedule was right; and why not? I ended up having a ball. It was really fun to put my own spin on it.

An Act of God was fun. We had a ball. Jim Parsons is just so special. 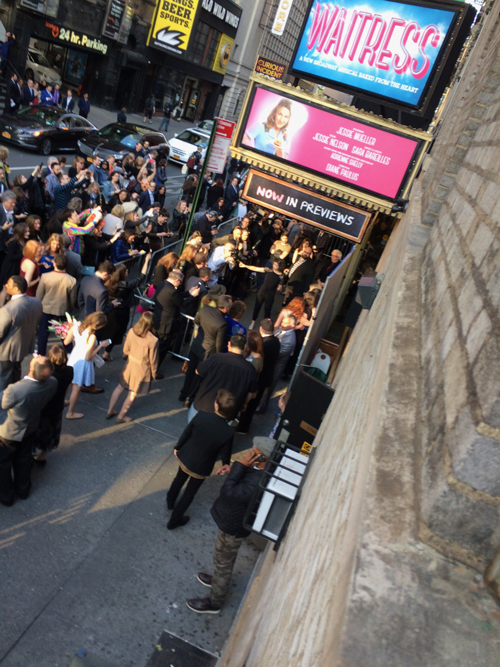 This is me peeking out on opening night from my dressing room window. In the picture is the creative team [on the red carpet]. Nick Cordero and I were soaking it all in from our dressing room perch. 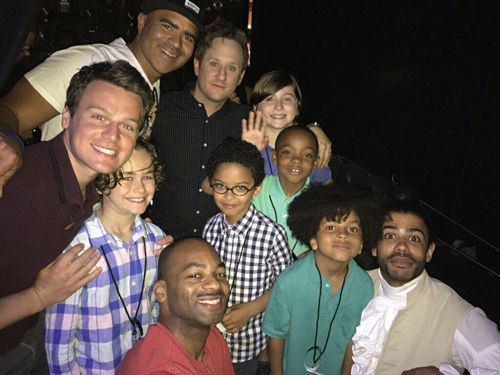 At the Tony Awards, James Corden did a bit with our younger selves, and these were all our young doppelgangers. My arm is around young Chris Fitzgerald. 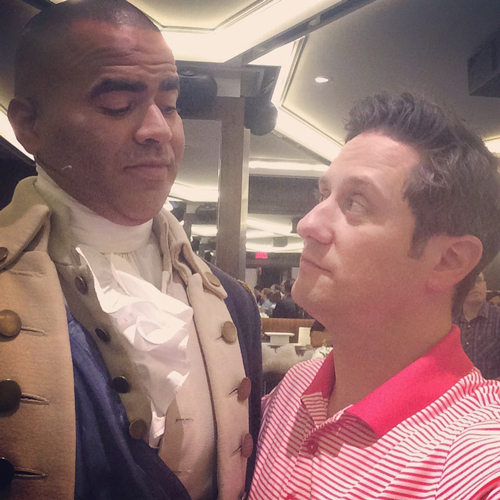 This was also at the Tonys. This is Ogie meets George Washington. It’s funny because Ogie is obsessed with the revolutionary war, so getting the chance to meet the actual George Washington was an incredible moment in Ogie’s life.