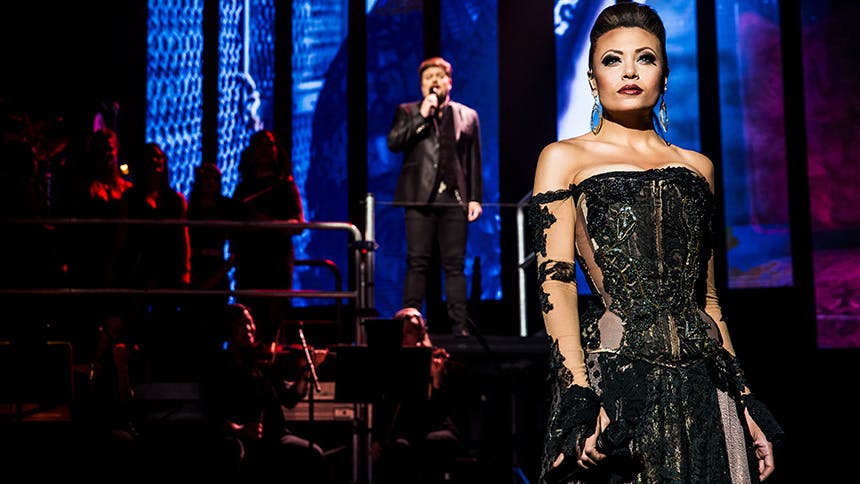 , alongside fellow fierce ladies Kimberly Nichole & Chloe Lowery. BroadwayBox gets to know each of these incredible singers this month in our "Meet the Ladies of Rocktopia" series. Next up, Alyson talks with us about making the leap from The Metropolitan Opera and London's Royal Albert Hall to Broadway, how she keeps warm for this huge vocal sing, and how Rocktopia brings her childhood dreams to life.


1. How do you care for your voice during a run like this?
The most important thing for me is to make sure I have a slow and steady warm-up before each show, and to try not to do too much talking in between shows. This show requires the extreme highs and lows of my vocal range, so there's no room for error!

2. What’s your warm-up like for Rocktopia?
Lip trills, vowels (i-e-a-o-oooo) throughout my range, and lots of "stretching" the voice in a forward and high place to reach those stratospheric notes in a healthy way that I can do 8 times a week!

3. Do you remember the first time you felt or knew your voice was special?
I don't think I ever knew until my first voice teacher, at the age of 12, told me. She couldn't believe my age when I sang for her and told me I MUST train classically, that I had special instrument beyond my years and that it was important I take care of it and train slowly and steadily as I grew up.

4. What’s been the biggest/most challenging sing of your career so far?
Perhaps the title role in Madama Butterfly. Not only is it a vocal tour-de-force, but it is a wonderfully deep and intense acting challenge as well. Finding that balance between vocal and technical perfection, yet letting yourself go emotionally is something I will not soon forget, and hope to have again soon!

5. Did you ever dream about being on Broadway when you were younger? Were you a theatre kid growing up? If so, what roles did you play?
I wouldn't necessarily say I was a "theater kid" growing up. I played sports, played the piano, was in lots of clubs and involved in extracurriculars, and on sports teams, etc., but I always did the spring musical each year in high school and took my private voice lessons outside of school. In high school, I was Nancy in Oliver!, Aunt Eller in Oklahoma!, and Cinderella in Into the Woods. I knew that I was always meant to be a performer in some aspect—and singing was the route that led me to becoming that! I think like most performers with big dreams, that definitely included Broadway, being on TV, and on the greatest opera and concert stages. I feel VERY lucky and blessed that those dreams are coming true!

6. What’s been the biggest pinch-me moment of your experience with Rocktopia?
Wow... that's a hard question. I think the day I got the call from producer Bill Franzblau, just hours after my audition, offering me the part was a pinch-me moment for sure! Then, immediately after opening night, walking the carpet, talking to press about what just happened, "OMG, I JUST MADE MY BROADWAY DEBUT!!!" And, having so many family and friends in the audience and sharing that experience with them made it so very special!!!

7. Whose voice did you idolize growing up?
So many voices... everyone from opera greats Leontyne Price, Kathleen Battle and Renee Fleming, to rockers Eddie Veder, Chris Cornell, to the incomparable Whitney Houston. A great voice is a great voice!

8. Right now, Rocktopia on Broadway features Train’s Pat Monahan, Cheap Trick’s Robin Zander, and Twisted Sister's Dee Snyder as guest artists. If you could invite any lady from the world of rock to Rocktopia for a stint, who would you pick?
Oooo, tough question....Someone with range and soul and who could handle the rock and pop elements of the show. I think Kelly Clarkson would KILL some of these numbers. Christina Aguilera can also wail. I also love Jill Scott—another great voice!

Dont' miss Alyson Cambridge live in 'Rocktopia' at the Broadway Theatre through April 29.