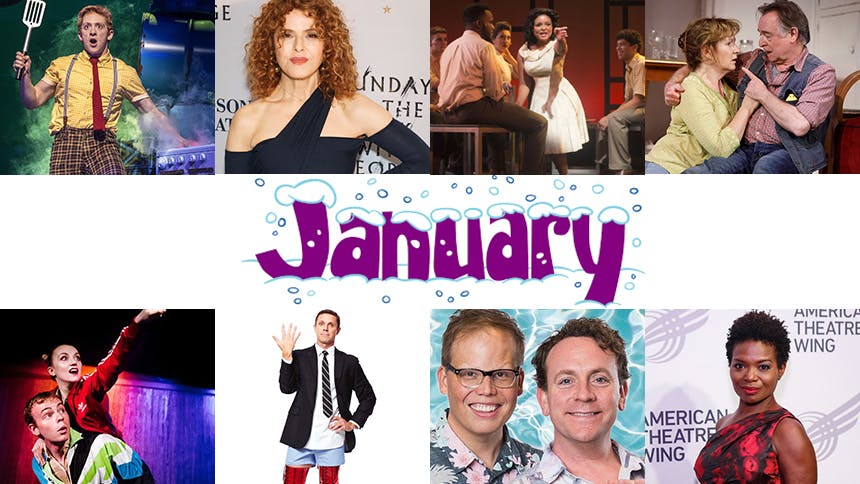 If you haven’t seen the new hit musical SpongeBob SquarePants

, run to the Palace Theatre and go get engulfed by joy, creativity, and theatricality. We named it our favorite new musical of 2017, and this month we have an exclusive discount so you can see the unbelievable Ethan Slater & Co. for less.

Now time to talk about the other exciting replacement stars giving their shows a little facelift in 2018. Grammy winner and RHOA star Kandi Burruss said that as Mama Morton in Chicago; a shirtless Norm Lewis and a fierce Tamyra Gray whip up some trouble and vocals as the gods of water and death in Once On This Island

; Jake Shears (of Scissor Sisters fame) turns the Tony-winning Kinky Boots into a proper kiki; Peter Jöback clinches the big gig as the 30th anniversary Phantom in The Phantom of the Opera; and Sara Bareilles is ready to serve it out in her hit musical Waitress.

, which given recent headlines feels more topical than ever.

Mark Addy (Robert Baratheon on Game of Thrones) and Maxwell Caulfield (the heartthrob from Grease 2, The Colbys, and Empire Records) star in Hangmen

, a dark comedy from Martin McDonagh about what happens to England’s second-best hangman when the law abolishes hanging. The US premiere runs at the Atlantic Theater through March 4.

from its creator and original star Drew Droege beginning January 17, and any excuse to revisit that show is worth taking.

arrives at off-Broadway’s Irish Rep with UK stars Colin Campbell and Evanna Lynch (Luna Lovegood from the Harry Potter films). It tells the story of Runt and Pig, two friends who redefine the term bestie until their 17th birthday when romantic & violet urges change everything.

is a futuristic mystery set in 2047 and a piece of political theatre that explores the power of law, technology, and news media. Once you’ve binged Black Mirror, get over to Theatre Row.

, a theatrical piece that examines a family’s individual experiences surrounding a single event: a mother takes her anorexic daughter’s anti-depressant. Based on a true story, The Pill presents the event from the perspectives of five different family members.

Before she returns to Broadway this spring as the titular character in Summer: The Donna Summer Musical, Tony winner LaChanze will sing the house down at the Highline Ballroom for one night only on January 15.


54 Below presents a concert of the cult musical Calamity Jane

returns to NYC on January 4. It tells the true story of the brave souls who rode the buses in the segregated south in May of 1961 as a form of peaceful protest.

back to 54 January 23-30 and the theme of the evening is going to be MAJOR VOCALS.

Chicago
New
Discount up to $50