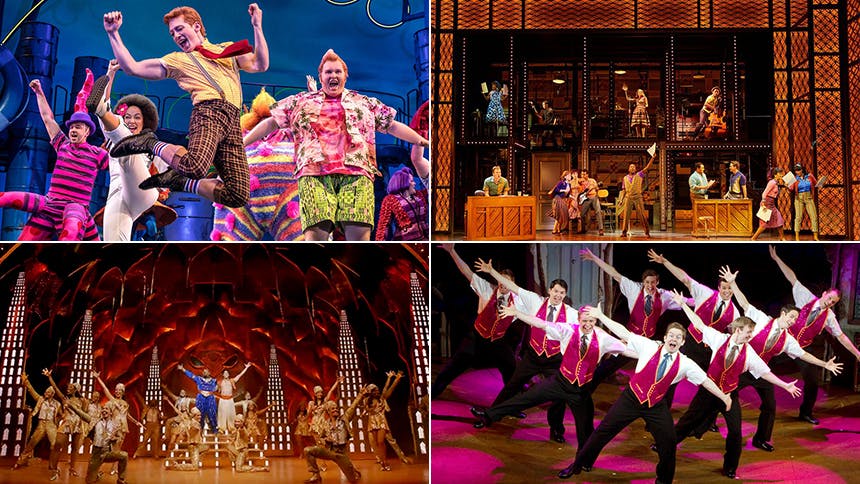 These big, current Broadway musical numbers not only make you smile from ear to ear, you also bop along in your seat for sure.


Seriously not since “Good Morning Baltimore” has an opening number shot you out of a cannon of joy the way this one does. It feels so full. You meet each character and get acquainted with the world; then the magical moment when The Krusty Krab opens for business and Bikini Bottom and its colorful inhabitants fully reveal themselves, it makes your heart soar.

“Mama Will Provide”, Once On This Island


Alex Newell takes no prisoners in his Broadway debut as Asaka in this intimate revival. Alex slays the MF house down with the big showstopper—belting for the old gods and new. He works the fan; he works the garment; and he leaves that audience in a state.

Nothing brings a smile to my face quicker than watching all these talented Beautiful performers sing their faces off to some of the most iconic tunes of the late ‘50s. The way the set opens up, the wonderful arrangement of the songs, the color, the lights—it’s a moment so rich you don’t know where to look for fear of missing something.


This is THE moment for the Disney musical. The Lion King has “Circle of Life”, Frozen will have “Let It Go” and Aladdin has Major Attaway blowing your mind as he continues to build this showstopper, bringing each moment to the next level—it’s like American Ninja Warrior’s Salmon Ladder for musical numbers.


We’ve said it before—and we’ll undoubtedly say it again for Bernadette—but there’s no joy like watching Bette (or Donna) kicking it with and being celebrated by a big, energetic chorus of men. Especially when you consider the scope of the full Harmonia Gardens moment, coming out of the epic “The Waiters’ Gallop”. It's what Broadway is about.

“Raise You Up/Just Be”, Kinky Boots


The finale of Kinky Boots is a party. The cast is up there living their best lives to that Cyndi Lauper beat and the electricity is contagious.

“Stick It to the Man”, School of Rock


Kids are cute onstage, and really talented kids are incredible to watch. School of Rock makes the most of this combo with their act one showstopper/rallying cry. Justin Collette and the kids make you want to stamp and shout along with them for every single second.

“Never Ever Getting Rid of Me”, Waitress

Christopher Fitzgerald is a treasure and should be treated as such. This moment could be hokey in the wrong hands, but thanks to his incredible comic timing, the number gets the biggest cheers of the night. You don’t want it to end…then that exit applause. Bravo, sir.


There’s nothing like when young Glinda and Elphaba get to Oz for the first time. The excitement of it all is punctuated with those fab Oz costumes and full choreography. The grand old Oz of MGM comes to fresh life here.

“Turn It Off”, The Book of Mormon


How could we not include a Mormon moment?! This tap extravaganza led by the hilarious Olivier winner Stephen Ashfield is just beyond. When that big ensemble of dancing Mormons change their vests, it’s game over.