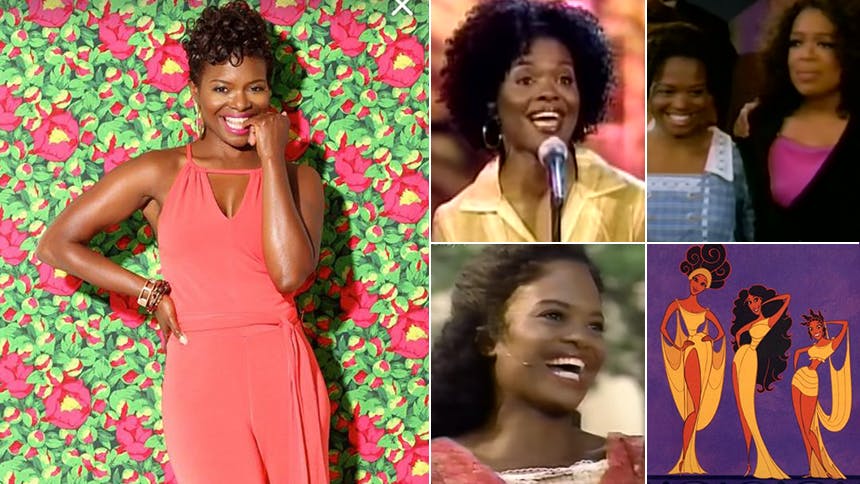 Tony Award winner LaChanze is gearing up to hit the road with her exciting new concert Feeling Good, promoting her new EP of the same name. LaChanze kicks off the national tour at NYC's Highline Ballroom on February 27 with a blend of music from the late ‘60s and ‘70s that has impacted her life, her favorite Broadway tunes, and her own original music. Before she gets all of America feeling good again with her incredible voice, LaChanze looks back and reacts to six beloved YouTube videos from her past.

“Waiting for Life” from Once on This Island on Rosie, 2002


That was great! We all couldn’t believe it was the 10-year anniversary, and Rosie is a huge fan of Once on This Island. She had become a real supporter of my work and wanted to have me on. It was a great moment, and it was great to have everyone back together. At that point, I had had children, I had been married, and it was after losing my husband—my life had changed so dramatically since Once on This Island. So for me, it was wonderful to have a chance to go back to that point in my life before all of it had happened. It was great for me to do at the time because of how good it made me feel.


That was a pretty powerful moment for me. From the moment I auditioned for it, I felt a kinship to the character. It was a great moment for me. I learned the song “The Color Purple” for the audition and it just resonated with me, so getting to perform it on Broadway and singing it for Beyoncé and Oprah and so many other great people was just outstanding. I wasn’t thinking about any of that because the character in that moment is having a come to Jesus moment. I could completely relate to Celie at that point because of how it lined up in my life personally. I just connected with her on such a deep level. It was wonderful.


Ragtime was great. I did the original LA production, which opened before the Toronto production came to Broadway, then I replaced Audra [McDonald] in New York when she went to go have her daughter. I was pregnant at the same time but she was further along than I was. Funny thing about Ragtime: both Broadway Sarahs got pregnant during the run of Ragtime. There’s something about that role. My husband and I had moved out to LA so I could do it out there. At the time, he was working on Wall Street and he handled all his clients in LA, but once I got pregnant I wanted to come back to New York and be closer to the people I care about and know. So when Ragtime asked me to be Sarah for that period of time, it worked out perfectly for me—to come back home and come back home to a Broadway show and working with Lynn [Ahrens] and Stephen [Flaherty] again.


Originally we weren’t doing it. Originally the cast was like Patti LaBelle, Gladys Knight, and a bunch of major R&B recording artists but they were not used to singing like the Broadway girls—we are trained differently. [Hercules] had been working with them for a while, then the musical director on that project said, ‘I think I can get a group of girls that can make this work.’ So they called me and Lillias [White] and Roz Ryan. We walked into the room and it clicked immediately. We had fun. It was our music; we knew what to do with it and we were showing off a little bit.


This thing was brand new for all of us. We all were learning that musical as it went along and the writers were changing it all the time, so originally there was a completely different song in place for me to sing there. When the writers presented “It’s a Sign”, I sort of flipped. It was perfect for this fun character, loving New York, full of optimism. It was great to play a part that was happy and comedic because a lot of the roles I’ve played up until that point were serious and dramatic. It was nice to do a show where I’m bouncing off the walls. I was actually a little nervous during this video because I didn’t know there would be so many cameras and social media happening. I was really aware of myself but I had to let it go and get into it, but it was nerve-racking initially.


This was a production of Handel's Messiah that we did with the Boston Pops Orchestra, and it aired on Great Performances on PBS—and I actually won an Emmy for that. It was so great; I know I keep saying that about all the videos but it’s the truth. This particular production was different for me because I had not been a part of a production done with an orchestra, so working with all those musicians, and feeling the depth and fullness of the music when I sang, was so inspiring. I was singing about what I love (which is God) so it was great for me. It was very uplifting. It’s one of the jobs I’m most proud of.