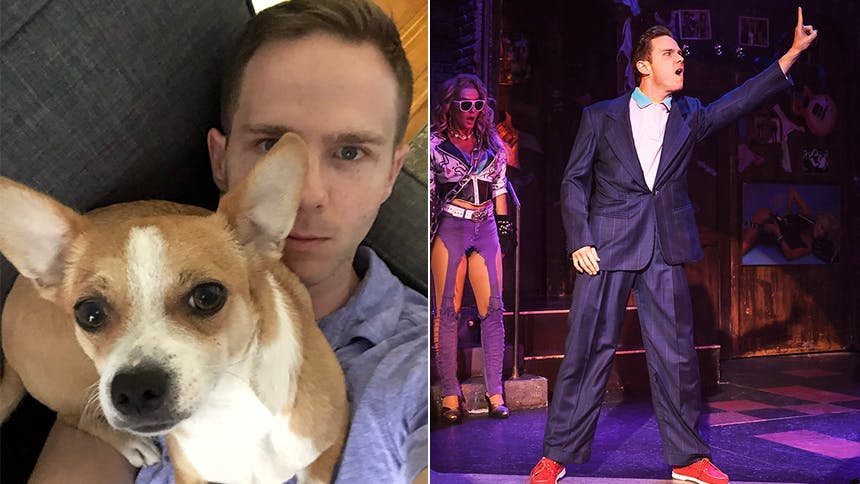 . Dane co-stars in the 10th anniversary remounting of the beloved rock musical after spending years playing Franz in the popular Vegas production of Rock of Ages (also, it's worth checking out his clever backstage video sketch series from that time).


Below, BroadwayBox gets to know the California native a bit better as he talks about his journey with Rock of Ages, where Franz would end up today, and how seeing Phantom at age five changed his life.

1. You’ve done this show for years between Vegas and New York. What do you love about Franz and Rock of Ages? What’s kept you in the Bourbon Room?
Franz is the dream role. I get to leave the heavy lifting to Drew, Sherrie, and Lonny, and I just get to come in, chew the scenery, and then leave for a while again. Who could ask for more? But seriously, I loved this show the moment it started. When I got the job in Vegas, I had never seen the show. When I watched it that first night, I was about 30 seconds in to it, and I said to myself, "I'm gonna be just fine here." I think it's that I genuinely love the show that keeps me hanging around.

2. What was your reaction when you found out you’d make your off-Broadway debut as Franz? Who was your first call?
My first call was my dad to to tell him I wasn't gonna make the family vacation we had coming up. So it was a good news/bad news kinda situation. But, of course, it was amazing. This is what you're working for! Working in NYC.

3. Rock of Ages famously takes place in the ‘80s, where do you think Franz is today?
I think he's probably the face of a multimillion dollar candy company. Because you know Hertz would have been on him to incorporate and franchise "Franz's Haus of Chocolate". And you know he's just the face because Dad is probably running the day to day business, if I'm being honest.

4. What’s your pre-show typically like? How do you find the energy for Franz?
This show is a beast, and especially doing in New York vs. Vegas, where I had my car and I lived 10 minutes from the theatre. I always say living in this city is like doing an extra two shows a week. It's exhausting. But I make sure I'm at the theatre really early and fully warm up my body. I know it sounds obvious, but it's easy to talk yourself out of making time when you're running late and busy, and you're like, "hey, I'm not a dance track so I'll be ok." Not the case. Warming up religiously and making time for the gym keeps my body feeling good and my energy up.

5. What’s your favorite film or TV show from the 1980s?
Film: Clue! TV Show: Probably Cheers or The Golden Girls.

6. How does Rock of Ages off-Broadway compare to Rock of Ages Vegas?
The venue is the biggest difference. In Vegas, we were at the Venetian in a massive theatre. It was technically a much bigger production, but I love the intimacy at New World Stages. I feel I connect with the audience a lot easier here.

7. What’s been your wildest audience interaction at Rock of Ages?
I always enjoy when someone inevitably yells out "You go girl" during the beginning of "Hit Me With Your Best Shot"!

8. Tell us a memorable audition story.
I decided to sing Marc Cohn's "Walking in Memphis" once, and as soon as I started singing I realized I couldn't follow the piano at all. I kept trying to get back on track, but it was useless. I sang every measure of that song out of time with the piano. Needless to say, that was the last I heard from them. To this day, I don't know if it was the accompanist who was off or if I was just an idiot. Likely the latter.

9. When did you know that you wanted to be a professional actor? Was there an early role that gave you the confidence and put you on this path?
I saw The Phantom Of The Opera when I was five years old and decided there wasn't gonna be anything else I did with my life. Somehow it stuck.

10. What’s a movie you love so much you know every single word? What do you think connects you to it?
The Big Lebowski. The Coen brothers are just speaking my language. That's my sense of humor in a nut shell. I've seen that movie countless times and there's still new things I laugh at every time I see it.

Hurry to off-Broadway's New World Stages to see Dane Biren as Franz in the hit musical Rock of Ages.