Steven Sater Talks Adapting Alice By Heart From Musical to YA Novel, the Future of the Show, and What's Actually Happening with the Spring Awakening Movie 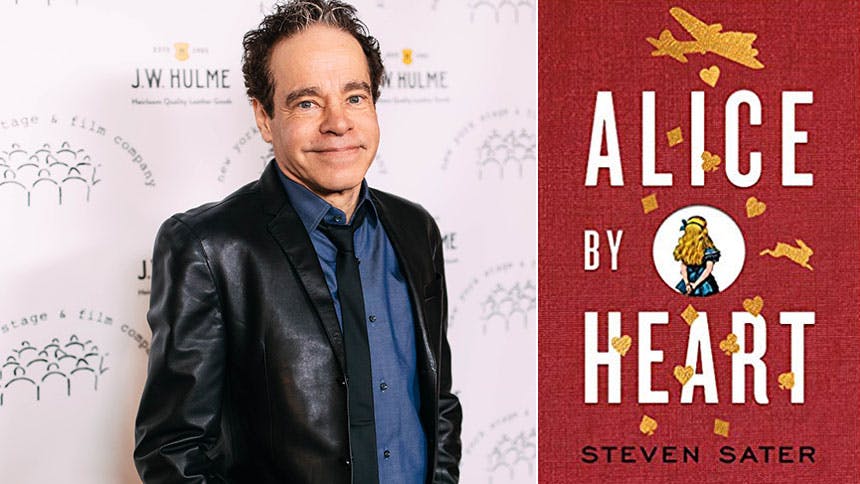 Steven Sater, best known to Broadway audiences for writing the book and lyrics to the Tony-winning Best Musical Spring Awakening, has adapted his much-loved off-Broadway musical Alice By Heart into a young adult novel published by Penguin-Random House/Razorbill. Alice By Heart is inspired by Lewis Carroll's Alice's Adventures in Wonderland, but this retelling has Alice living in a London tube station after the devastating Blitz of World War II. She and her best friend, Alfred, escape their difficult world and lose themselves in their favorite book, Alice's Adventures in Wonderland. The musical, which featured lyrics and a co-book by Sater, premiered in 2012 at London's National Theatre before making its 2019 New York debut at off-Broadway's MCC Theater.


BroadwayBox recently caught up with the two-time Tony Award winner to discuss his passion for literature, adapting Alice By Heart from musical to book, and the latest update on the Spring Awakening movie.

1. Why expand the story from musical to novel? What was it about Alice by Heart and this world that keeps you engaged and wanting to continue?
I'm very much a book person. Books have informed every aspect of my world. But when Kurt Deutsch first proposed to me that I create a book out of the show, I thought he was crazy. Then it really stayed with me. I thought, “Wow, to create a book about a book and a book about what books have meant to me.”

So, it really had to do with affirming that power of a story and what a book can mean to you, and also how a book can stay with you through your life. A book in childhood means one thing, but as you leave childhood behind, you can leave the book behind but you can also take it with you and look at its lessons in a different way. So, that was kind of the impotence.


2. As an avid reader, which book do you think you've read the greatest number of times in your lifetime? What speaks to you about that particular book?
Well, I'm going to give weird answers because I'm going to give truthful answers. So, I'm going to tell you three books that I've read throughout my life. All these books have really mattered a lot. One is The Iliad, which first taught me about the common humanity and sorrow. I learned ancient Greek, and then The Iliad transformed my life. The next book is Paradise Lost by Milton, which is the poem that most rocks my world. The power of how syntax can carry emotion—how thought can bear forward all our deepest sort of longings and yearnings and our desire for paradise in our lives. And then last—and I know I'm giving you really heady answers—is certainly is Proust. And that's what I thought at first, ‘cause that's where I've been living for the past year. I have read the seven volumes of Proust so many times I've lost track. I spent the past year rereading him, and now I can't let go of it.

Susan Sontag, who is kind of a mentor to me, said that any book worth reading is worth rereading. If a book's not worth rereading, it's not worth reading it in the first place. I am a constant rereader. When I reread, I take things in more and more deeply. If you think of the lyrics of Spring Awakening, for example, they are so imbued with the poetry that has meant so much to me for so many years—it's lived in me and I've known it by heart. Alice By Heart is a book about the power of knowing something by heart. When books, literature, and poetry become part of you, it becomes part of how you live your life—they inform your heart and mind.

3. As someone for whom books mean so much, what do you hope the young reader experiences reading Alice By Heart?
That you can depend on yourself; that you can develop your own inwardness; and you can find in yourself the strength to get through loss and grief and the painful partings which are just part of life. For the eight years we were working on the show—and we're still working on the show, by the way—I carry this piece of paper I'd written on a yellow note pad which said, “This is to ignite the sense of wonder in displaced souls around the world.” I was thinking of all these people living in encampments and shelters around the world, and Alice, in a sense, is living in a tube station. How do you summon in a whole beautiful world out of yourself? So, my hope for the book would be to instill a sense of wonder.


4. You mentioned that you are still working on the musical Alice by Heart. What is the future of that show? Are there productions in the works?
What's happening is we've all been very busy. We've all been very consumed with other projects. My fondest hope is that we will continue to develop that—and I think we will. There's a couple of opportunities to go back to work on the show and that work leading into another production of the show. So that's what I hope, that we can go back to work on it and we can have another production, and then that production can perhaps come to New York and the show can have an ongoing life. And I think it may, particularly if we get it right.


5. The show’s off-Broadway cast recording seems to have really connected with young fans.
Yeah. It's been very encouraging. I was never on social media. I joined nine or 10 months ago because of the book, and it's amazing the outpouring of love—that people are such fans of the show and of the soundtrack. That's how people are learning about the show. And I think now the book can help with that too.


6. Let’s talk about Spring Awakening for a moment. I am on IMDB right now, and it has fans very excited for this alleged movie. The site claims the film is in pre-production for 2023 with the screenplay by you and directed by you. Then it has three actor names attached. What can you confirm or deny about what's on this site for the Spring Awakening movie?
I can deny all of it. It's all a fabrication that was come up with by a young actor, I believe, who wanted to bring attention to himself. I'm sorry to disappoint fans.

But what I can tell you at the same time is that the Spring Awakening movie may genuinely be coming together. Through the years, I've said a couple times, “Spring Awakening seems to be coming together,” but I only said it when it was true. So, I'm saying it again—and I'm aware that it may not come to be. However, I will say I'm in meetings, and it's closer than it has been, and I really think we're at a moment that it really could come together.


7. Finally, what's the last good book you've read?
I am actually in the midst of reading Satantango by Laszlo Kransznahorkai. I know it’s a long name — but maybe it's good for people to know about the book. Amazing writer!