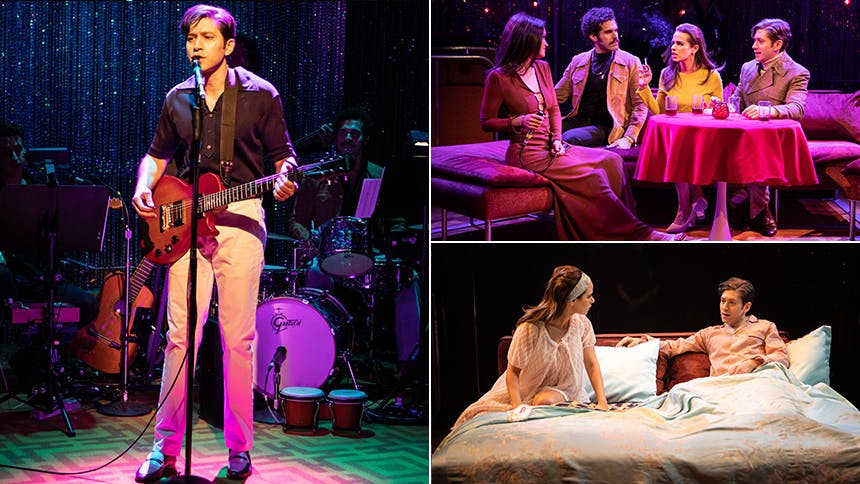 . Michael (best known to TV audiences as Joel Maisel on the Emmy-winning comedy The Marvelous Mrs. Maisel) plays Ted, a married dad in 1969 looking to shake things up a bit and become more like their sexually liberated friends Bob & Carol. The New Group production runs off-Broadway at the Signature Center on 42nd Street through March 22, 2020.

BroadwayBox recently spoke with Michael about stepping out of his comfort zone and returning to the stage in a new musical, getting buff for Broadway, and meeting Mrs. Maisel fans around the world who want Joel and Midge back together.

1. What was it about this adaptation that lured you back to the stage? How did you know this was the project for you?
Well, first off, I had worked with Scott Elliott and The New Group before, so I knew I was in good hands. That, combined with Duncan Sheik's music, and Jonathan Marc Sherman's writing, made it a no-brainer. I saw Spring Awakening four times, so I was definitely already a fan. Most importantly though, I saw it as a challenge. I hadn't done a musical since high school, and never thought I'd do one again...but as an actor, I think it's important to test your boundaries and try things out of your comfort zone.  It can only make you stronger and more confident, and this certainly has.


2. You've previously won over New York audiences in two high-profile productions, the off-Broadway comedy Bad Jews and Ivo von Hove’s Broadway revival of A View from the Bridge.  How would you compare those experiences? What were they like for you?
Completely different experiences, but both amazing.  Bad Jews was lightning in a bottle—amazing cast and writing. And the laughs we got from our incredible audiences were just so much fun. Not to mention, I originated a character that has been acted all over the world!  So cool.

And being a part of A View From The Bridge was literally a dream come true. Broadway was always the goal, and to have my debut in a play this special was more than I ever could've hoped for. I actually initially passed on the audition because I didn't think I was right for it (in the play, they keep talking about how big and strong Marco is). Needless to say, when I got the part, I immediately hit the gym and gained 8lbs of muscle. Not gonna lie, I looked pretty good!

3. What’s been your favorite Mrs. Maisel scene that audiences have never seen because it got cut?
I don't believe any of my scenes have been cut out completely, but the one at the end of Season 2 where I'm hitting baseballs was actually a bit longer.  And it was all filmed in one take!

4. Where is the most random or weird place you’ve been recognized since the success of Mrs. Maisel? What do fans most often want to talk with you about?
This past October, I was hanging at a bar in Madrid, and the bartender asked, in a thick Spanish accent, "Excuse me, are you 'Mr. Maishel.'"  So yeah, drinks were free that night.

As far as what fans want to talk about...it's typically whether Joel and Midge will get back together, and I'm always surprised when they push for it to happen.

5. What’s been the latest TV show, movie, or play that you’ve been really obsessed with? What spoke to you about it?
Everyone needs to watch Shtisel on Netflix.  It's about an Orthodox Jewish family living in Jerusalem, and the acting, writing, and cinematography make it one of the best shows streaming right now.  It's absolutely beautiful.

Bob & Carol & Ted & Alice
Best Priced Tickets
Newer
Get a Look at Off-Broadway’s New Immersive Ghost Story The Woman in Black
Older
Luba Mason Takes on Seven Questions About Girl From The North Country, Her Cabaret Career, & That Iconic '95 Revival of How To Succeed