For Liza Minnelli's 74th Birthday, We Revisit Her Iconic '74 Concert at the Winter Garden Theatre 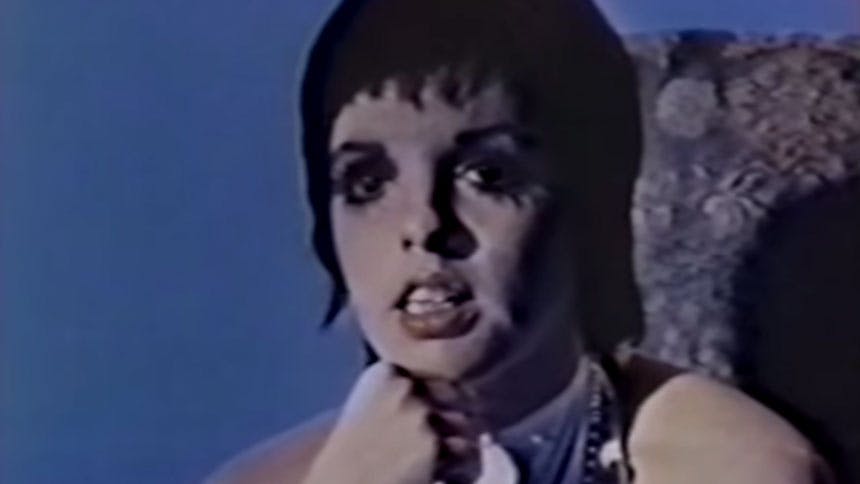 The production had an all-star creative team with direction by Bob Fosse, choreography by Fosse and Ron Lewis, an orchestra conducted by Jack French, with musical coordinator Marvin Hamlisch. Minnelli was bestowed a Tony Award in 1974 for “adding lustre to the Broadway season” with this production.

At 27 years old, Liza Minnelli performed a midnight show on Friday January 25th, the night before the production’s closing, as a special benefit for The Actors Fund. That special performance had been preserved in black and white by the New York Public Library.

As there is no footage on the internet of Liza’s incredible Winter Garden run, we wanted to take our readers through what the night was like revisiting this specially preserved film recording.


The orchestra began silhouetted. When the overture got to “Maybe This Time” the lights got brighter. At the end, Liza ran onstage with a long scarf draped across her shoulder.


Yes, she does the sassy looking up choreo on the beat before “that handsome stranger you long to meet” 2:16 in.


Standing still at her microphone center stage, she delivered powerhouse vocals throughout the song and we were only three songs in.

Liza With A Z


Before launching into “Liza with a Z,” Liza shared a story about performing at the Riviera in Las Vegas at the same time Elvis was performing on The Strip. She went to see him on opening night calling him “a vision in white, lot of spangles!” He had some difficulty saying her name while introducing her to the opening night crowd—which led into a lesson to the Winter Garden Theatre audience on how to spell & say her name.


This novelty number really let Liza show her comedic chops impersonating her fans who approached her confessing they were exactly like her. Kander and Ebb for the win again.

If You Could Read My Mind / Come Back To Me


The medley we deserve combining a Gordon Lightfoot pop song from the era with a standard for the Broadway stage in 1974.

It Was A Good Time


This was NOT the Liza with a Z “It Was A Good Time” which is why we chose this video, which was closer to the Broadway performance. This song was one of the true highlights of the entire evening. Her acting during this iconic story song was bigger and better than ever. The orchestra build up during the final chorus was brassy, with an even larger wind up starting with the final “since you’ve gone and won’t be mine again...” starting at 4:15. This time stamp to the end is heart eyes all around. Enjoy the magic of that tempo change.

I’m One Of The Smart Ones


Kander & Ebb – how they can write a character number! Before her big dance numbers, Liza had one more Kander & Ebb gem to sing. Strutting around the stage with all of her Liza confidence she lamented that no one can hold her back from living the life she has all figured out. And that ending – “ain’t she flyin’ high!”


Donning her “I Gotcha” dress, Liza is joined by Pamela Barlow and Sharon Wylie for some fun choreo and all around sass.


Recreating this showstopper from “Liza with a Z,” Liza was joined by Spencer Henderson and Jimmy Roddy for this iconic Fosse number. Spencer had appeared with Liza in the aforementioned television special.


Grabbing a big towel to dry her hair, Liza threw on her black sequined Shirley glasses to perform this Kander & Ebb classic with her four dynamic dancers – bells and all!


The orchestra began a special percussion based Entr’acte with iconic Fosse snaps and syncopation led by the ensemble. Wearing a cardigan and white button-down shirt with a ribbon bow tie—she threw her white gloves offstage before launching into two ballads.


Orchestrated with a different groove, Liza treated audiences to her beautiful number from Flora The Red Menace.

Anywhere You Are / I Believe You


Sitting on a stool, Liza sang this medley of Kander & Ebb tunes so simply with such passion and heart.

There Is A Time (Le Temps)


Liza shared a story how Fred Ebb, with his French/English dictionary, helped with an English translation of this song by one of Liza’s favorite composers, Charles Aznavour. She delivered the number with such eagerness and fierceness. This video started out with a slower rendition of the song but in true Liza fashion picks up to a hurricane of amazing vocals much like that night at the Winter Garden.


Liza has said in the past how she develops a character for each of the songs she performs. This song made famous by Edith Piaf is no exception. She picked up a small silk purse from the stage floor and sang the story of the “girls of the night” swinging her small purse in a circle on the song’s chorus. It was a haunting number but no one tells a story like Liza.

And I In My Chair (Et Moi Dans Mon Coin)


Speaking of character numbers and telling a story–this one is and will always be legendary. A huge chair is brought out on stage for Liza to sing in during this Charles Aznavour number. She’s Janet and she brought her husband Bill to a lovely party. Watch out Christina, Janet’s on to you.


I mean. Before the final chorus where she did her knee drag choreography (2:39), at this midnight performance she yelled “oh why not!” before the final “I’d walk a million miles…”

I Can See Clearly Now


Before the start of the number, Liza screamed out “Fred, I can’t help it– I need a drink of water!” One can only assume to dear Fred Ebb. It was then “time for the old tambourine number.” Rejoined by her ensemble, Liza performed an effervescent rendition of this Johnny Nash classic. It was truly one of the most fun numbers of the night.


Taking a seat on a stool by the piano, the instantly recognizable vamp began from her Cabaret torch song. On the key change, she walked center stage with her microphone to deliver a powerhouse ending.


The song the crowd had been waiting for. A few years fresh from the film and her Oscar win, this song brought the house down as she ended with a flurry of kicks and pure joy across the stage. The crowd was on their feet cheering before the final verse of the number even started.

Following the show, Clive Barnes came onstage to bestow Liza an honor for her legendary run at the Winter Garden and as the highest grossing event for The Actors Fund thus far.

Liza quipped, “I’d like to make just one more little piece of history and make it probably the first time a performer has kissed a critic.” After kissing Clive Barnes, he said to the audience, “Eat your heart out Brooks Atkinson!”

Liza launched into another encore of “Cabaret” starting at “I made my mind up back in Chelsea…” with an electric “when I go, I’m going like Elsie!”

At the end of the night she joyfully screamed, “You’re all great—I love you!” blowing a kiss to the audience on a night that was one for the Broadway history books.