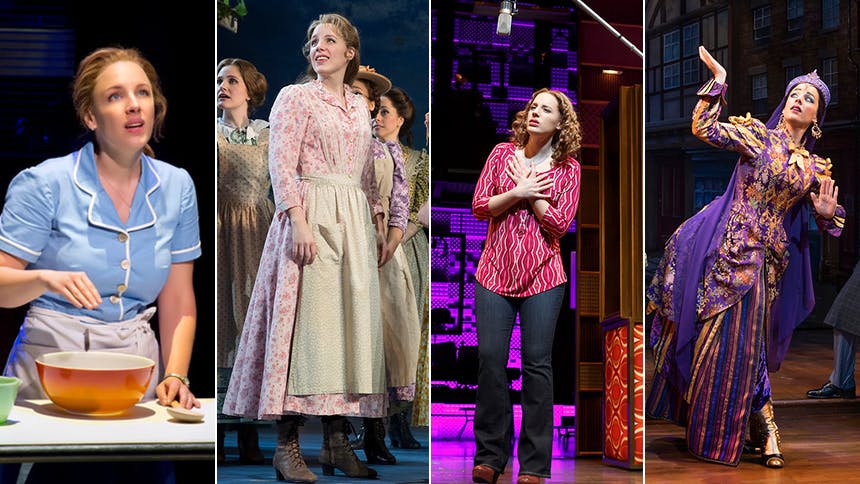 Tony Award winner Jessie Mueller is the one of the most acclaimed musical theater stars of her generation, and now she makes her non-musical Broadway debut as Ms. Johnson in Tracy Letts’ dark comedy The Minutes

. Directed by Anna D. Shapiro (who also helmed Letts’ August: Osage County), The Minutes takes place over the course of a single meeting of the Big Cherry city council where major secrets come to light, and features an ensemble cast mostly made up of Lett’s vets and Steppenwolf favorites.


This Thursday, we’re throwing it back and looking at Jessie Mueller’s career one YouTube clip at a time leading up to her star turn in The Minutes.


She made a name for herself in Chicago starring in nearly 20 plays and musicals. In 2011, she won the Jeff Award for her performance as Amalia Balash in the Writers Theatre production of She Loves Me.

The Chicago actress was then discovered by Michael Mayer for his revival of On a Clear Day You Can See Forever. She made a breakout Broadway debut as jazz singer Melinda Wells. Her “Ev'ry Night at Seven” stopped the show nightly, and she earned her a Theatre World Award and her first Tony nomination despite the show’s brief run.


That summer, Jessie went into the park to do Into the Woods. She appeared as Cinderella in The Public Theater’s Shakespeare In the Park production.


Jessie returned to Broadway the following season in 2012 as Helena Landless/Miss Janet Conover in the first Broadway revival of the Tony-winning musical The Mystery of Edwin Drood. She received a Drama Desk Award nomination for her featured performance in the Roundabout production.


After the limited run ended in March 2013, she took over the leading role of Billie Bendix in Nice Work If You Can Get It from Kelli O’Hara.


In 2013, she also co-starred with Kelli O’Hara in the New York Philharmonic production of Carousel, which was broadcast on PBS. Jessie played Carrie Pipperidge to Kelli’s Julie Jordan.


Next came Jessie’s big Tony Award-winning star turn as music legend Carole King in the Broadway bio-musical Beautiful: The Carole King Musical. After originating the role in the San Francisco premiere, she opened the show on Broadway in January 2014, and picked up the Tony Award, Drama Desk Award, and a Grammy.

In 2015, Jessie originated the role of Jenna in Sara Bareilles’ musical adaptation of the film Waitress at Boston’s ART. Her “She Used to Be Mine” became instantly iconic. Jessie opened the show on Broadway in 2016, receiving a Drama Desk and Tony Award nomination for her performance.


After the smashing success of Waitress, Jessie returned to Rodgers and Hammerstein’s Carousel, this time graduating from Carrie to Julie Jordan in the latest Broadway revival directed by Jack O’Brien. For her assured and moving performance, Jessie won the 2018 Drama Desk Award and was the first Julie Joran in history to be nominated for a Tony Award.


After Carousel, Jessie co-starred as Marian Paroo opposite Norm Lewis’s Harold Hill in the Kennedy Center’s 2019 production of The Music Man.