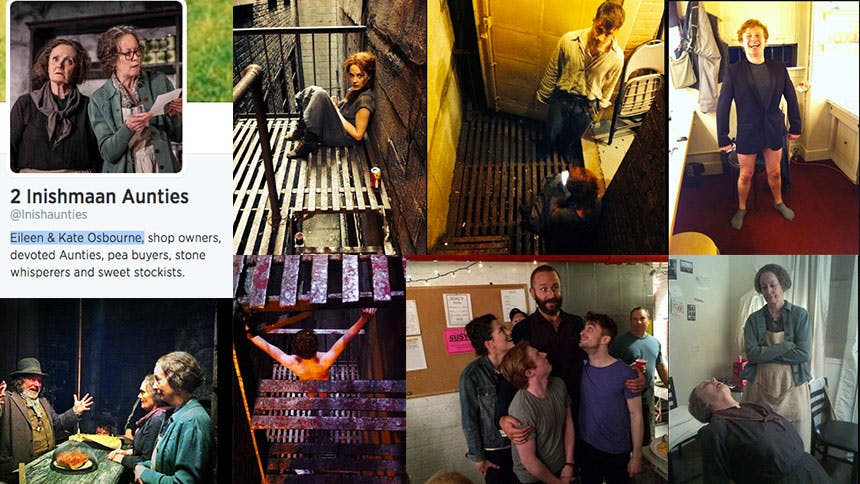 It’s the final week to see the top-rate, Tony-nominated comedy The Cripple of Inishmaan at Broadway’s Cort Theatre, and that makes us pretty sad.

What makes us sadder is that the genius Twitter account @InishAunties is also coming to an end. The handle refers to the play’s characters Eileen & Kate Osbourne (played brilliantly by Gillian Hanna and Ingrid Craigie), two Irish sisters who own a shop and care for their crippled nephew Billy (headliner Daniel Radcliffe).

Below BroadwayBox looks back on 12 stellar posts of backstage shenanigans you’d only see if you’ve been following the Aunties on Twitter. [And kudos to the photographer(s)]

"Bartley in the sweetie box"

"We went to the Of Mice and men lunch today to size up to them. We came up a bit Shortt"

"Bartley is off to the Tony's"

"Kate is trying to get Bartley in off the fire escape. He's complaining of the NY humidity."

"Baby Bobby opens a beauty Salon on the island. The ladies take advantage of it."

"When Billy is not looking at cows he likes to sit with Helen and Bartley on the Fire escape."

Don't miss your chance to see this colorful cast of characters live in The Cripple of Inishmaan at the Cort Theatre, through July 20 only!