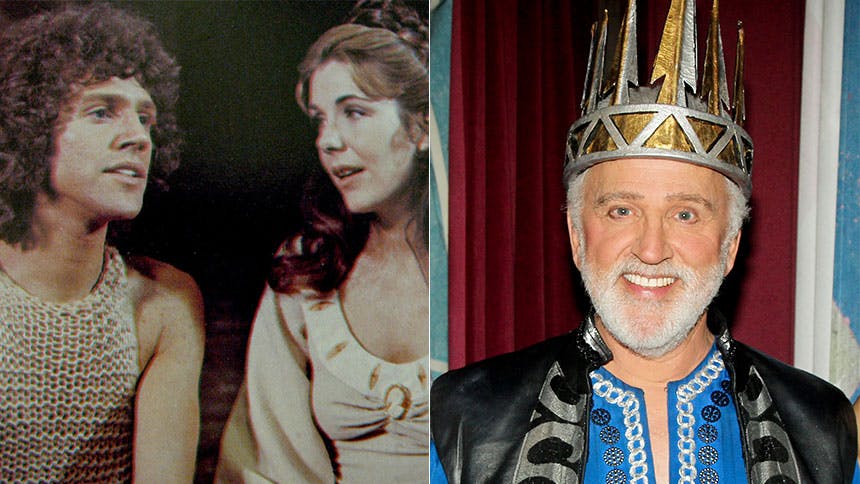 Before John Rubinstein won a Tony Award for his performance in Children of a Lesser God, he was a fresh-faced young actor making his Broadway debut in the title role of Bob Fosse’s new musical Pippin. And now, 42 years, later the 1973 Theatre World Award winner returns to Pippin as King Charles, Pippin’s father. BroadwayBox caught up with Rubinstein to hear from someone who was part of Pippin’s initial creation about the five moments in Diane Paulus’ Tony-winning revival that really blow his mind.

1. “Pippin Sings High Notes That I Never Even Touched.”


“There certainly are tremendous differences, which is of course what is fun about it. Kyle Dean has to go through so much more stuff than I did, so I have a mixture of admiration and a little wave of relief I didn't have to do all that stuff myself. One of the new things is they made Pippin sing much more high notes. I sang a high C but I sang it falsetto. He sings a high B at some point with his normal voice, and it’s amazing.”

2. The Showstopper ‘No Time At All’


“You can argue it's the biggest showstopper of the evening when Grandma strips off her dress and is revealed wearing this little showgirl outfit, and clamors up to the trapeze where this giant man holds her by the ankles as she’s singing. That is quite different than old Irene Ryan, who was well into her eighties, conducting a sing along. She did some hoofing and five or six boys carried her round, and it also stopped our show but it’s different. It’s spectacular in both guises, but this one is spectacular in a circus kind of way, and ours was spectacular in simply a geriatric kind of way.”


“I first saw this ending about 12 years ago in a production in Seattle. Our ending was just the three of us standing there, we spoke and I lifted their hands, and it was modest. I compare it to the end of the film The Graduate, where Dustin Hoffman and Katharine Ross are sitting there in the back of the bus after they've defeated the powers that worked against them throughout the whole movie; now they are finally together, they got what they wanted and they are staring vacantly ahead saying, ‘Now what?’ And that was sort of the end of Pippin—having gone through trials and tribulations and love affairs, he finally defeats those powers of darkness and looks ahead and says, ‘I don't know what’s coming but I’m ok with it because the three of us together have a strength and we can meet our future.’ So when I sat there in Seattle and saw Pippin and Catherine walk away and little Theo running back on stage to sing a snippet of ‘Corner of the Sky’ and then here come all the players (all the bad guys), I was outraged.

It really is like seeing a different translation or staging. If I had seen it as an audience member I’d say, ‘Oh, that's what this show is about. No matter who does what in this world, who learns a lesson, there’s always another coming around the pike who is going to go for the brass ring and be corrupted.’ But for me, having lived it for so long, that’s not what this play was about. It was about defeating those powers—about not achieving the huge spectacular accomplishment that the kid wants when he sets out, but at the end having taken a journey to a place where he can stand there holding a woman he’s not sure he loves and a little boy he’s not sure he knows how to be dad to, but clinging to them saying, ‘Let’s the three of us make a go of it.’

And when I was doing Wicked in LA, I saw Stephen Schwartz and I said, ‘What did you do to Pippin?’ And he said, ‘Oh John, you’re so sentimental. This is the right ending; this is how it always should have been.’ And I had a long talk with Diane Paulus, and she was very eloquent and convincing in describing her artistic take on the ending and as a show, and I buy it. I stand there on stage every night as one of the players to pull in little Theo; and as the lights go out on all of us, the audience screams with enthusiasm and exaltation.”


“It’s not too much of a spoiler to say Charlemagne is assassinated and resurrected; and the way we did that in the old company was very, very modest magically, and here, my killing and resurrection are both done with magic tricks that make them visually very exciting. I’m just tickled to do them that way. I did them the other way, and they were always a little tacky—this little traveling company that didn't have the effects—but this one is done with a big flair. I love that.”


“I like in this production the Catherine character is a clown in the company. Our Catherine, Jill Clayburgh, was not in the opening number or included in any of the rest of the show, but this Catherine is one of the players. She very charmingly plays this clown with her little boy near by, and I think it's a wonderful addition to the show. It sets up better when she is ‘playing Catherine’ and deviates from the script and gets chastised by the Leading Player. I think it’s a big improvement; it’s more a part of the concept of this troupe of players.”

You have until August 17 to see Broadway’s original Pippin, John Rubinstein, beside Broadway’s current Pippin, Kyle Dean Massey, in the Tony-winning 'Pippin.'