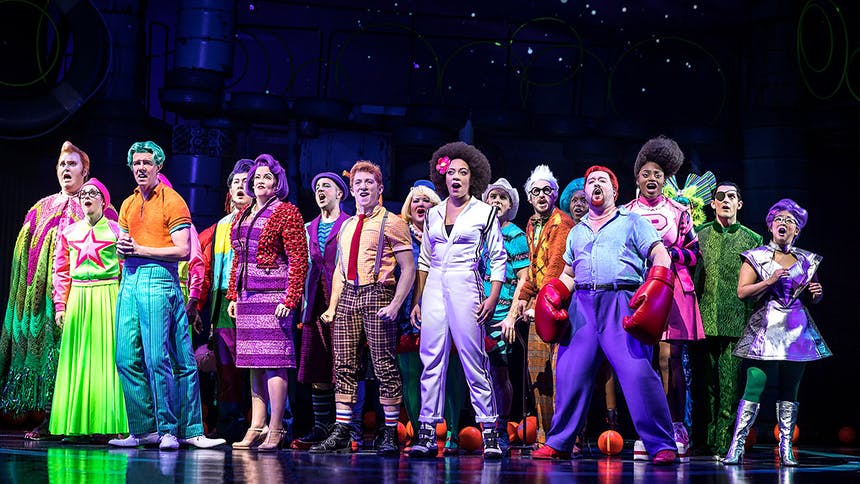 SpongeBob SquarePants, the most Tony-nominated show of the year and our favorite new musical of 2017, will play its final performance September 16, and that’s a total heartbreak. Here are five reasons you MUST get yourself over the Palace Theatre to see this critically-acclaimed musical while you still can.


In The New York Times review, Ethan Slater's titular performance as SpongeBob was compared to Joel Grey in Cabaret & Carol Channing in Hello, Dolly!. He went on to win the Drama Desk, Theatre World, and Outer Critics Circle Award for his debut performance on Broadway. Two years ago, Cynthia Erivo stunned NYC with her Tony-winning debut as Celie in The Color Purple; then last year we got Ben Platt and his epic performance in Evan Hansen; and this year it’s all about Ethan in SpongeBob—only he’s not crying and singing his face off, he’s jumping around, singing while upside down, and giving a hilarious and athletic three-dimensional performance as a determined sea sponge hoping to discover his self-worth in the face of a disaster. It is truly a star is born moment.


At every turn, SpongeBob and its director and creator Tina Landau surprise even the most jaded theatre-goer with the show's creativity. Beyond the initial conversation of explaining to people he’s not in a big square costume, how do you convey the originality of Kyle Jarrow’s book, the genius of using those yellow sponges in “Simple Sponge”, the way Michael Dobson’s live sound effects are incorporated into the show, or the found objects that populate David Zinn’s Tony-winning set design? You can rent a lot of the films on Broadway and get a sense of what you’ll see on stage, but no episode of the iconic Nickelodeon series prepares you for the theatricality and originality of this stage musical. Anyone who dreams of creating theatre should hurry to the Palace Theatre to see just how limitless theatre can be when you think outside the box.


Initially when you hear that each song was written by a different music legend or Grammy winner, you think, oh gee…how is this going to be cohesive in any way? But my gosh, did they create something special. There are so many genuine bops in this score! Turns out when you’re writing about zany under the sea characters trying to save the world, there are no bounds on what a musical number can do or sound like. That opening number is the most joyful opening of a musical since Hairspray; “Chop to the Top” and “Hero Is My Middle Name” are songs you can throw on at any summer pool party and live your best life; and “Simple Sponge” is going to be performed at senior recitals and cabarets for YEARS to come.

The featured cast of SpongeBob is so impressive. In tone, everyone is on the same page and giving this show a 110% of themselves. It’s common to go to a show, and for one, maybe two featured players to steal a moment, but in this show, everyone has a moment and all of them nail it! Legit jaw-dropping moments from Wes Taylor’s rap to Gavin Lee’s tap, when Jai’Len Josey brings the house down with her vocals, or any scene where Lilli Cooper & Danny Skinner are the dream team of BFFs. It’s tens across the board.

I know a lot of times the Broadway musicals that began as cartoons like to say that they are actually for adults—we are a great date night show, or it’s not all about the kids—and sometimes that is met with a giant eye roll but not here. This is actually a show adults could love and enjoy, especially during these hot summer months in NYC. Having never seen an episode of the cartoon, I found the world of SpongeBob the musical to be just how I remember summer break as a kid—colorful, fun, silly, and over way faster than you hoped.