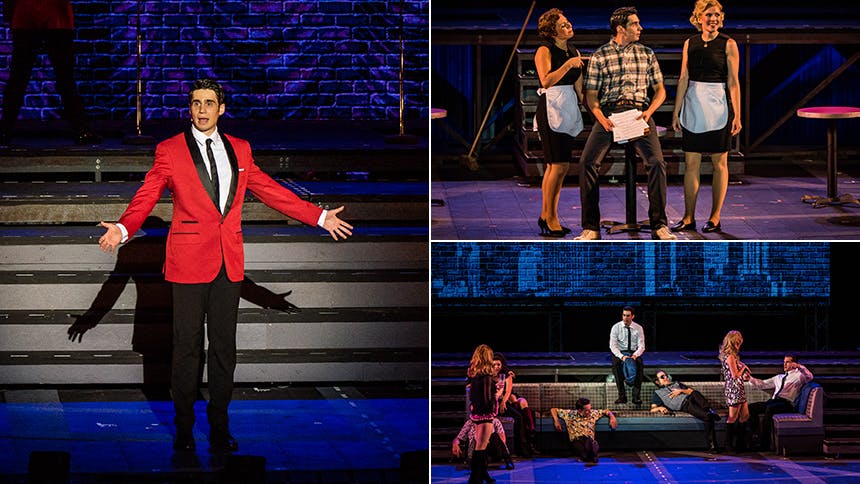 
BroadwayBox caught up with Bobby to talk about Jersey Boys, his time leading Broadway's A Bronx Tale, and why he's off social media.

1. What made you want to be a part of this production?
Jersey Boys was my dream show ever since I saw it when I was 16 years old. I had a giant, 7-inch growth spurt in high school and got too tall to be Frankie Valli, so I thought, great I could be Bob Gaudio—a tall Italian who can sing doo-wop music. “Cry for Me” was my 16 bars all throughout college. Then the Dodgers announced they were closing Jersey Boys a couple of months after I graduated college, and I was like, “Crap, I’ll never be able to do it!” So, when The Muny announced it, I wrote them and said, “If you don’t have someone for Bob, I’d love to throw my hat in the ring. It would make 16-year-old Bobby very, very happy.”

When I went to Muny open calls as a college kid, I would sing 16 bars of “Cry For Me”. I am very happy to be doing this. It’s a highly creative process. We are creating something from scratch. Josh Rhodes did an amazing job directing and choreographing it, and we all got to create something together and put our own ideas into what the show could be, especially when you have to fill an 11,000-seat outdoor theatre. You could make it much more of a rock concert. When we go into “Sherry” and “Big Girls Don’t Cry” we have these big turn tables, and we have to stop the monologues sometimes because the audience won’t stop applauding.

2. How have you changed as a performer since making your Muny debut as Enjolras in Les Miserables in 2013?
The great thing about The Muny because of this lack of time and the hyper-focus that is required to pull something of this scale off, everyone is forced to release a sense of ego and unconditionally extend trust toward every department. It reminds you why you got into the theatre in the first place. When I was a 20-year-old doing that, I was in college and it gave me a huge boost of confidence that my instincts as an actor were valid. You are forced to figure out what you have inside and where it takes you. When you go out into the world at large, I think it’s easy for a lot of ideas to be thrown out at you and you start to lose a bit of the sense in yourself because you’re now part of a larger mechanism of the show. So, coming back it has been a great lesson in retrusting your natural instincts as a performer and know that they are valid and worthy.

3. You made your Broadway debut leading A Bronx Tale, and now it's coming to a close this summer. What was your absolutely most cherished memory of that whole experience?
I just love those people I got to see every day walking through the doors. That cast, the crew members, the front of house staff, and the people we got to spend a year with. It became very apparent that this familial atmosphere was something very special. I was told by a lot of people over and over that it doesn’t exist very often, so I felt very grateful for that.

I also just loved the mishaps that would happen onstage and how people would have to respond. The best mishap story I had was that the whole premise of the show is this act of gun violence. One day, Nick Cordero went to go shoot and his live blanks didn’t go off—but that’s ok because we have a stagehand backstage who has a backup gun to shoot in case, but those blanks didn’t go off. I’m standing there as the narrator in the back thinking what’s going to happen. Nick tries the trigger a bunch of times, realizes it’s not working, puts the gun behind his back, and goes over and Vulcan nerve pinches the guy to death. We were all just left gobsmacked. This whole thing that is the predication of how the show works had to shift and you watch an amazing actor like Nick Cordero take it by the balls and figure it out. I miss those people and those moments.

4. You are off social media. What prompted that change, and do you feel more free and present now without it?
It’s just a personal decision for me. I see how it’s a remarkable tool to promote yourself and simply express yourself, but I’m someone who likes a certain amount of privacy in my life, and it became something I noticed I was doing on a daily basis. I was sharing so much of myself that it almost started to feel like a job. I thought, this can’t be another thing that causes stress and anxiety and a sense of FOMO and paranoia in my life. Since simply taking a step back, I’ve been able to find a healthier standing and better relationships with my friends. It’s not forever, but, for this time, it’s been very helpful and lovely.

5. Bob Gaudio's big Jersey Boys moment "December, 1963 (Oh, What a Night)" is all about a first time, but these quick questions are all about your last time.
Last great book: I reread The Inner Game of Tennis, which is my favorite book. I’m a big tennis player, but I find it’s about life and being present in the moment.
Last TV show you binge-watched: The documentary series Wild Wild Country on Netflix, and I’m starting The Staircase right now.
Last album you were obsessed with: The newest Jukebox the Ghost album called Off to the Races.
Last great stage performance you saw: One of last things I saw before I left New York was Once On This Island....for the third time.
Last thing you purchased for yourself online: A steamer. [Laughs]

If you can train, plane, or automobile over, don't miss Bobby Conte Thornton in 'Jersey Boys' at The Muny through July 16.