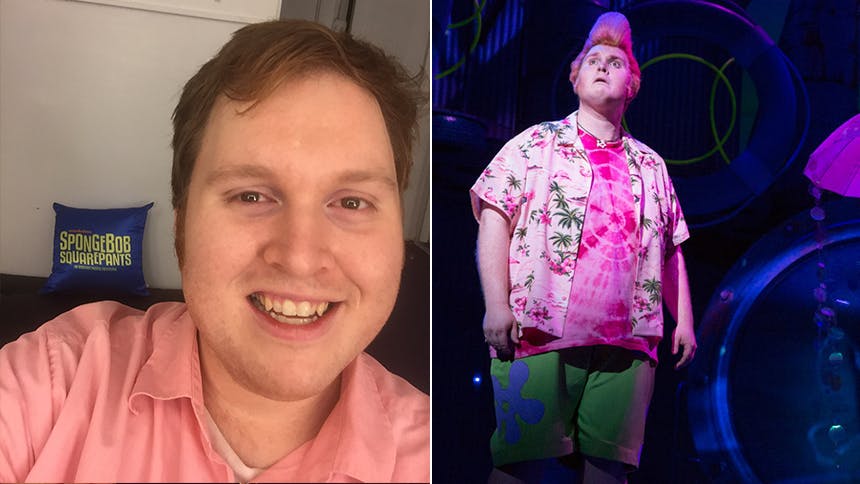 . Danny originated the role in the Chicago premiere and now comes to Broadway as the lovable starfish.

BroadwayBox gets to know Danny better as we talk about bringing Patrick to life onstage, how his love of theatre began, and the Nickelodeon show of his childhood dreams.

1. How did SpongeBob happen for you? What was your audition process like:
SpongeBob has definitely been a process. It started for me five years ago when it was still called the "Untitled Tina Landau Project" and the characters had code names. It wasn't until I received a phone call from the casting director that I knew I was going in for Patrick. I had a few auditions and each time I did both a scene from the television show and had to prepare some physical comedy bits. I was asked to try to put on a shoe but continue to fail. And then I had to create my own bit which I decided to do as a really lonely guy at a dance. He continues to try to work up the courage to dance with people and is constantly rejected. It was a lot of fun.

3. What’s been the most fun/informative day of rehearsal with Tina Landau:
The most fun day of each rehearsal process has been the day right before we start working on the script proper. We get to play around with games and props to try and discover potential answers to challenging moments in the show. We explore physical vocabulary and behavior that we can begin to utilize. Tina creates an atmosphere that encourages playfulness and creativity. There is nothing more fun than a room full of actors truly playing around with each other.

4. If you could have dinner with only one artist who contributed to the SpongeBob score, who would you choose:
Oh this is hard! I would have loved to have gotten to meet David Bowie. He had such an impact on me growing up. But I think I would love to have dinner with Yolanda Adams. She is divine both onstage and off. When I first found out she was writing a song for the show, and that I was going to get to sing it, I reacted like a little child. I squealed with delight. Her songs are some of my all time favorites. Not only that but she is also just the kindest, most generous person.

5. What’s been the biggest pinch me moment of your SpongeBob experience so far:
Opening night in Chicago. The energy of that night was remarkable. It was the culmination of years of work and dedication by so many brilliant artists. After years of developmental workshops, it was thrilling to finally have a show. I have a feeling opening night on Broadway may become the next pinch me moment.

6. Who are you comedy heroes? What movie can always make you laugh:
My comedy heroes are Oliver Hardy, Steve Martin, and John Candy. They are a huge reason I have pursued this crazy career. Laurel and Hardy play so seamlessly with each other and there is never a moment unfilled. It's inspiring. Steve Martin is a genius. I would listen to his comedy albums on repeat and his book Born Standing Up is a treasure. If I started listing my favorite Steve Martin movies, I would just be listing his whole filmography. My entire heart belongs to John Candy though. He was not only hilarious but he was a beautiful actor. The funny he brought was always layered in genuine, warm emotion. The movie that I continue to return to multiple times in a year is Planes, Trains, and Automobiles. It never fails to make me laugh and move me. That scene in the motel room. Perfection.

7. What was the moment you knew you wanted to perform? Was there an early role that set you on your path:
I remember exactly when I knew I wanted to perform. I was in first grade and our local church was doing a production of The Music Man that my father was involved with. I was sitting in the giant auditorium playing with my toys and they started rehearsing that opening number on the train. I stopped playing immediately and started watching with amazement at what was going on in front of me. They got to the "Wells Fargo Wagon" number and one of my friends got on stage and sang that number and I was green with envy. He was allowed to do that? I wanted to do that! I want to tell stories! That church put on productions of The Music Man, Fiddler on the Roof, Godspell, and Jesus Christ Superstar and with each production it became cemented in me that I wanted to be a part of that. It was settled.

8. What were three must-haves for your first Broadway dressing room:
Three must haves for me are my steamer, my air purifier, and my pink tea kettle.

9. What’s something you totally nerd out over that has nothing to do with musical theatre:
I nerd out over old B-horror movies. I own far too many and am always adding to my collection. I just love them so much. The more outlandish and melodramatic the better.

See Danny Skinner in his Broadway debut as Patrick in 'SpongeBob Squarepants' at the Palace Theatre.