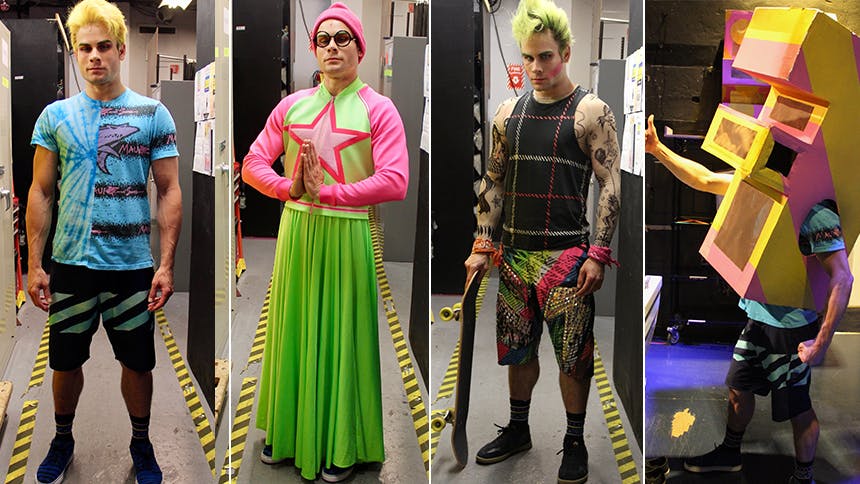 . The incredibly captivating Kyle began his journey with SpongeBoB as the skateboarding consultant for the Chicago production and now slays B'way audiences as a standout in the show's colorful cast of characters that inhabit Bikini Bottom.

Scroll on as Kyle shares with us some of his SpongeBob characters and their costumes created by Tony winner David Zinn.

I love that this costume blends various skate and surf brands—perfect for this skateboard dude. A couple of my outfits include skateboard shoes and this is one of them with a comfy pair of Nike SB kicks. For a very physical guy like myself, I need to wear clothes that I can move freely in and this costume hits the mark. I also perform other Bikini Bottom characters by adding different hats but letting that Bart Simpson hair fly in this basic costume feels so dope.

This costume is really fun to perform in but has been a learning experience for me. Our cast moves so quickly in the "Super Sea Star Savior" number that I had to learn how to calculate certain moves without accidentally stepping on the dress and slipping on the floor. I’ll admit, I’ve taken a few heavy slams learning how a dress moves with the body. Now that I’ve got the science down to dancing in this costume, I want to go skateboarding in it!

I love skateboarding on-stage in this outfit. The hardest part about getting in and out of this costume is that the tattoo sleeves are a tightly thin mesh material so once I get sweaty (99% of the show) it’s a total struggle. Some of David Zinn’s tattoo designs on this costume are so freaking rad they make me contemplate getting them for real on my own body. Hidden fact and not originally intended when designing this costume but, the bandana wrist bands on this costume have become wrist guards to me when I shred through various handstand skate tricks.

A dope combination of my Basic Fish outfit mixed with a giant pink and yellow F for the awesome "BFF" song. Learning movement with this giant letter costume is hard because of your limited vision but once you have learned the dynamics of balance and how to move freely it becomes way more fun. Dancing in this number with the other B and F letters is such a treat, and I love acting like a doofus in this costume when I’m not on.