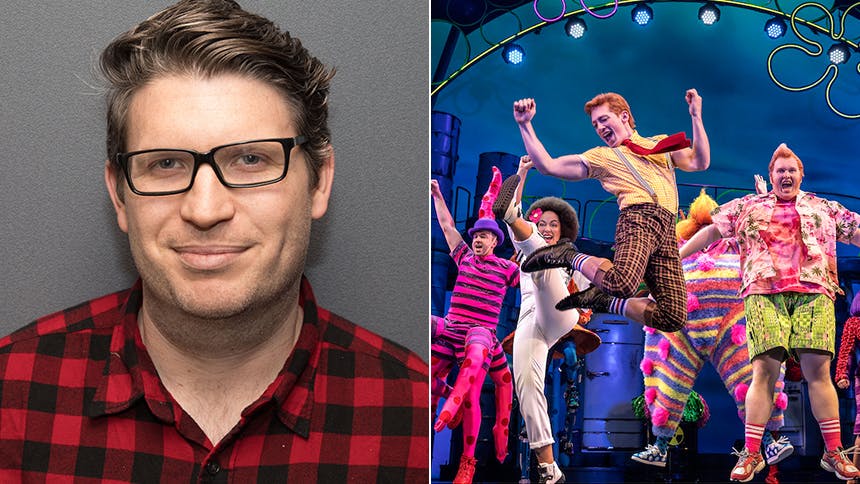 on Broadway (and everyone should!), you're probably already a fan of Michael Dobson. Mike is the foley artist, foley designer, and percussionist of the acclaimed new musical— playing all those incredible, perfectly-timed sound effects live and in plain view at the theatre.

Mike, along SpongeBob's sound designer Walter Trarbach, are jointly nominated for the 2018 Tony Award for Best Sound Design of a Musical.

Walter and I had fun picking up our nominee pins this morning. We both LOVE step and repeats. #tonyawards @spongebobbway


BroadwayBox chats with SpongeBob "super fan" Mike about his process working with director & creator Tina Landau, taking on this exciting project over six years, and staying present for new moments and opportunities each night.

1. How did becoming a foley artist first appear on your radar? What do you consider your big break?
It started first for me with an interest in old vaudeville and circus shows. Before recorded sound, shows relied on the percussionist to provide sound effects for the action happening on stage. A cow bell for a bonk on the head, or a siren whistle as something flew off stage. Moments like these were accompanied by a percussionist who had to watch and do live sound effects for the scene, while also playing drums in the orchestra. I was very taken with this technique and found myself working with lots of dancers, clowns, physical actors, and acrobats to see what was possible and how specifically connected we could make the movement and the sound.

My big break call was when Tina Landau asked me about the first SpongeBob workshop in 2012. It's been a whirlwind dream job over the course of six years as we developed the show.

2. You worked with director Tina Landau on Old Hats off-Broadway before SpongeBob. When she approached you about this project, what scared you about it at first and what excited you most?
It was actually the first SpongeBob workshop where we met. Then, over the years of SpongeBob's development, we did three productions of Old Hats together and I was her assistant for the Charles Mee play, Big Love. Every experience working with Tina has been a gift and also extremely influential.

I went into the first day at SpongeBob assuming it would be amazing. I'm a life-long SpongeBob super fan, so I was most excited just to be a part of it. At that point, it wasn't a show yet. It was a movement lab with a bunch of actors, dancers, clowns, and designers. Tina assembled this collection of ingredients that she was interested in and basically had us all play around for two weeks. When we finished, we had no idea if there would ever be a show, but we were all blown away by what we'd just been a part of.

3. What was your process like discovering the sounds of SpongeBob on Broadway? I imagine it was super collaborative with Tina and the actors. Does it still evolve or is it very set?
The rehearsal room for SpongeBob was consistently the most fun, creative, open, and supportive of places. It's been incredibly collaborative with Tina, the actors, the whole design team, and especially Walter Trarbach, the sound designer. Having me, with all of my sound effects, in the rehearsal room for the whole development process was a huge part of it. Some sounds developed slowly over the years and other things happened quickly one day on a whim and have barely changed. Because there was a constant spirit of play in the room, there were always new ideas popping up, and there were always crazy genius minds around to bounce new ideas off of.

At this point, big picture things are set but with a normal amount of breathing and variation from night to night. The subtle changes require me to always be present with the actors and never assume it will be the same timing from last night. For example, I play a lot of footsteps in the show. The iconic squeak of SpongeBob's walk and the suction pop sound for each of Squidward's tentacle steps. Each step gets a sound, and we never talk about the number of steps they will take. So, some nights Squidward (played by the amazing Gavin Lee!) might take 10 extra steps to cross the stage, and he'll pause differently between steps. Those kinds of differences are happening every night throughout the show. If every footstep was "set," or if they were worrying about me keeping up, it would really impede the spontaneity of their performances.

4. What advice would you give to aspiring foley artists? What are three things they can do to begin on this path?
I think that live foley in theater is full of exciting potential that we are just beginning to see and hear. I would love to see more people doing it. My approach is a combination of sound and percussion that made sense to me. But, I think there are a lot of other ways to arrive at foley. My three pieces of advice would be:

1. Find or create opportunities to do it. Get in a room with dancers, actors, clowns, aerialists, acrobats, jugglers, and anyone else who is interested. A foley artist is an accompanist, so a big part of it is to find people to accompany. Then, hope that one of them is a good fit for you. When you do find a good match, keep working with them.

2. Develop a very high accuracy rate. Using live foley is something that complicates the normal show system of the stage manager calling cues. This normal system is very reliable and safe. For any director, stage manager, or producer to get excited about foley, they have to believe that the foley artist will be consistent and that the show can depend on them every night. The more involved the foley is, the more this is true.

3. Be open and flexible. Whatever your idea is, don't rule out the other possibilities. Part of the beauty of working in theater is the combination of so many different people, ideas, disciplines, and personalities working together. It gets very hard if you are precious about your individual ideas or your personal experience. It requires constant adjustments, negotiations, meeting halfway, and the ability to throw away 10 good ideas to find a great idea. It is all about giving yourself and your ideas and striving to serve the bigger vision.