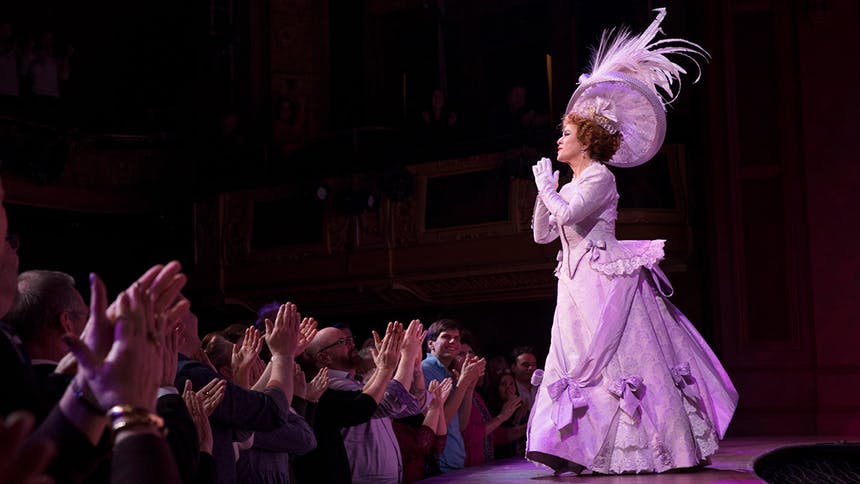 Time is quickly running out to see two-time Tony Award-winning theatre icon Bernadette Peters give an awe-inspiring performance as Dolly Gallagher Levi in the Tony-winning revival of Hello, Dolly!

. Bernadette says so long dearie on July 15, and here are five reasons you’d be a Horace Vandergelder-sized fool to miss her live in at the Shubert Theatre.


You’d be hard-pressed to find an episode of any sitcom that is as funny and fast-paced as Bernadette, Victor Garber, Kate Baldwin, Gavin Creel, Charlie Stemp & Molly Griggs in this farcical Act 1 scene. A genius at comedy and performing comedy in front of a live audience, Bernadette knows precisely which lines and moments to lean into and which to nearly throw away. Then when infused with the musical numbers “Motherhood” and “Dancing”, it’s one of the greatest continuous scenes in any musical running on Broadway right now. I especially loved watching her watching the young couples come together slowly and unsurely in “Dancing”.

Her “Let Me Go” Monologue into “Before the Parade Passes By”


If you aren’t emo when she steps to the front of the passerelle for her conversation with Ephraim, you might need to get checked out. It’s such an incredibly raw, private moment that you as an audience member almost feel like you are intruding in on it. The care and time she takes in delivering each part of this is nothing short of beautiful. Then she goes and gives you those full Bernadette vocals on the number with the option up (it’s Dot, it’s the Witch, it’s Mabel, it’s Rose; it’s everything). She is so luminous as she steps into the chorus to rejoin the human race that of course the curtain comes down and the audiences needs a full 15 minutes to recover.


When the curtain opens and Bernadette struts down those steps in that red dress, you can’t help feel an entire career’s work (which began as a child actor!) led her to this well-deserved moment. It’s nothing short of epic. And if you don’t give it a standing ovation at the end, you don’t even deserve the encore.

Her Dinner Scene with Victor Garber


I’ve seen Bernadette and Victor Garber perform this scene many times and it’s never the same. These two are enjoying each other and the moment. It always feels fresh, and there’s a sense that anything can happen between them—which accounts for the frequent laughter between these two stage legends. Their joy is infectious, and the audience eats it up.


Bernadette Peters final moment alone onstage (while everyone is upstairs sorting out Horace’s finances) is magnificent. Each time it feels like she is delivering this speech about fools and love directly to you—as if it’s the one thing you were meant to hear that day and Bernadette was going to deliver it personally. It’s also the sweet spot her performance thrives in. Yes, she can do the big stuff and make you LOL till you tear up, but her Dolly flourishes in the quieter, authentic moments of this show. She goes beyond persona to deliver a fully realized person, a wise widow who earns the love of all she encounters.

Again, you only have until July 15 to see Bernadette Peters in "Hello, Dolly!" at Broadway's Shubert Theatre.