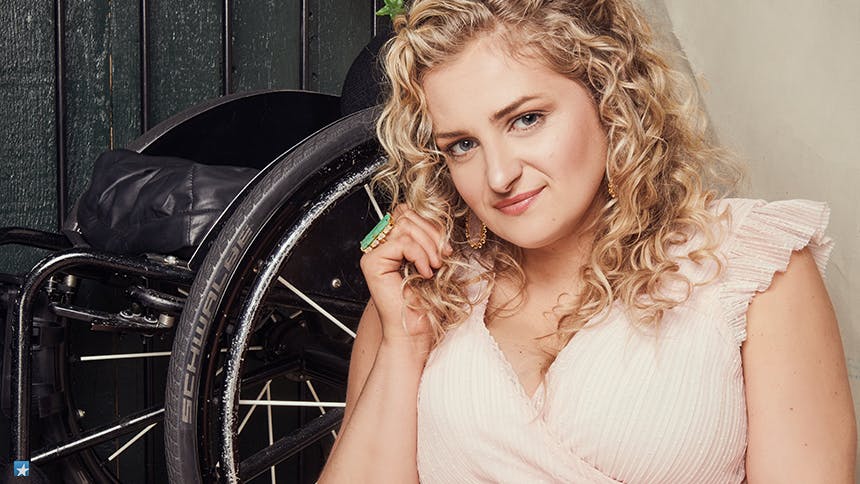 The Broadway showstopper is alive and well and living its best life this season, thanks to the 10 incredible performers featured in our upcoming spring photo & interview series. The talented group was photographed by Jenny Anderson at Times Square's Haswell Green's. This week, we kick off with Tony Award nominee Ali Stroker who has received every major award nomination in NYC for creating an Ado Annie all her own in the hit Broadway revival of Oklahoma!. Hilarious and magnetic, her Ado Annie is whip smart, and her performance of Rodgers and Hammerstein's “I Cain’t Say No” feels completely singular. You understand why every man wants her Ado Annie because the audience cain’t get enough of her either.


When you first took on Ado Annie, what did you want her to be? What was your vision for this character in this revival?
I want Ado Annie to be somebody who is real. I want her to be a person that exists in this world. So often, I had seen Ado Annie as a caricature and played as if she were dumb. And I never thought that this girl was dumb; I think she's really smart, and I think she knows what she wants. She's not ashamed of asking questions and finding out the answers.

By making her smart, you're giving Ado Annie so much more power over these men in her life.
Absolutely! In many ways, she is in control of these men.

How do you feel like Ado Annie has grown and changed since you started with her in Brooklyn?
When I did St. Ann's, the process was so different than any process I'd ever been in around a musical. Daniel Fish's approach is so different and so intimate. I spent weeks feeling like I was knocking my head against a wall—not knowing how to find this character and how to play her in the tone of this specific production. Then slowly, as I connected more to my [scene] partners, I think I realized that it's not so much about me, it's what she wants from the other person.


Do you remember the first time that you felt talented as a kid—like what you had was special?
This is very specific, but growing up as a little kid in a wheelchair, I was used to getting attention. But it felt like it was in a way that people either were trying to build me up, or (unfortunately in some situations) they felt bad for me. In this situation, when I sang and when I was performing, people treated me like I was powerful. I think that was the moment that I was hooked, because this is how I want live my life. This is the career I want because I want to be in a position of power.

How do you stay powerful as Ado Annie? How do you combat doubt and insecurity as an actress?
I think I make friends with it. Because the truth is, if you're going to put yourself out there every single night as a performer, there are going to be moments of doubt and insecurity. But for me, I grew up so much of my life being looked at and being seen—people would stare because of my wheelchair—so in many ways, I feel I've had so much training in being seen. So, when I feel doubt or when I get insecure, I really think back to what I want in the song or in this scene and how I can put my attention on my partner, whoever that might be. I put my attention on them and ask the questions, every single night, and really wanting the answers.


When you were auditioning for The Glee Project, what was the fantasy of what your career would be?
When I got out of college and started auditioning I was so shaken by the industry—realizing that it was not going to be easy and that doors weren't just going to fly open. It was going to take a lot of time for people to get on board with what I did, because I was doing something that no one else was doing. When I was auditioning for The Glee Project, I was actually really relieved because it was a world in which I felt I fit perfectly. Glee represented diversity, and they already had somebody in a chair representing a disabled character. So in many ways, I was like, “Oh, this is a door that can open,” because it was a world in which I fit into. Auditioning out in the musical theatre world of New York was really scary because I didn't see anybody else like me. I didn't see where the doors had opened.

I am truly obsessed with your voice in Oklahoma!. You are giving us shades of Dolly Parton and these amazing country queens. Who were the voices that you grew up idolizing?
I grew up listening to a lot of musical theatre. I grew up listening to Sherie Rene Scott, Sutton Foster, Kristin Chenoweth, Idina Menzel, and Whitney Houston. Those were the women that taught me to sing. I learned to sing as a kid by mimicking. I was like, “Oh, I can imitate that vibrato or I can imitate this.” And then doing songs in my voice lessons as a kid, all of a sudden just whispers of all those women came into my voice.


What was the first musical you were truly obsessed with?
Annie, 'cause I was in Annie when I was seven. I watched the VHS a thousand times, learning and mimicking. I didn't know how to act when I was seven, but I was watching how they were playing the scenes—you act surprised there and mad there and this is the inflection in your voice. As a kid, so much of our development is copying and mimicking, whether it be our parents or whether it be our idols. In this specific industry, it’s this really cool experience of learning who you are as a performer through these other people.

What's the most sentimental thing in your dressing room in Oklahoma!?
I keep all the cards and letters of encouragement that everyone writes for me. I'm creating this whole wall of people who are behind me and rooting for me. The truth is, for me, I would never be where I am today without all the people who said yes and encouraged and believed in me. I had so many insecurities and doubts growing up but the voices that were louder than all the doubt and insecurity were the voices of support and love and encouragement. Even as a 31-year-old woman, you still need that.


Outside of Oklahoma!, what do you feel like has been the most fulfilling piece of your career?
Doing Spring Awakening on Broadway was just a life-changing experience. It was with Deaf West, and it was the first time I felt like a real part of my community and the disabled community. I live by this motto of turning your limitations into your opportunities, and that's exactly what the show and all these actors were doing every single night. I felt like I was with my tribe and my people.

Oklahoma!
Best Priced Tickets
Newer
Get to Know the Ladies of BLKS: Paige Gilbert, Alfie Fuller, & Antoinette Crowe-Legacy Talk About Their "Unbelievable" Connection to the New Comedy & Each Other
Older
Tony Award Winner Casey Nicholaw Takes on Seven Questions About Directing The Prom, Beth Leavel, Dreamgirls, & His Upcoming Some Like It Hot Musical
Sign up for BroadwayBox Discount Alerts