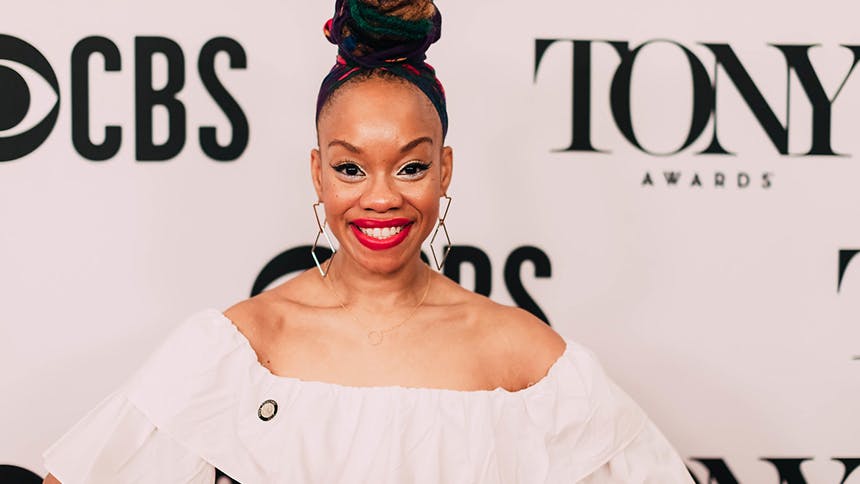 
She’s one of the most in-demand choreographers working right now. In addition to the dance company that bears her name, Camille A. Brown & Dancers, the Drama Desk, OCC, and Chita Rivera Award nominee choreographed Broadway’s Tony-winning Once On This Island revival, NBC’s Jesus Christ Superstar Live, and a handful of off-Broadway plays and musicals, including Roundabout’s new baseball play Toni Stone.


BroadwayBox caught up with Camille to hear from the Tony nominee about five dance numbers that truly shaped and inspired her as a dancer and choreographer.


There's the scene called “He's My Friend”, and halfway into it [starting at 4:23] Debbie Reynolds is dancing with Grover Dale and Gus Trikonis, and I just think it's fantastic. I think the choreography that Peter Gennaro put on them is just so good. It's very rhythmic. Debbie Reynolds is dancing her heart out. It's so hard for energy to get through the television and actually reach people who are watching it on their TV screens, but they're just giving so much energy. It's just everything that I love about dancing.

“There’s Gotta Be Something Better Than This”, Sweet Charity


Chita Rivera, Paula Kelly, and Shirley Maclaine are just ferocious in that. Powerful women dancing their hearts out. For me, it's a moment that I need to watch in terms of the performer. I definitely love the choreography that Bob Fosse did, but it’s the intention of the women when they're dancing. Those are first-class performers.


There was a moment when Savion Glover was standing in front of all the mirrors, looking at himself and dancing. For me, it was like these are the many faces or the double consciousness of a black man in time. Looking at the mirror, looking past the mirror. What do you see? You see a reflection, but you also see what is behind you and what is ahead of you. I saw it when I was a teen, but that image just stuck with me—of him just looking at the mirror. Now I've choreographed pieces about double consciousness, so that's definitely a reference that I go back to—how I felt watching him in that moment. As a teenager I didn't necessarily understand as much I do now about that moment, but it definitely made an impression.


Iconic! That was probably the most black people I've seen dancing in one space…ever. I just thought that was heaven. Then to choreograph it at The Muny, I felt part of a lineage. I'm following Louis Johnson and George Faison, so going into it I definitely wanted to honor them but also put in my own voice. You pay tribute to those people that came before you and those dancers, and also move in the space where you are creating your own voice and your vision for it.


There’s that part at the end, where he is tapping and they connect his tap shoes to some sound design, so everywhere he goes it changes the sound. Then, when he comes back on stage, he has that call and response with the drum. That is everything. That is the African Diaspora. That is black people—it’s the African tradition of the drum. It’s something that is always connected to us in America, and we have taken it and claimed it as our own. We never forget the past. We never forget the original. I just thought it was magnificent that Gregory Hines had that moment where he was honoring the African tradition through tap.

Toni Stone
Best Priced Tickets
Newer
Fiddler on the Roof Duo Rosie Jo Neddy & Cameron Johnson Talk About Their "Dangerous" Onstage Relationship and Why Fiddler Remains the Perfect Musical
Older
Get to Know the Ladies of BLKS: Paige Gilbert, Alfie Fuller, & Antoinette Crowe-Legacy Talk About Their "Unbelievable" Connection to the New Comedy & Each Other
Sign up for BroadwayBox Discount Alerts