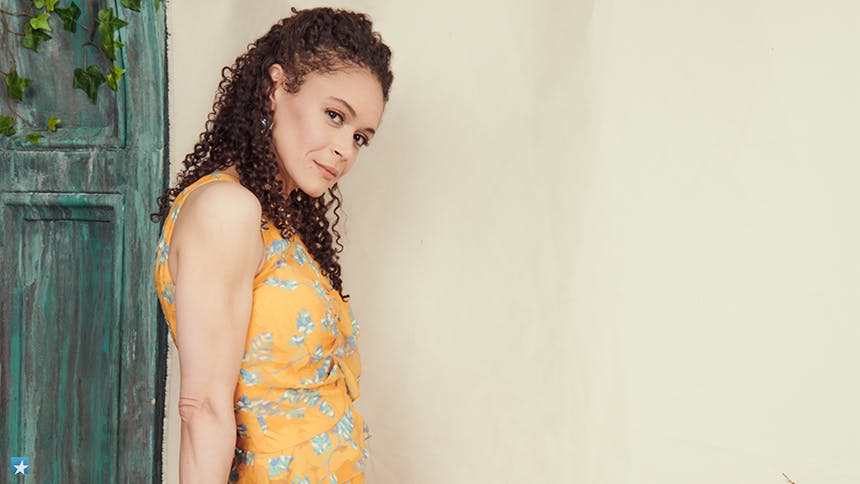 The Broadway showstopper is alive and well and living its best life this season, thanks to the 10 incredible performers featured in our upcoming spring photo & interview series. The talented group was photographed by Jenny Anderson at Times Square's Haswell Green's. Next up is Tony Award nominee and Outer Critics Circle winner Amber Gray, who gives one of the most memorable performances of the season as the Queen of the Underworld in the hit musical Hadestown

. Find one person who has seen Hadestown and wouldn't follow Amber Gray and her Persephone to hell and back. Amber has been with the show since its premiere off-Broadway at New York Theatre Workshop in 2016. Since then, she's performed her Persephone in three countries around the world, and become the life force of the 14-time Tony-nominated musical; she essentially kicks off both acts of the show (as well as the encore), and her second act opener “Our Lady of the Underground” is a gift from the gods.

What was important for you to infuse her with? Who is she to you now, and how did you make sure she was more than Hades’ trophy wife?
I’ve never seen her that way. She's always been a bad ass to me. From the beginning. And actually, with some of the rewrites in this last iteration I had to really sit down with Chavkin and Anaïs and go back to the drawing board about little teeny tweaks. In this version, Hades is so—and I, Amber Gray use this word—mean. There were many moments in this new version where he was sort of paper-cutting her or knocking her down in little ways—little slights that she had no language in which to defend herself, which was making me really angry. I'm like, "No, she would kick him in the balls." I've never seen her as weak or like a trophy wife. She's like a gangster wife.


How do you find that confidence and energy that you need to bring to the show every night as Persephone? How do you summon it on nights you’re not feeling it?
Honestly, the music is what sustains me most cleanly. That's the easiest thing. Even physically having to sing those notes every night energizes you for the event. The music keeps you buoyant for a lot of it if you don't feel like it.

Is the music a part of why you've continued on this journey with Hadestown for years?
Yes, without a doubt. It was the thing that turned me on about it from the beginning. The first time I ever heard it, I listened to the album on a bike ride home. Then when I got home, I immediately listened to it again in cans while reading the lyrics online at the same time, and that was the first time the story actually sank in. But the music is what got me right away, and it's definitely the reason I stay. And it's what it so fun about doing it over and over again. It just feels celebratory every night.


This is the second time Broadway audiences have watched you stop the show in a Rachel Chavkin-helmed musical. I’ll never forget “Charming” from Natasha, Pierre, & The Great Comet of 1812. What makes your relationship and collaboration with Rachel work the way it does?
She's one of my greatest collaborators and one of my greatest champions. She sees things in me that I don't see. She trusts that I will get there and pushes me to do so. She's a hard-ass. She will get what she wants out of you, but she does that in a very gracious way. I always joke that Chavkin has an amazing poker face. She keeps her cards very close, and she's very respectful to everybody. She's so good at working with actors; if you try something, she'll be like, "Thank you for trying that. We're gonna go in a different direction." But she’s never insulting you in the process. The making of art is always really ugly in the middle, and she respects that process and knows that and is not hard on you during that really yucky phase. She just keeps helping you get out of it.

What was the biggest challenge for you in Hadestown, and how did you work to overcome it?
All four of the versions have had some pretty massive changes. There's one company member, who in this really pivotal moment just had a meltdown and said, "I hate change." And it's like a joke in our company, and it is definitely a joke that I use a lot. Especially, once you feel like you've understood how to play a role and then it just starts to change massively. It takes a long time for the muscle memory to catch up. There have been some changes, when I first read them on the page, I found heartbreaking. Then you just have to fully, fully try it and rehearse it for a while, but it takes a while. Muscle memory is no joke, and that's all equally as connected with your emotional memory as well. That is what is so special about doing many iterations of something, but also what is the most challenging for me. It takes me a while to catch up.


What's one thing you've learned during your run in Great Comet that you brought to this run in Hadestown?
Honestly, it's more about physical survival. Those Broadway houses are toxic. They’re old and filled with dust and mold and asbestos. You don't think it is a big deal, but then when you're breathing in that air for so many hours and having to sing eight times a week. You’re not really meant to sing that much that hard eight times a week so there’s an athleticism to it. I learned how to have the stamina for it and how to take care of myself physically and vocally. Finding the right homeopathic stuff or herbs to have around on a regular basis to make sure that your sinuses and your throat stay healthy. Singers are disgusting with the amount of steaming and Neti-ing we do. We do such nasty things to be able to keep singing.

Do you remember the first time that you felt talented—like what you had was special?
My high school had a really good theatre department, and our teacher believed you gave the weakest link the lead. So, I got the lead three productions in a row. The seniors would stay after rehearsal and be like, "You're really bad, so we're going to rehearse you for an extra hour." That's where it hit me that there's craft to acting—it's something you can learn. And that was when I really fell in love with the community of it, that everybody pulled each other up by the bootstraps. It was the beginning of me working on getting better at it. I really do believe anyone can learn how to act. But, especially in America, if you're a chef, if you're a model, if you're something else, you can just go act in a show, and that makes me angry because there is a craft to it and you can learn it.


You are the first and only person to play Persephone in Hadestown, but undoubtedly this will be done on tour, in colleges, community theatres, etc. What do you want the other actresses who will one day play this part to know about it?
Gosh, I so look forward to seeing those. I want them to know that she's a three-dimensional human. I don't say that lightly. She's not that simple, don't fall into that trap.

I love your voice. I'm sure there are going to be people who grow up now and try to learn to sound like Amber Gray.
That's so funny.
Who were the voices that you were obsessed with and mimicking growing up?
Björk. I don't read music, so when I was growing up the way I learned how to sing was by trying to make the same sounds that other people were making. And that woman makes some crazy noises. Sometimes it's a blessing on my side that I can't read music, because I don't look at a note on a page and get scared that it's too high or too low. You just have to physically try to figure out how to do it. A lot of how I learned how to sing was by just trying to sing along to Tori Amos or Björk, and those women have crazy ranges. I don't know that I was ever trying to sound like a particular person; I just wanted to physically understand how they were able to make the sounds they were making. And now, clearly, you know what kind of teenager I was.