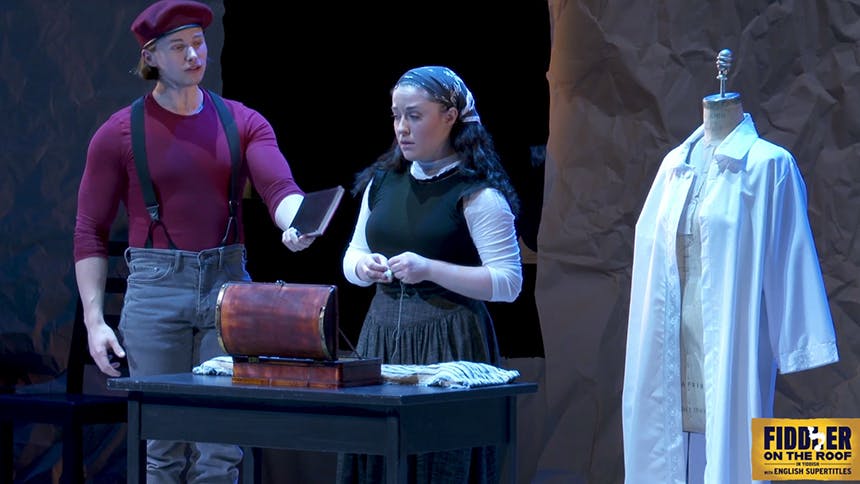 If you have even a passing interest in Fiddler on the Roof, then you have to run and see the award-winning off-Broadway revival directed by Oscar and Tony winner Joel Grey! Performed in Yiddish with English subtitles, this Fiddler on the Roof is incredibly powerful and feels so current, in large part because of the fantastic, grounded performances. This month, we spotlight each of Fiddler’s onstage couples, and we wrap with Rosie Jo Neddy and Cameron Johnson. The young actors co-star as Khave and Fyedke, the interfaith couple that pushes the boundaries of what Tveye and the town of Anatevka can accept. Read on as the dynamic duo discuss their "dangerous" Fiddler on the Roof relationship, getting emotional at the theatre, and why Fiddler remains the perfect show.

What was your first introduction to Fiddler?

Rosie Jo:
My first taste of Fiddler was seeing a community theatre production when I was 8 years old. Very soon after that, I acquired a DVD of the 1971 film and became enthralled. When I was 12 or 13, I mentioned to someone that I loved Fiddler on the Roof, and they said it was a show they could never really get in to. They found it boring. I flipped out and was like, “HOW could you find it boring?!!?? It intimately traces a middle-aged man’s emotional journey through multiple life changes! Ups, downs, joy, sorrow!”  There was a time when I watched the movie every month.

There was also a sad teenage time where I would watch it every New Year’s Eve after watching the ball drop on TV and have a cathartic cry.

Cameron:
Apart from having seen the movie, I had never seen or been in a production of Fiddler before this one. I was familiar with the music, of course, as it has made its way to people’s ears regardless of whether they have seen the show or not. But after doing it a couple hundred times, hearing the original English lyrics is now very strange.

Why do you think Fiddler feels so important and relevant right now?

Rosie Jo:
We are living in a time where people who are coming of age are identifying in ways their parents don’t understand. We, as families, are now presented with the challenge of adaptation. How will we, as people who love each other, incorporate new ideas into our already woven quilt?

On the other hand, you could say that about any generation. I guess that’s why it remains relevant.

Another theme of the show is intolerance. The Pittsburgh Tree of Life shooting occurred during our original run downtown. It was a painful reminder that we aren’t as far away from the anti-Semitic pogrom at the end of the first act as we should be. Then the mosque shootings in New Zealand happened. If this play is about hatred toward people because of their religious beliefs, then unfortunately, it is as relevant as it ever.

There are groups of people whose ancestors were discriminated against who now feel safe and welcome in their countries. My hope is that when those people see our show, they feel empathy for the people in the world still suffering from hate.

Cameron:
Fiddler is incredibly poignant today.  We are inundated with stories of hate and bad deeds in the news and on social media. Fiddler shows us what hate leads to. And it shows that the victims of hate are people who share our universal values of love, belonging, and family. But I don't think there could be a time when Fiddler is not important and relevant.

What is a tradition that is important to you (could be a religious tradition or even a pre-show ritual)?

Cameron:
I have a tradition tied to this run of Fiddler, actually. My friend Ben Liebert, who plays Motl, and I play cribbage backstage. We have played an embarrassingly large amount of games.

When crafting your performance, what was the most important thing director Joel Grey said to you?

Rosie Jo:
“Everyone does bad things.”

Cameron:
One of the first things Joel told me, early on in the rehearsal process, was that Fiddler is a perfect show. There are no weak spots, and every single word matters. He would remind me of this while we worked together and it led to an environment where specificity was paramount.

How has your performance changed or grown since you first took on the role? Is there anything you feel like you know about the character or their relationship now that you didn’t before?

Rosie Jo:
Every night, it is the first time Khave has lived the story. But each time I do the show, it’s one more time for me. Almost 300 times now. So, in a way, Khave is maturing.

One line I say is, “kh’ob farshtanen” or “I understand,” after Tevye tells me to never see Fyedke again. This could mean so many things, which is what makes the character so juicy. Toward the beginning of our run, I came from a place of anger there. It was, “I understand that you are not the progressive man I thought you were.” Recently, it’s been more resigned and mournful, “I understand that you will be unable to change, and I understand what that means for us.”

Cameron:
Yes. When I first thought of Fyedka and his courtship of Khave, I had a simpler view of what was going on. I saw a boy who had feelings for a girl, so he went for it. But Fyedka and Khave are both intelligent, well-read young people, and would both be fully aware the risk that would come of a relationship between them. So, this isn't just frivolity. The pursuit of this relationship is dangerous, and therefore seriously important.

This is such an incredibly moving production. What’s the most emotional you’ve been as an audience member in the theatre?

Rosie Jo:
Senior year of high school, my dad drove me to Chicago for a bunch of college auditions. As we pulled into the city, I saw a huge marquee: “CATHY RIGBY PETER PAN FAREWELL TOUR.” I had known about the tour, but had dismissed it since they weren’t coming to Ohio.

I grew up on the VHS. Peter Pan is my dream of dream roles. After a week of college auditions, I’d been especially yearning for a career in the theatre. I’d also been reflecting on growing up and moving on. I sat down ready to see a childhood idol perform a role with which she had made a life. Those upstage windows opened in the first scene, and I lost it.

Cameron:
One moment that has had staying power with me is from Fun Home. The song "Days and Days" had me blubbering in my seat. Notably when Mrs. Bechdel tells Allison "Don't you come back here..." because she doesn't want to see her daughter waste her days like she had. I was a mess.

Tell me about someone else’s moment in Yiddish Fiddler that you look forward to each night.

Rosie Jo:
The Fiddle dance!! After “L’Chaim”, Tevye and the Fiddler have a beautiful, drunken, joyful duet. Every night I stand backstage left and watch them. Our Fiddler, Lauren Jeanne Thomas, is actually playing while dancing, which is a thrill every time. Our Tevye, Steven Skybell, pretends to fiddle on his empty liquor bottle. She is full of whimsy. He lets go and is simply having a blast pretending to fiddle, almost as a child would. To me, the dance is a love duet. We see how pure and good Tevye’s connection to tradition is.

On a nerdier side, it’s such an inventive piece in the construction of the musical. In 30 seconds, it sets up for us how movement will be used as metaphor throughout the show.

Cameron:
There's a moment that I look forward to and actually have the pleasure of witnessing on stage firsthand every night. It is when our Tevye, Steven Skybell, (who I very much admire and respect) says his final words to Khave, "Got iz mit dir," breaking his silence before she leaves for Krakow. Steven moves me every single time (along with the audience).

Don’t miss Rosie Jo and Cameron as Khave and Fyedke in Fiddler on the Roof at off-Broadway’s Stage 42.