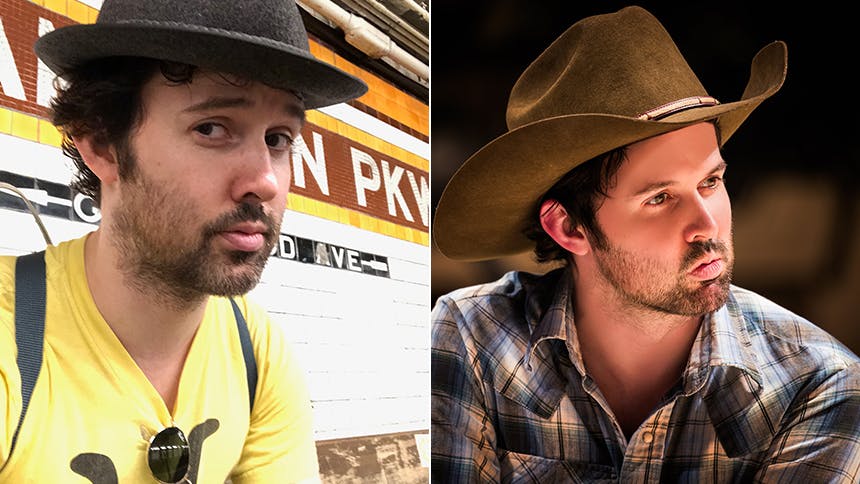 James Davis gives a breakout featured performance as the dim-witted charmer Will Parker in the hit, Tony-nominated revival of Rodgers and Hammerstein's Oklahoma!

. James (who made his Broadway debut in 2011 as part of The House of Blue Leaves revival) has been part of the acclaimed Daniel Fish production since its premiere at Bard Summerscape, and received a 2019 Theater World Award for his work. His joyful "Kansas City" and his hilarious "All Er Nuthin'" are highlights of the incredible revival.

BroadwayBox caught up with James to discuss growing up as the class clown, his passion for travel, and crafting his performance in Oklahoma!.

1. You’ve been a part of this Oklahoma! since its beginning. What was it about this Daniel Fish production that kept you wanting to continue through the years?
Easy. It’s the most rewarding job I’ve ever had. I love this cast and the creatives like they’re my family. The material is so rich and fun and beautiful. I never get tired of listening to the music. Will Parker cracks me up!

2. What’s your goal in creating your Will Parker for this revival?
As with any process, my goal is to create the character out of collaboration. A Will Parker that is informed by what’s in the script, what Daniel Fish sees and suggests, by what Ali Stroker gives me as Ado Annie, how John Heginbotham’s choreography informs my movement, and then finally to trust every impulse that follows.

3. Will comes back from Kansas City with a bag of goods. What’s the coolest thing you’ve returned from a trip with?
Three custom made suits from Hoi An, Vietnam. And a ton of other clothing I had made while there this past winter. That was fun and a first; designing.

4. Which scene or moment in Oklahoma! was the easiest for you to find and which was hardest?
I lay on a table and pop up when I’m first going to see Ado Annie. There are crock pots of chili on these tables. I had an instinct early on to take the lid off a crock pot that was close to my crotch and wave the steam toward her. I’ve done it ever since.

The hardest moment is in the auction when I’m about to outbid the peddler to buy Ado Annie’s basket. I have to stop midway and realize I shouldn’t bid anymore so I can keep my money and give it to her paw as a sort of dowry to “get Ado Annie.” It’s a delicate comedic moment shared by three actors and it didn’t work until this Broadway run. We found it. And (knock on wood) it works like gangbusters.

5. Do you remember the first time you felt like you were good at comedy?
I was always trying to make my teachers laugh, charm and distract them, instead of doing my class work. My first grade teacher said, “You’re going to be a clown when you grow up!” She wasn’t completely wrong.

6. What was the highlight from your time at Juilliard?
A guest director taught me how to work on Shakespearean prose and verse that finally made sense to me. It was while directing me in multiple parts in Shakespeare’s R&J my 4th and final year. It was like I learned a new super power. Most of my jobs right out of school were Shakespeare plays: Othello, Romeo and Juliet, Hamlet, Two Gentlemen of Verona, etc. So, it paid off.

7. What’s one thing you feel passionate about outside of performing?
Travel, travel, travel. International cities and exotic landscapes.

8. Tell us a memorable audition story.
I’d like to forget most of them, to be honest. BUT! My cast mate, Will Brill (who plays the peddler), and I both got called back for the role of Bobby in American Buffalo. The callback was in Washington D.C. We met each other on the four-and-half-hour bus ride, auditioned, got dinner together, and took the four-and-half-hour bus ride back together. I got it! Haha...but he’s beat me out for other roles since, and we’ve worked together twice now. So, all good.

9. What do you feel has been the biggest challenge to get to this point in your career?
Starting out, no one knows you. You have to prove yourself over and over and over again. You have to form relationships. Work with the right people. Figure out what you want to offer as an artist. Be brave and confident and often fail at the same time. So, I guess I would say...establishing yourself.

10.  With the staging and lighting of Oklahoma!  you get a great view of the audience. What’s the craziest or weirdest thing you’ve looked out and seen during a performance?
I have a leap between tables. Right where I’m supposed to land, a man had unpacked what seemed to be his entire life: coffee cup, bottle of water, notepad, pens, magazines and newspaper, cell phone, and his huge messenger bag. I had to run over mid “Kansas City” dance, pre-jump, and move it all out of the way. He had set up camp!

Don’t miss James Davis as Will Parker in ‘Oklahoma!’ at Broadway’s Circle in the Square Theatre through January 19.