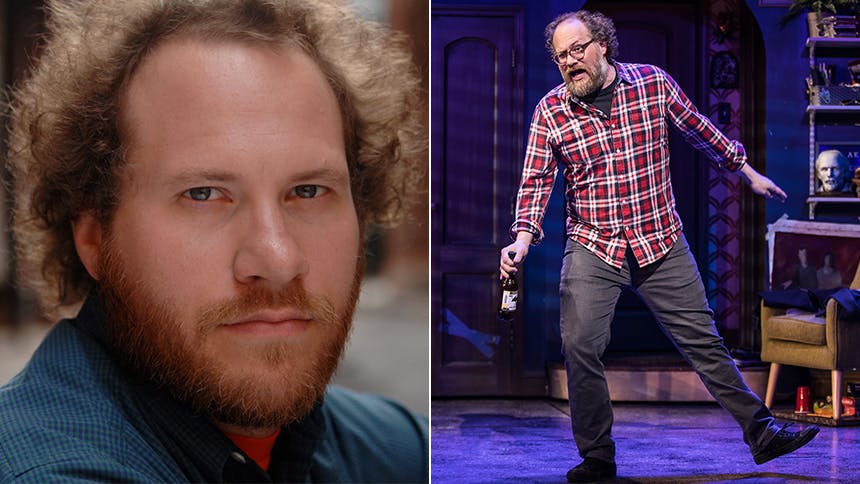 Andy Grotelueschen received a 2019 Tony Award nomination for his hilarious performance as Jeff Slater, a struggling playwright and Michael Dorsey/Dorothy Michaels' roommate, in the hit Broadway musical adaptation of Tootsie

. BroadwayBox caught up with Andy to discuss crafting his Tony-nominated Tootsie performance, his work with Fiasco Theater, and his study of clowning.

1. How did you craft the character of Jeff? What were your goals for him?
Jeff is a particular acting challenge, because it's so close to "me." I've spent most of my career as a character actor bridging the gaps between myself and the roles, and usually those spans have been a lot further distance to travel. With Jeff, I spent most of time in rehearsal in a sense trying "not to act." And as always with comedy, you can tell you're getting closer to the character when you hear the laughter. Robert Horn, who writes comedy as easily as the rest of us make toast, and I were constantly circling and zeroing in on Jeff—finding the balance between his cynicism and helpful criticism of his best friend, Michael.

2. What was Tony nomination day like for you? What sticks out most from the day?
It was a crazy day. I woke up and my phone was on fire. I sat on the couch for about 4 hours just making calls and replying to messages. It's amazing to be recognized for the project you're working on; but even more, with something like this, it's astounding to hear the well-wishes from near and far, present and very past, from all the different corners of your life. That's a rare thing to encounter and makes you feel big and small at the same time. I'm so proud of this show and everyone's work in it, on it, and around it, and so thrilled that it's being well-received.

3. You have some amazing and hilarious scenes with fellow nominees Santino Fontana and Sarah Stiles. What do you love about playing onstage with those two?
Santino is a great leading man. He's also a great straight man—even when he's dressed as a woman. He hears everything and thinks faster than everybody, so there's an acute attention when you're in scenes with him. Sarah's hilarious, walking electricity. I just kinda try to keep up with her. I love being onstage with them because they're really fun to act with.

4. How has your study of clowning helped you in Tootsie?
The biggest thing in Clown is you have to play through the audience. In a sense, you can't know anything without them. They tell you what's funny, not the other way around. You try all kinds of different things, most of which don't work. But the fun things that do make them laugh, you remember and you try again. Then they don't laugh. And you start over. The repetition of that process teaches you lots of lessons.

5. You took Fiasco’s Into the Woods

all over the world. What was that experience like? How did it change you as a performer?
We did the show at the McCarter, the Old Globe, the Roundabout, and the Menier Chocolate Factory in London. When having that many goes in that many places, I could feel the bones of our particular interpretation and learned where the ease in performance was. So often actors think if they're not full-out acting every second that nothing is happening. If you're always driving the car 90 miles an hour, two things will happen. One, you'll miss a lot of lovely scenery along the way. Two, you're eventually gonna crash that car.

6. What do you find so fulfilling about your work as a core company member of the Fiasco Theater?
We work collaboratively. Often, there's more than one director. Often, the directors are acting in the show as well. We spend time unpacking the plays, sometimes years in advance of doing them. There's lots and lots of gestation time. I think it shows in the final productions. We never freeze shows. Performance is truly a furthering of our collaboration and an open invitation to the audience to continue the conversation. The company has been around a decade now. I know and appreciate how extremely rare an ongoing collaboration like this truly is.

7. You’ve done a bunch of Shakespeare. What’s your Shakespearean dream role?
I've never been a "dream role" kinda guy, ‘cause I believe in the whole being greater than the sum of its parts. But if pressed, Benedick seems fun. Titus would be a hoot. But there's lots of other great roles from great plays that are old and are NOT Shakespearean. Don't worry, Fiasco will show them to you. Watch out!

8. Which film or comedic film performances makes you laugh every single time you watch it?
I know I'm playing the Bill Murray role in Tootsie, so this seems a little on the nose, but What About Bob? is still hilarious. Peter Sellers in the The Pink Panther. Lebowski.

9. Tell us a memorable audition story.
When I first got to the city, I think my agent had it in his head that I was gonna play the Big Bopper in The Buddy Holly Story someplace, and I auditioned for at least 4 different productions—never booking any of them. At my first audition, the accompanist was so loud, and I was so nervous, that as I sang a terrible rendition of "Chantilly Lace," I slowly and inexplicably scooted myself away from the piano, away from the director's table, all while snapping my fingers, winding up across the room in front of the door with just enough time and space to say "thanks," and ran into the hall.

10. What was the show or experience that inspired you to become a professional performer?
When I was in high school in Iowa, our drama teacher, Stacy Hansen, would take us for theatre trips to Chicago in the spring. I saw plays there that were the most thrilling things I'd ever seen.  And seeing those fantastic actors in those shows, I wanted nothing more. What amazing luck that I'm doing it now.