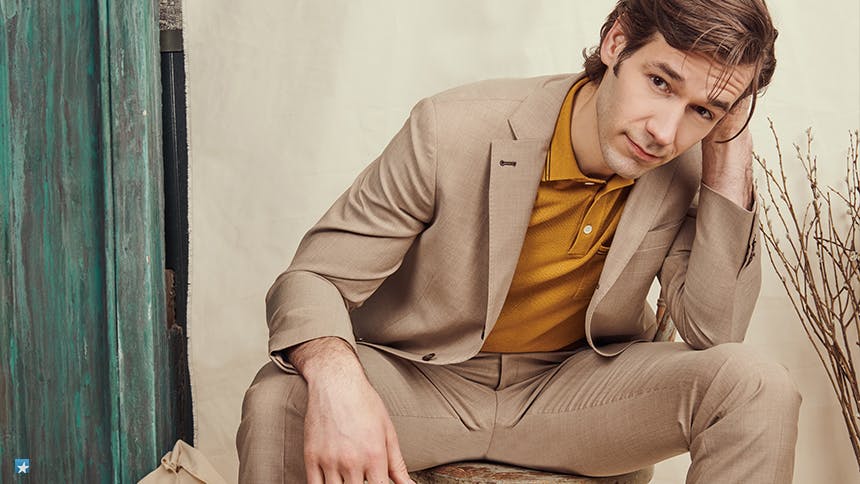 The Broadway showstopper is alive and well and living its best life this season, thanks to the 10 incredible performers featured in our upcoming spring photo & interview series. The talented group was photographed by Jenny Anderson at Times Square's Haswell Green's. Kicking off the final week before the Tony Awards is Tootsie star John Behlmann. In his first Broadway musical, John gives a hilarious, endearing, and scene-stealing featured performance as Max Van Horn, a former reality TV heartthrob giving Broadway a try in the musical-within-a-musical Juliet's Curse. Beyond abs and jokes, John truly makes you care about this young, naive, and somewhat vapid guy trying to better himself, while falling in love with his new mentor Dorothy Michaels. His big song “This Thing” is a wonderful showcase for his killer comic timing.


Let’s start at the beginning. You’re cast in the role of Max Van Horn, a new character for the musical that wasn’t in the film. Where do you begin? What do you want to bring to him?
I'm the only brand-new character not from the movie. I remember when I was told about my part in the reading, I was like, "Wait, who? Isn't he an old guy?" That's the closest equivalent. So, I don't carry the burden, at least, some other people have of direct comparisons to a movie that everyone knows and loves. But I'm the dumb blonde in the cast, so I think the trap of a part like mine is making it just dumb. He's not a bright fellow, but I wanted to give it some sense of heart. That is really my main goal with it.

How do you then balance landing all comedy that comes from him being dumb but also showing us someone who is trying his hardest to learn and grow and become a new man?
I think a lot of that was a process with our great writer, Robert Horn. He really listens, and he can write a joke at the drop of a hat. There were times in rehearsal where he would say, "I know we need a joke here," and then present us a sheet of 10 jokes that he had written to choose from. He can just churn them out, so the joke stuff was never going to be a problem. And all the jokes and writing are very character specific, so if you have an actual journey you're pursuing, then they will fulfill it. You're not fighting against it too much. So, for me, I was just trying to make sure that this guy actually wants something. Because he earnestly, really wants to be better at his job; and he knows he has room for improvement; and he knows that Dorothy is a genius and can help him; and his feelings get a little misguided because of that.

What was it like working so closely with Tony Award winner David Yazbek on your song “This Thing”?
It’s funny, my song is one of the only songs that didn’t really change a lick during the entire process. David did a demo of it before the first reading, and that’s how I learned the song, and it really has not altered since. It’s so clear he loves writing for characters like mine and Sarah. He loves those comic side character songs, so I feel really lucky he wanted to write a song for this guy.

Max is a former reality show contestant from Race to Bachelor Island. Do you have a guilty pleasure reality TV obsession?
Oh boy. I try not to watch too many of them. I used to be a massive Amazing Race fan (shout-out to Nick Spangler in our cast, who won The Amazing Race!). Right now, I have been watching perhaps the lowest of the low on reality TV, which is Love Island. It is a British show—which is just like all the trashy American reality TV dialed up to 11—with crazy accents from all over the UK, and it's like Jersey Shore mixed with The Bachelor. They’re all 20 years old and beautiful and drunk and smoking, and there's a lot of sex. It's really, really, really dark but it's a massive hit in Britain.


So part of this gig is obviously being shirtless and staying in crazy good-shape. What is your cheat meal? What do you ball-out on when you can treat yourself?
I mostly just work out so I can have a drink all the time. It's bourbon most days, my cheat meal. It's like a mini cheat meal every day. I try not to be a psychopath about all the fitness stuff. As long as I work out a little bit every day, then I feel okay about plowing through a bag of yogurt-covered pretzels or something.

Do you remember the first time that you felt talented?
I remember in sixth grade, my friend, Matt, and I had a long class, and then lunch, and then another class together, and we would write little skits over the lunch—never thinking that we would do them for the class. And after the first couple of those, our classmates really wanted to see whatever skit we had. I remember feeling then like, "Wow, this is really great." Though none of that translated into thinking I wanted to be an actor until after college.


Taking Tootsie out of the equation, which credit did you feel most artistically fulfilled or proud so far in your career?
Something that I've really loved about Tootsie is that it's my first Broadway musical. I haven't done many musicals so using those skill sets and doing something new is always super fulfilling. I did a musical of Bull Durham in Atlanta a few years ago, and that part is some of the most fun I've ever had. It's similar to this in that I'm dancing and I'm singing, which is not something that I ever thought I would be doing professionally. And then I got to play a villain in the movie Dead Sound, and I never get to be the bad guy. I look like a nice person, but I got to be a sadistic boat captain and torture some kids in this horror movie. I like the variety of things, so getting to do new stuff is my favorite thing in the world.

You are the first person to play Max Van Horn professionally, but undoubtedly Tootsie will tour and be done in schools and regional theatres. What do you want future actors playing Max to know about him?
Don't just play the jokes. The jokes are there and the script is hilarious, but really try to find some kind of emotional connection to something. Otherwise, you'll lose your way.


Have you ever given thought about what happens to Max after this experience in Juliet’s Curse/Juliet’s Nurse?
Yeah. I have thought about that. I kept advocating for a line later to wrap up Max's story, but it didn't find its way into the script, surprisingly. Well, ostensibly, he carries on with the show with a new actress in the role that Dorothy played. Then I think he probably tries to do a lot more acting, but I don't know that it goes so well. His confidence has increased, but I don't know that his ability has necessarily increased. So, he'll probably end up hosting a taxi cab show—one of those things that roll in the back of your cab.