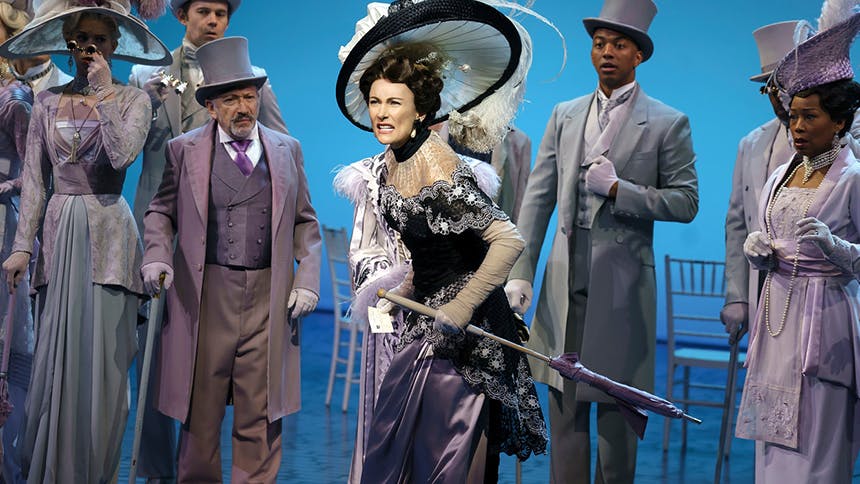 . The Tony-nominated Lerner & Loewe musical ends its Broadway run on July 7, and you’d be foolish not to hurry to see Benanti at least once more before then.


BroadwayBox could not let the official Eliza Doolittle Day pass without talking about Laura Benanti and the moments she gave us absolute life in this production. (Also none of these are musical numbers, because you know Ms. B brings the vocals every time.)

Make no mistake, with Laura Benanti at the top, this My Fair Lady is a musical comedy. She mines the comedy in every single scene. Her Eliza is in on the joke about herself, and Laura lets us know that through her physical comedy. Beyond the constant stage business, those facial expressions are Bea Arthur levels of brilliant. I love Benanti’s TV work, and she brings what works for her in that medium to this one. We may not be able to cut directly to her close up, but she’s always giving it to you. The scene with her learning how to pronounce her “h” is especially playful and hilarious.

The Dynamic with Higgins & Hill

The relationship between Laura’s Eliza and the two younger men in her life is expertly drawn here. Laura is tough but vulnerable in her interactions with Higgins. She needs him to better herself in some ways, but she’s never so reliant on him and his mercy that she needs to stay with him. Her final scene feels completely earned, because she’s always been strong with Henry Higgins. Then, I saw something completely new in the relationship between Eliza and Freddy Eynsford-Hill. Played by Laura and Christian Dante White, these are two fish out of water who delight in each other preciously because they are unlike the rest of the cold and stuffy aristocratic set. They are such kindred spirits that his stalking out her street and her turning to him as things go awry doesn’t seem so strange.

This scene is truly worth the price of admission. Laura is magnetic, and it’s the funniest scene in the show. She brilliantly plays the nerves Eliza must be feel making her mini debut in society. You can’t take your eyes off her for fear of missing a moment. And she’s not just playing it all for laughs—she knows when to wink at the audience and when to ignore them. Her coy delivery of “come on, Dover” (before the big “move your bloomin’ arse”) is etched in my musical memory for years to come.


Finally, when you cast a woman as strong and smart as Laura Benanti, you have to expect that some of her strength will bleed into the character, and it’s that strength that makes her Eliza feel so contemporary. Her scene with Rosemary Harris feel like when the women come together on Game of Thrones. They are the smartest people in the room, and their survival so far has been more than just sheer luck. Similarly, her “what am I to do” scene with Harry Hadden-Paton after the Embassy Ball remains one of the best-acted book scenes in any Broadway musical right now. Her strength and truthfulness in that moment is perfection. You clearly see who this Eliza Doolittle is in that instant, and she’s a badass.