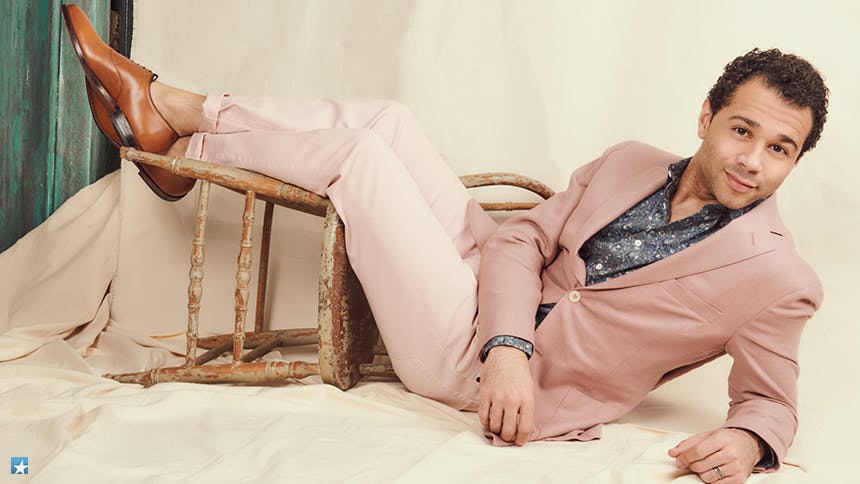 The Broadway showstopper is alive and well and living its best life this season, thanks to the 10 incredible performers featured in our upcoming spring photo & interview series. The talented group was photographed by Jenny Anderson at Times Square's Haswell Green's. This week we turn the focus to Drama Desk nominee Corbin Bleu, the Broadway hoofer and matinee idol who gives a career-best performance as Bill Calhoun/Lucentio in Roundabout Theatre Company's Tony-nominated revival of Kiss Me, Kate

. It's the former High School Musical star's fourth Broadway show, and he displays the kind of throwback talent only found in MGM musicals with his thrilling Act II showstopper “Bianca”. He even tap dances on the ceiling at one point! He's equally as mesmerizing earlier in the musical dancing Warren Carlyle's “Tom, Dick, or Harry” and “Too Darn Hot”. 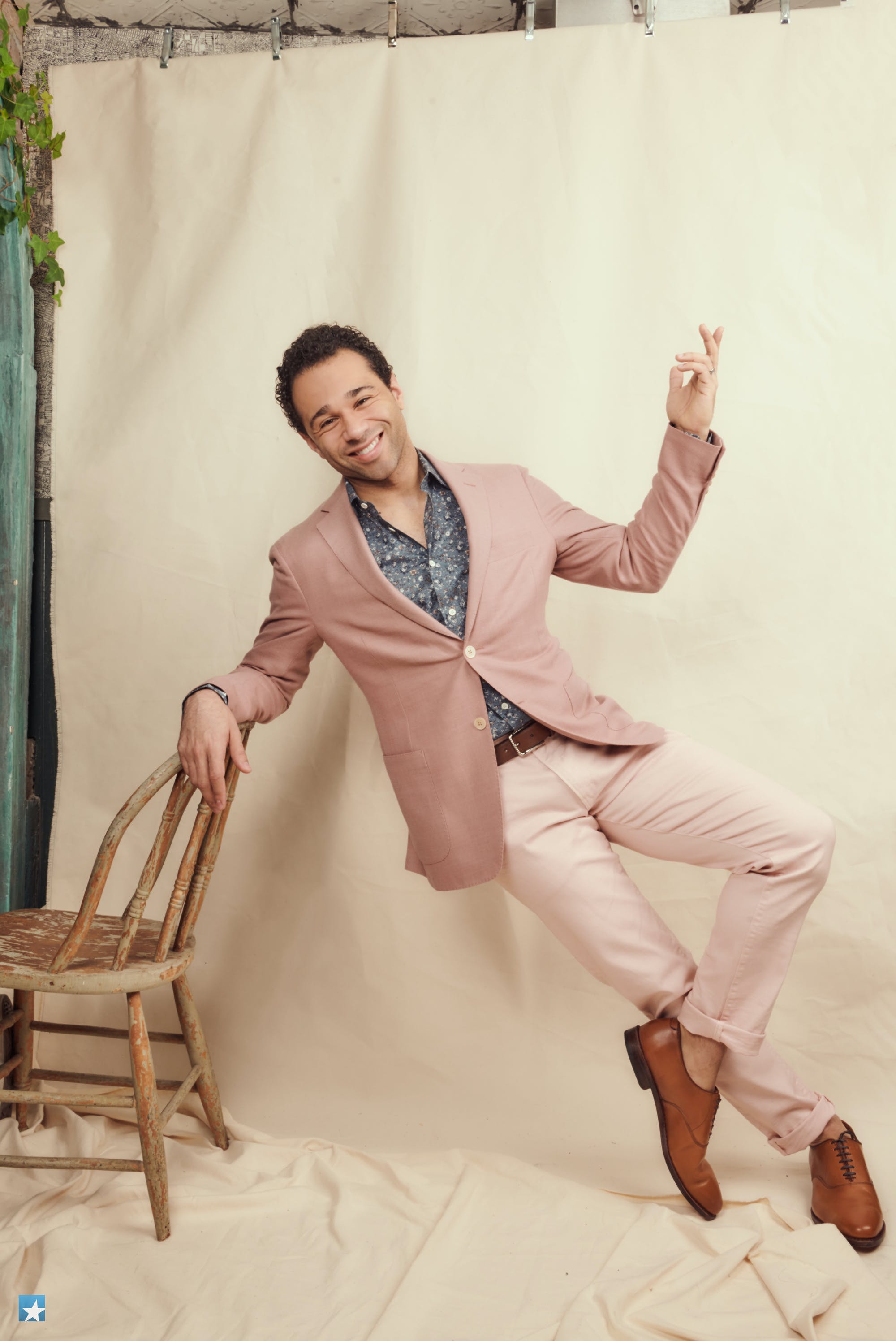 
Let’s start at the beginning. You're cast in Kiss Me Kate; where do you begin crafting your performance? What did you want to bring to this role in this revival to make it your own?
This show, as with a lot of golden age musicals, is dated. There are elements that just do not work with what we know now in 2019. Even in my song, “Bianca”, certain lyrics like, "you better answer yes or papa spank ya," can be a little cringe-worthy. I wanted to work with people who I knew would be mindful of that. Knowing that Scott Ellis was going to be directing this, I knew that the direction and the tone were going to be sensitive to making those specific changes. My process has always been a combination of doing my own work and finding backstory, but also knowing that you can only do so much work, because once you get into the room so much changes depending on what everybody else is going to bring. But when I first read the script, I just try to get an idea of what my own picture is. What would I like to see on the stage?

What was it like to work with Tony winner Warren Carlyle on this magnificent choreography?
It was an interesting process because Warren doesn't like to work with mirrors usually. And me, growing up as a dancer, I always want to be in the mirror. I want to know where my arm is. He had said he doesn't want us to judge the performance. He wants to be able to do it and let us just feel it, which for me was difficult to let go of for a while. But I think that it just forced us to rely on each other—Warren and I, and also just the cast. That's why “Too Darn Hot” doesn't feel like this step by step piece. It really feels organic, just performers coming together and messing around. So much of it is playing with each other once we're in the space.


What about your number “Bianca”, specifically? What was your initial reaction to it? How did it and you grow into what we see onstage at Studio 54?
Warren and I had a conversation about “Bianca” a few days before we started. I had talked to him about it being a tap number, and initially that wasn't his vision. He was thinking of it more of as a soft shoe. He wanted to make sure that he kept it easy. Everything else hit so hard, especially “Too Darn Hot”. It's so in your face and athletic, and he wanted to make sure that “Bianca” was charming. But I told him how tap is like home for me, and we ended up on the same page, and I'm so grateful that he took that and ran with it. Because we found out that Bill Calhoun's language is tap. So, he's writing this song for her, and it's terrible and not really going anywhere, and it's not until he puts it in his feet that suddenly it's clear and it makes sense.

How did the tapping on the ceiling moment happen?
That's another crazy part! We didn't add that until halfway through previews. Originally, I would go up the stairs and then end the number just tapping a little bit more on the top. But Warren and I felt that it just needed one extra level to end it, and he had the idea of putting bars up on the top, so I could actually tap on the railing. One day in the middle of previews, our carpenter crew came in and built the bars, and they reinforced the bottom bar so I can actually stand on it. As we were messing around with the bars, I flipped upside down and Warren went, 'That's what we're doing!' And now I have to do it eight times a week. 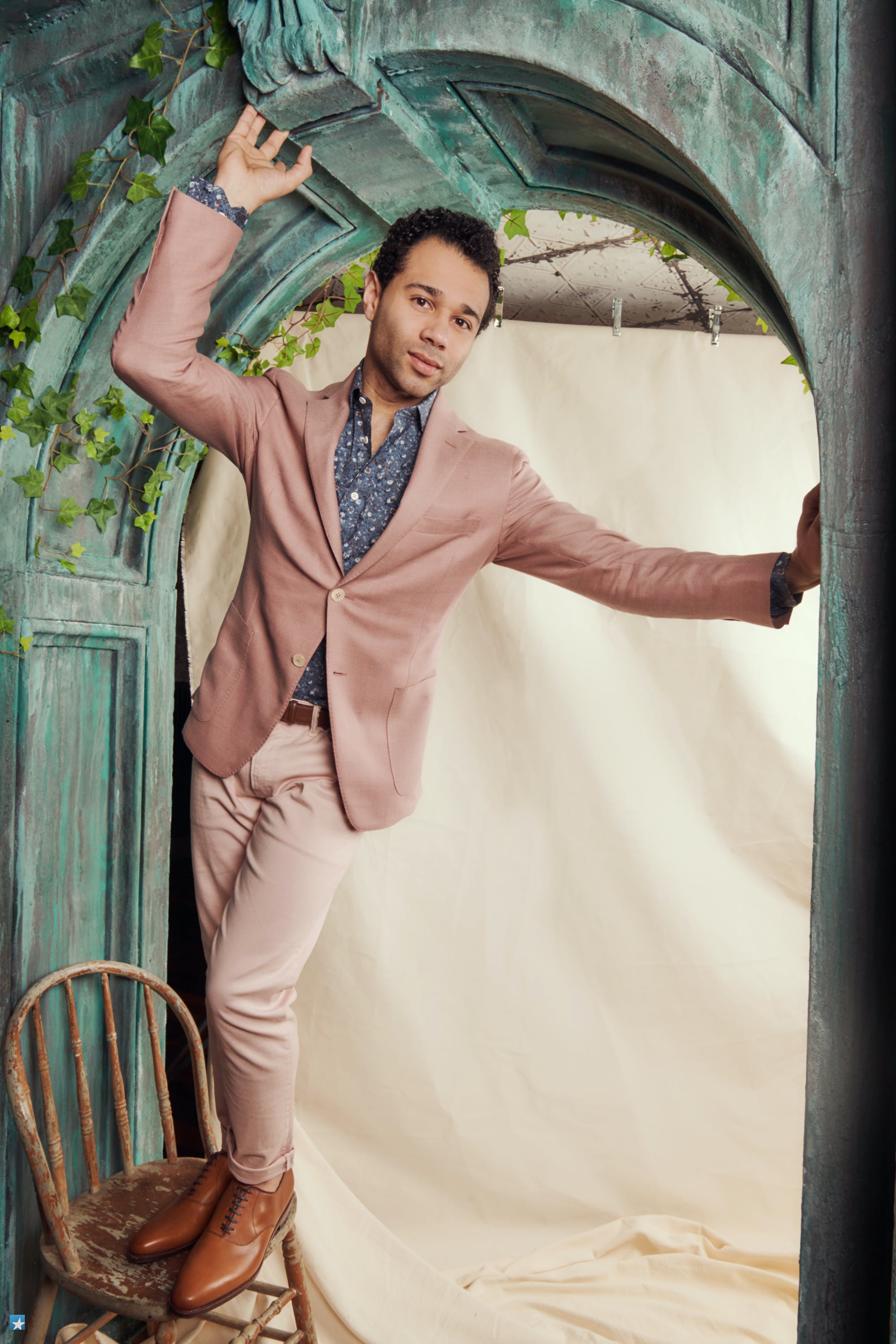 
When was the first time that you realized you were talented?
I remember the first time I realized I was a ham. I was always obsessed with television and with performers. They would turn on the television, and I was glued. I would recite movies from top to bottom. I would act out everything. Beetlejuice was one of my favorites because it was just so animated. I would act out every single line and all of the monster effects. Then, when I was five, my parents took me to see my first Broadway show, The Phantom of the Opera. I remember that clearly. I remember experiencing the magic—when that chandelier came down and the gondola ride. There's the one moment when the Phantom came running down the steps, and then he went through a trap door, and then came running down the steps again, and that was incredibly mind blowing. I just knew that I loved the magic of whatever performance was.

You bring such a classic musical flare to your performances in Kiss Me, Kate and Holiday Inn. Did you grow up with those iconic MGM films?
Absolutely! I also grew up watching musicals and all the old MGM films with Fred Astaire and Gene Kelly. I started dancing when I was two. I took my first tap and ballet classes when I was really, really little and stuck with it my entire life.

What were the first musicals that you were obsessed with?
Singin’ in the Rain, for sure. I always admired Cosmo for his energy, but I always wanted to be Don. 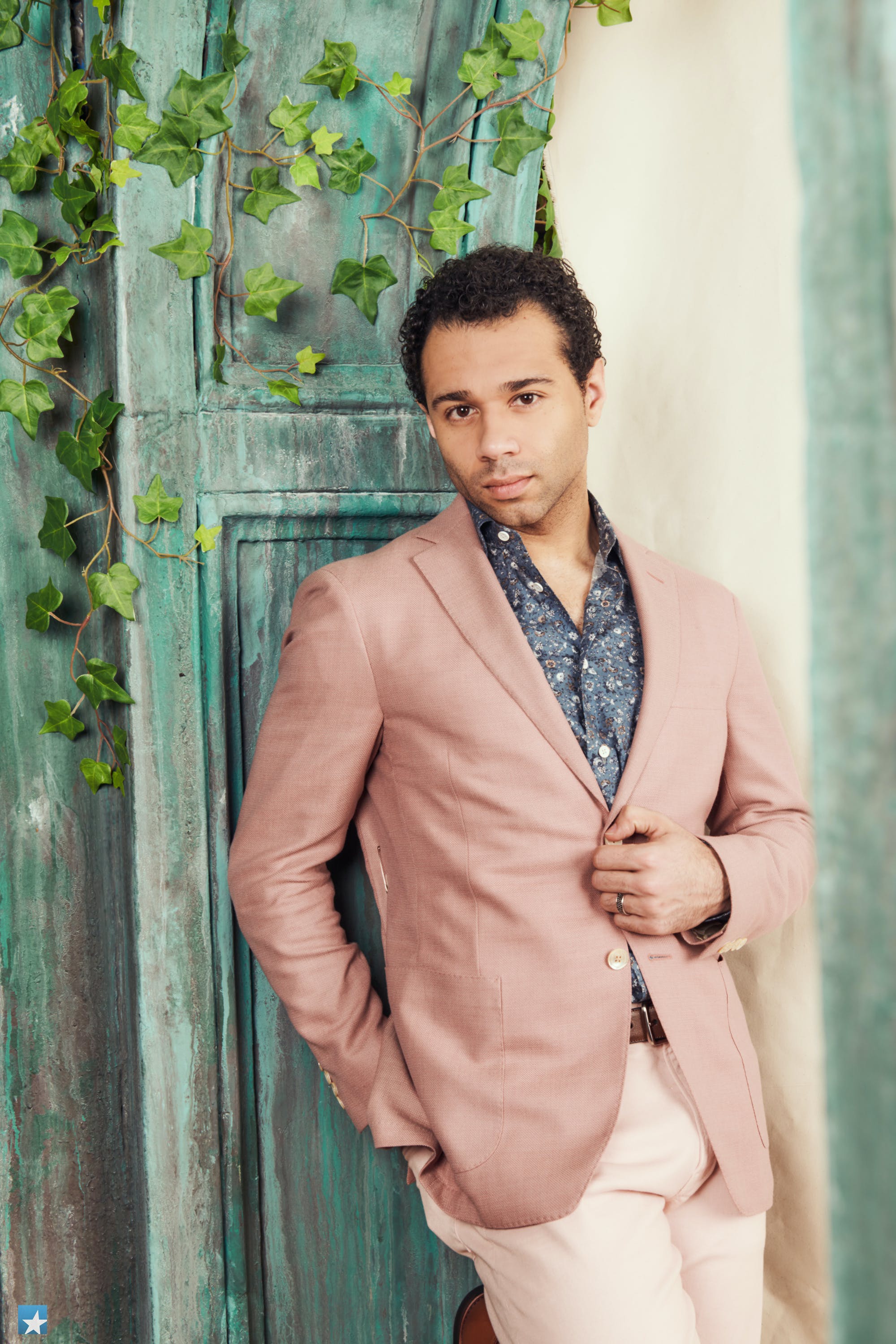 
So playing Don Lockwood at The Muny last summer must have been a dream come true.
It was. That was something that I had been wanting to do for a very, very long time, and I would really love to do that show again. It was so quick. It was only a week of shows, but, man, I got a taste of it, and I want to do it again so badly.

What's the most sentimental thing in your dressing room at Kiss Me, Kate?
I'm not into clutter. I like my space very neat and clean, and organized. The less clutter the better. Close friends of ours gave me a crystal and it's in the shape of a mushroom. It's supposed to bring you good energy. It's funny, it actually looks more like a little penis. Sometimes when people come walking in, they're like, ‘uh, what is that?’ 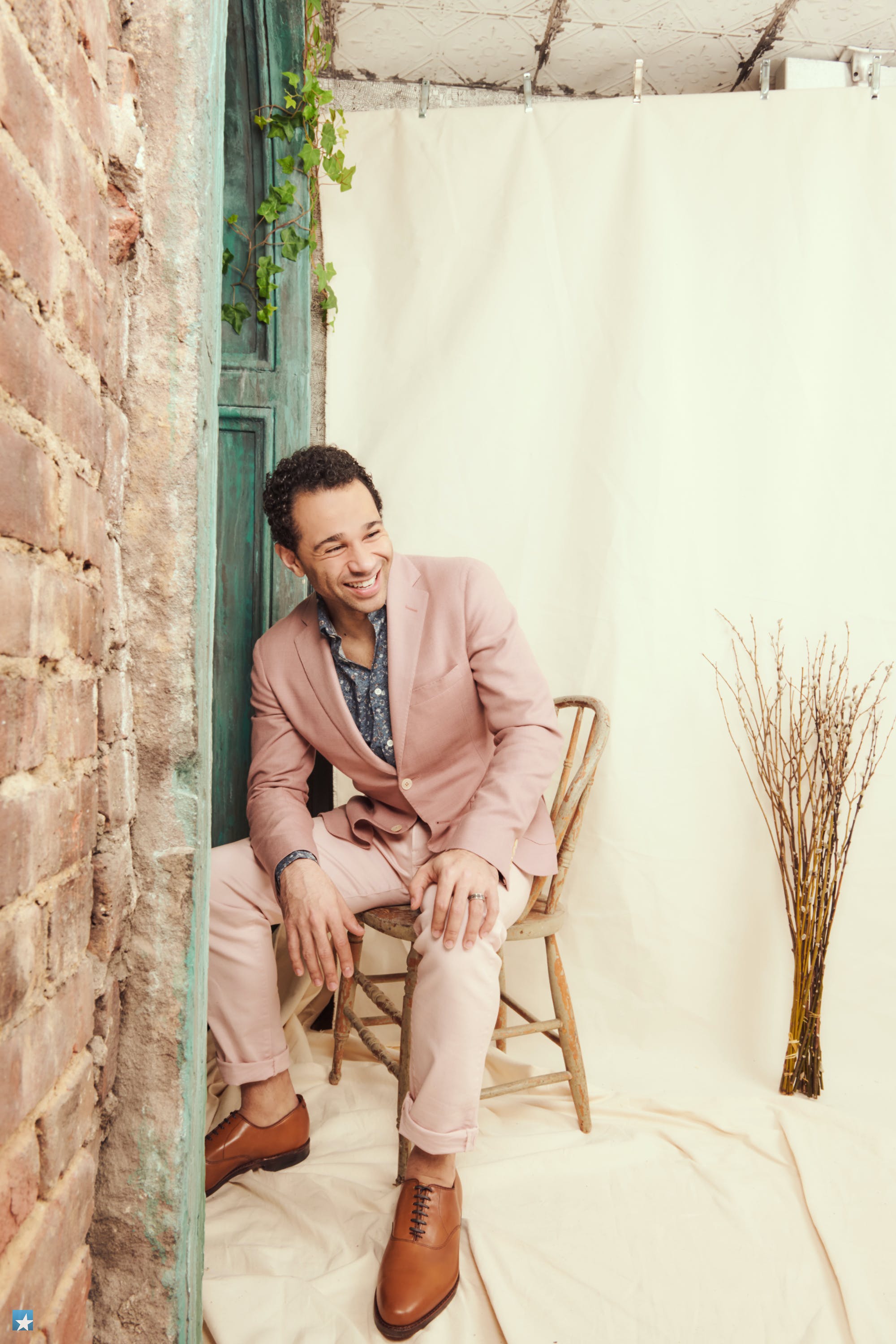 
Bill Calhoun is an actor and a gambler. What is the biggest gamble you've taken professionally?
Wow, I've taken a few in my career. But since we are talking about Broadway, I had an opportunity to make my Broadway debut before In The Heights [Corbin made his debut as Usnavi in 2010] that I ended up saying no to. It just wasn't the right role. That was definitely a hard decision. Most people knew me from High School Musical and Disney, and I knew that my coming out party on Broadway needed to be something that showed me in a different light.

You come off the High School Musical franchise, and you do a high-profile replacement run on Broadway, and that could have easily been it. But you've made a home on Broadway, each time pushing the limits of what you do onstage. What keeps bringing you back to this medium? How did you find that this was your place?
It just feels right. I'm happy, I love theatre and I love the community. I love being able to be on the stage and hear the audience. I've been very fortunate in my career to be able to take on roles that I feel I've been able to stretch myself in, and flex some muscles. But also, I feel like they've just fit well. As long as it'll have me I'll always come back to Broadway.