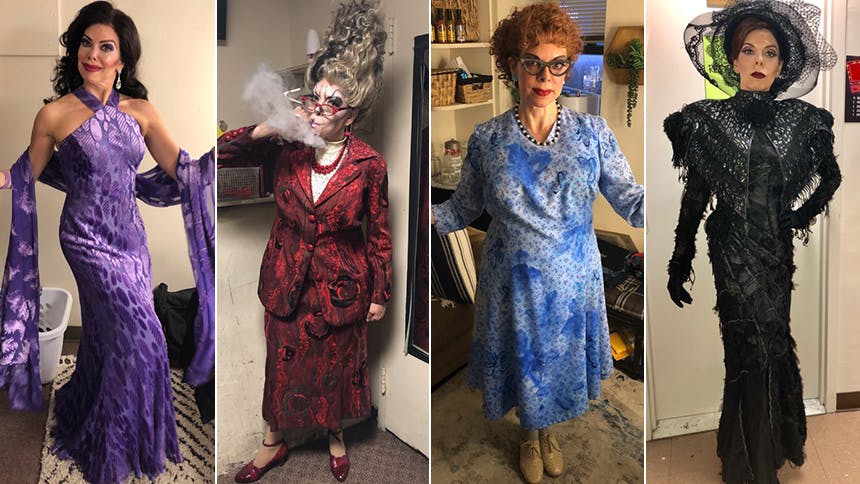 There's no way you walk out of Broadway's Beetlejuice

not talking at some point about the delightful, scene-stealing performance by Jill Abramovitz and what she wears in the show. Known for her memorable character turns in Broadway's Fiddler on the Roof, Cinderella, and 9 to 5, Jill once again makes a feast out of the featured characters Juno (the demon from hell), Maxine Dean (a hilarious Real Housewife -type), and the sweet neighbor next door.

Scroll on as Jill offers BroadwayBox a closer look at her Beetlejuice character track and her Tony-nominated William Ivey Long costume pieces. 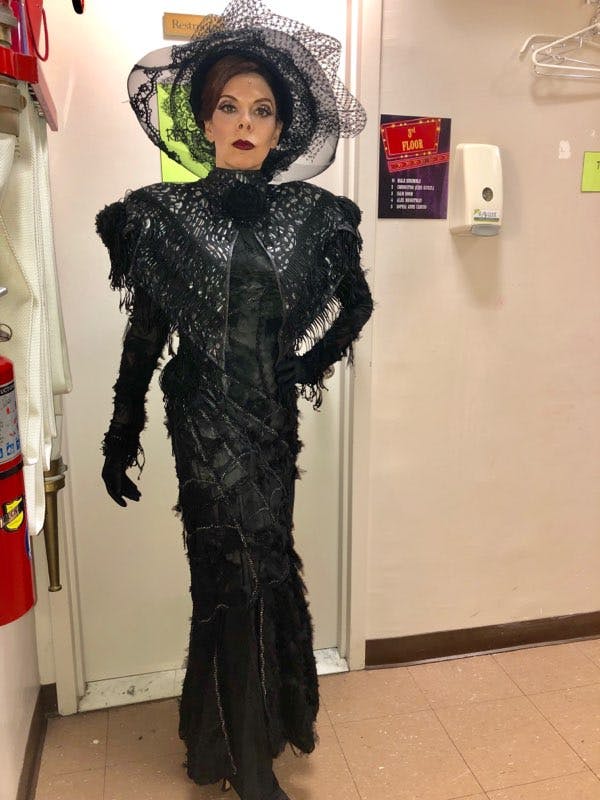 Okay—three words: William. Ivey. Long. Every costume in the opening number is a work of art. Instead of being just a bunch of black dresses and suits for a funeral, each costume has elements from different time periods and styles. Somehow, they all come together in this steampunkish collage of funereal gorgeousness. Plus, they have little macabre inside jokes—my dress has a silver spider web that goes across the front of the dress and leads to a spider on my right hip. And then that thing on my shoulders—it has a tail that goes all the way down the back. Like what even is it? Epaulets? A cape? Who knows! William invented it during a fitting, and it’s awesome. Also, that gorgeous hat. I get to feel pretty for a hot second before I descend into crazy lady land. 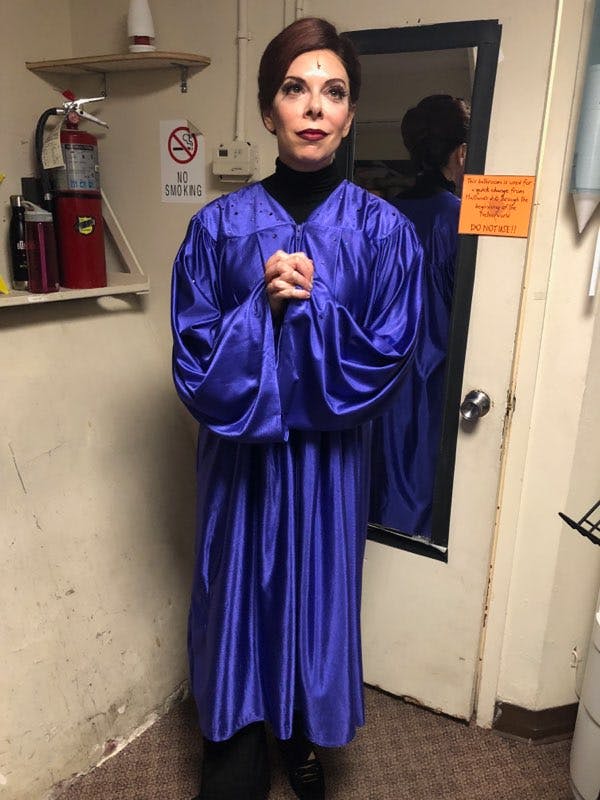 We get around a minute on stage in these bedazzled choir robes, and I think they’re hilarious because they’re so regular…in a show with green dancing zombie cheerleaders and monster sandworms. 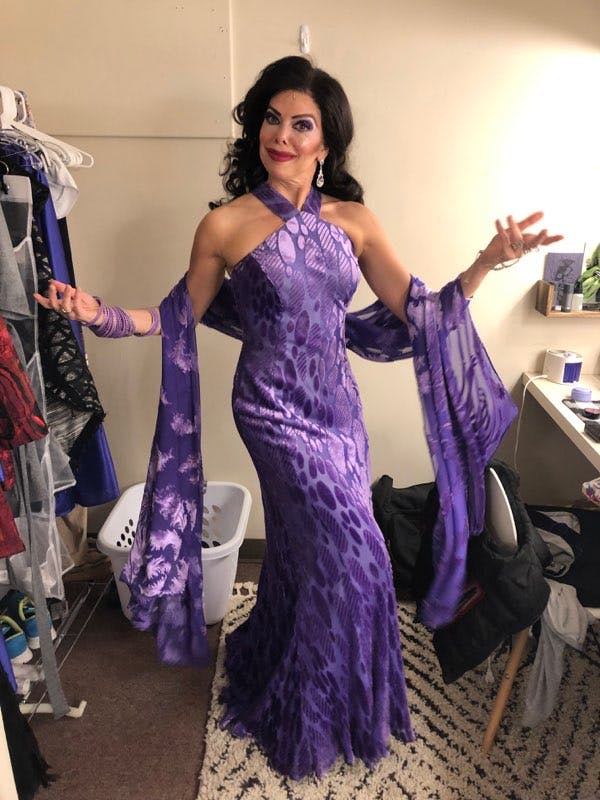 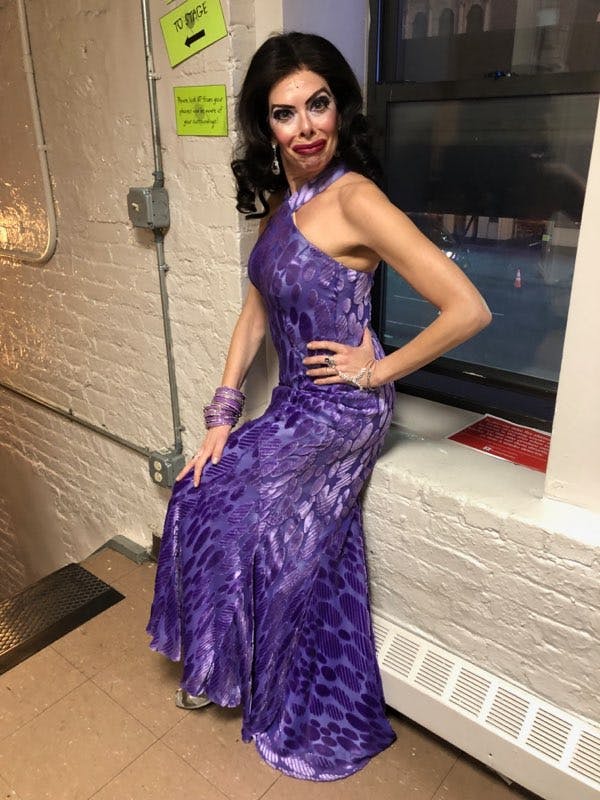 This Maxine dress is the best. In fittings, I used to say it was like a BMW—there’s so much engineering that went into creating it. It’s a body-hugging evening gown but I could do gymnastics in it. If I could do gymnastics. In fittings, William made me jump around, fling my legs over chairs—everything that Maxine does. He wanted to make sure that no funny was lost at the expense of design. And the design team agonized over which way the top layer draped so that the velvet picked up the light the right way. So much detail! After doing so many readings and workshops I thought I had this character down. But then I saw William’s sketches for her and I stole his ideas and she got weirder. 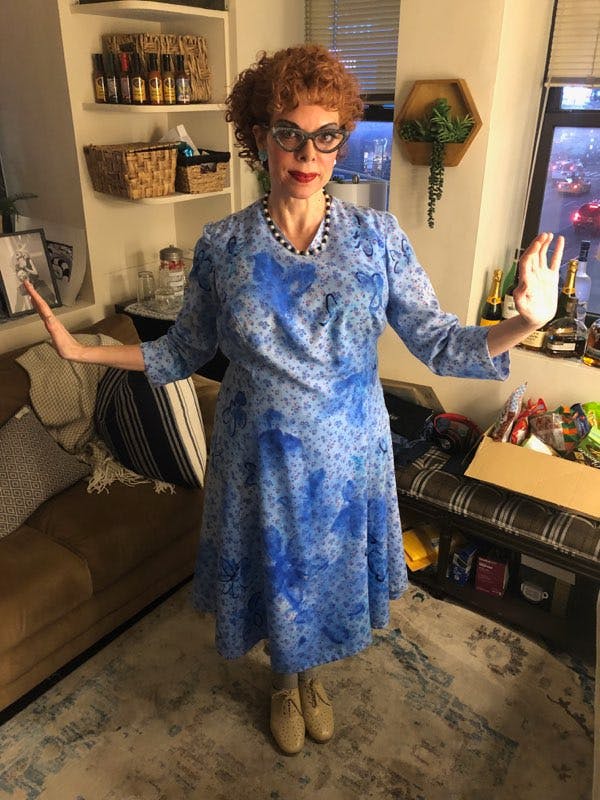 I wear padding for this and the rest of the second act and I love it, but at first it felt extra heavy and I couldn’t figure out why. Walking up the stairs to my dressing room after my little tap dancing moment at the top of Act II, I’d be totally out of breath and like, “WHAT IS WRONG WITH ME???” Then one day, I passed Jamie from wardrobe holding two giant metal plates and he said, “I just took these out of your boobs.” The stairs got a little easier after that. The dress has hand-painted flowers on it that are recreations of Tim Burton’s early sketches. The whole thing, as well as my face, gets blasted with shaving cream every night. Exiting the stage, panting and covered in shaving cream, I usually pass Rob McClure on his way to the stage and he loves to say, “So that’s your life.”

The Magic of Juno 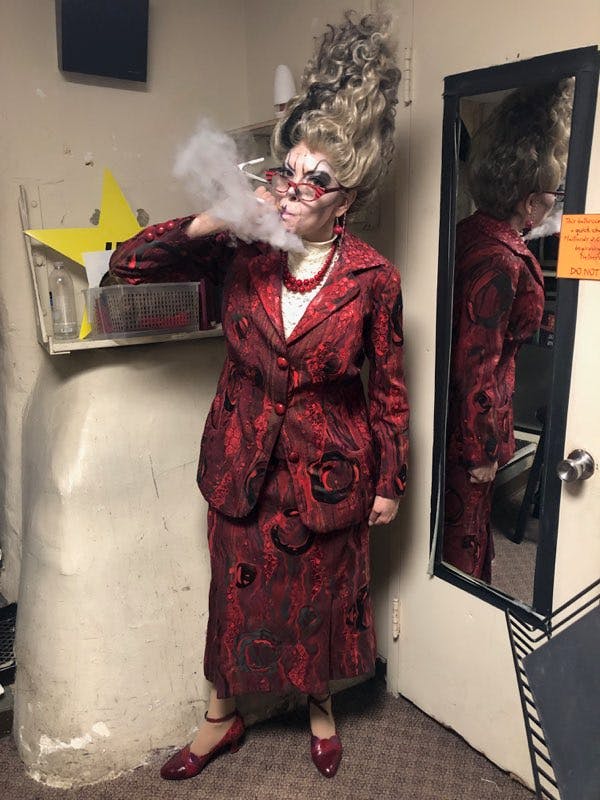 If the Maxine dress is a car, the Juno suit is an RV. It took multiple departments working together to make this. There are electrics, props, PVC tubing, all manner of stuff is involved in this thing. My dresser Liz and I have pulled muscles getting the tubing in the right places for the smoke trick. Also, there are hand-painted swirls of latex all over the suit. I think my favorite part of this (besides the smoking neck, obviously) are the dainty ankle straps on the hand-painted shoes. Juno is a literal demon from hell but she’s got these slender little shoe straps. Also, this wig. It makes me probably over seven feet tall and I’m always forgetting and walking into doorframes and low ceilings. 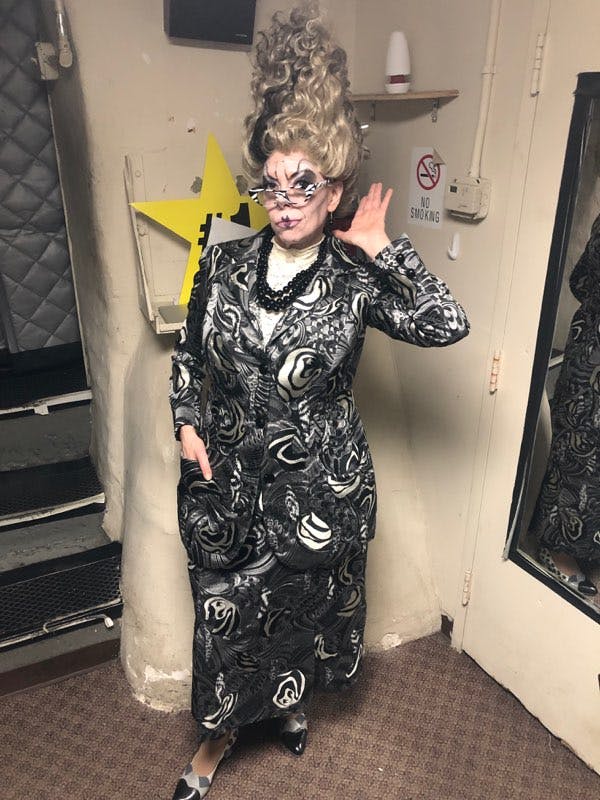 Everyone gets a black and white costume for bows. Some of us have exact replicas of our last costumes—just in black and white. That’s what this pic is. When we first got our black and white costume I forgot to change into it one day when they were taking press photos during a show and I went out in my red suit. I was mortified—pretty sure I ruined that photo. One last shout out to William’s whole team—they are the BEST! Paul Spadone, Tina McCartney, so many others—they’re creative and collaborative McGyvers who also happen to be fun as hell to hang out with. This track is a character gal's dream come true—they're a huge part of that.